Question, how many have noticed the crappy silver metallic plastic molding on dyson vacuum parts? By crappy I mean the messy flow lines where all the metallic particles are bunching up.

For example, noticed and cared, don’t care, didn’t notice, don’t care cause the customers don’t care, etc…
( no need to praise dysons revolutionary engineering, form factor, and colors, that’s what makes it an interesting subject for this boring cmf question )

It’s there, but my eye is distracted from it by the form and the high quality finish painted components. It’s kind of an inevitable characteristic if you’re using metallic effect injection molded plastic. Doesn’t really bother me.

I notice it, but it doesn’t bother me more than the clumps of cat hair stuck in every crevice of the device…

It’s kind of like a crappy paint job on a car…sometimes it’s good enough that from 5 feet everything looks fine, as long as you aren’t right up close.

From the average distance you can’t notice most of the knit lines.

I find the entire design a hot mess of forms trying to hump other forms, so it fits. There seems to be little thought as to why I should be vacuuming my home with something that looks like it came off the Millennium Falcon, and has a multitude of tight radii to trap said dirt. I go with Miele. Simple, understated, well resolved.

I find the entire design a hot mess of forms trying to hump other forms, so it fits. There seems to be little thought as to why I should be vacuuming my home with something that looks like it came off the Millennium Falcon, and has a multitude of tight radii to trap said dirt. I go with Miele. Simple, understated, well resolved.

well said. functionally though, dysons are pretty much what they’re cracked up to be. since the beginning, i felt like their visual identity was a calculated attention grab. i would imagine that if the company is still doing well in a few years, they’ll tone it all down a bit.

I have never cared for Dyson’s aesthetics. I even remember the first time I saw there vacuums and thought this must be a joke. The silver finish was a dead give away that it was a cheap vacuum then you look at the price and it is $500. I was confused I thought it looked cheap but cost a fortune. I was not impressed and consumer reports generally are unimpressed also.

Most people have their first look at a Dyson on one of the TV spots. Then they go looking for it in the stores. The flow knit lines and weird effects don’t show up as much, on TV. The promise of cleaning well, does. It doesn’t have the fit and finish of a product demanding that much money, but Dyson really changed that game, and most of the rest of the manufacturers followed their lead. I noticed the crappy metallic plastic effects but didn’t care. The customers don’t care either - isn’t Dyson a billionaire?

I have a cheaper Dirt Devil tornado-style knockoff which cost about 1/4, is a grape bubble gum shade of purple without the metallic effects, and is still working decently after four years.

I have noticed, but I think Dyson’s are way to expensive (like Slippy). I use an 8 year old LG. Mind you, the LG has fallen apart. The handle has been missing for 5 years, the door that holds the bag in broke 3 years ago, but it works.

I’ve found all of Dyson’s vacs to be mostly gimmicks.

Who vacuums like they’re driving on a racetrack anyway? (I’m looking at you Dyson Ball…)

Electrolux does a good job as well.

I bought a referb Dyson about 5 years ago and that thing is a champ.
I agree about the aesthetics but the vacuum is like a self contained master class in plastic part design. So many assembly features its crazy.

A friend had a Dyson ball vacuum cleaner and well, it sucked.

The maneuverability was great, as claimed it moves like no other vacuum cleaner; but the cheap plastic really turned me off, especially the tiny trailing wheels (which Mr. Dyson fails to mention on his commercials) that support the upright section.

A friend had a Dyson ball vacuum cleaner and well, it sucked.

No tricky mold details, just white and gray plastic. It’s the rotating hose joint/electrical connection that sucks. It’s a canister style machine that is pulled around by the hose as your vacuum. Within three months the wiper-ring that conducts electricity to the beater went “intermittent” whenever you pull the machine. No factory fix. No customer service. But WTF, we only paid $1,100 for it.

Lew, did you notice the Oreck among this year’s IDEA winners? 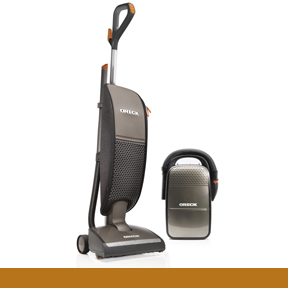 Lew, did you notice the Oreck among this year’s IDEA winners?

No, I did not. But I try not to notice Oreck at all anymore… they make that vein on the side of my forehead stick out.

They have revamped the “hull” of their canister line (the power head is essentially the same), but have not changed the “mechanics” of the rotary/electrical joint. FAIL!

When I confronted the Oreck dealer with the question, “Just how am I supposed to move this machine around if I don’t pull it by the hose?” he answer was that it was designed to be pulled by the handle … I’m going to vacuum the carpets standing up, and then lean over every time I want to move out of the radius of the hose length?

I have a Dyson but I miss my moms old Electrolux Canister vac…my Dyson is great at getting insignificantly small particles and dust, but terrible at getting giant pieces of crap that are stuck to the carpet. The electrolux would just suck everything up with a voracious whir and crackle.

Im always wondering how involved (percentage of hours put in) product designers should be in the final production and finishing. Like in this case the designer could work/push the engineers to manage the flow lines better, find a new plastic supplier, etc. Knowing that the customers don’t notice or care, why should we.


When the iphone 4 jonathan ives video was posted on core77 and he was saying he was proud of how slim they got the tolerances on the sim card slot, many of the reactions from core77 designers/friends were very negative, confused how that was innovative, and how it was gonna save the world, etc.

Don’t confuse people who reply on blogs with reality

I’m amazed at the fit and finish on the SIM card slot. The right people care about this stuff not because other peoe notice, but because they notice. I don’t do it for the general public, that is a slippery sloap of lowering standards, seeing what you can get away with. I do it for me. It it meets my high standards I put on myself, chances are it will meet the public’s expectation as well.

I’m all for making money, and delivering a good product at a good price that solves a real problem. I also think we can do all that while creating something that inspires and goes beyond expectation. Something that aha to the highest common denominator.

I doubt Jonnathan gives a rat’s ass about the blog monkey comments. He did it for him.

Designers are typically the people on the team that are most sensitive to how the product will be perceived by the customer. There are times when a horrible fit is acceptable (we are designing for price only). However, with a product like a Dyson or Apple, where it is at the high-end of the category, the customer demands to be delighted by the design details of the product. Not verbally of course, they aren’t aware they are being swayed by these details, but you see it in the performance of product-after-product (VW, Apple, Dyson, Swatch, etc)

I noticed the flowlines and they did bother me.

But I bought it because it is supposed to be the best vacuum_cleaner.
My mom has a generation one dyson. And it still works very well.

They over-engineered it. Made it to complex and thus it has more change of breaking down. Witch it did.
It still works but it lost most of its sucking power. And what gives with all the filters and maintenance. My car needs lesser maintenance.

I’ll never buy another dyson product again. And I used to be a fanboy.