This was on the “Spartan Carton” Reusable Six-Pack Carrier post…

Is this, like, a thing that people are doing nowadays? Very impressive. 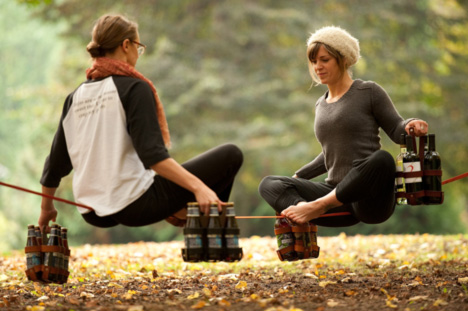 Is this, like, a thing that people are doing nowadays? Very impressive.

Well, these people are doing it… … and it certainly redefines the term wedgie.

It’s called (totally inaccurately judging by this photo) a slackline.

It’s called (totally inaccurately judging by this photo) a slackline.

Hahaha All so wrong. How is that comfortable?

If the two sixers that each of them is holding are empty, it might not be that uncomfortable… . .

I mean really… … . we’re losing some serious production manhours on a national level with this capricious behavior.

Whenever I see an inane hobby, I start getting angry. I must work like a slave, cause I don’t have time for any of this BS.

As for the original photo, it is two women. Perhaps they are used to wearing thong back underwear?

I wasn’t really thinking about what I wrote when I grabbed that “planking” image, I was just looking for an example. OBVIOUSLY the guy at the top, with the chainsaw hanging from his belt, was seriously productive.

Now we can add flossing (for a lack of a better word when sitting on a tight rope). woohoo.

You have to take the good with the bad with the Intrawebz.