Thinking of getting a new ride: colour edition

What is the best color for the big Audi. Remember all of them are kind of grey, nearly:

I must admit, I worked in the quiet to find a new family hauler. After sampling half a dozen cars
I’ll possibly convert and trade a Bimmer for an Audi. The reasoning on this would cause me to
babble and there is no time for that. As the A6 Avant is an outgoing model there are nice incentives
and I have to decide on the quick. Help me with the colour:

The car should read: “Managing Director”, not " I robbed the bank". 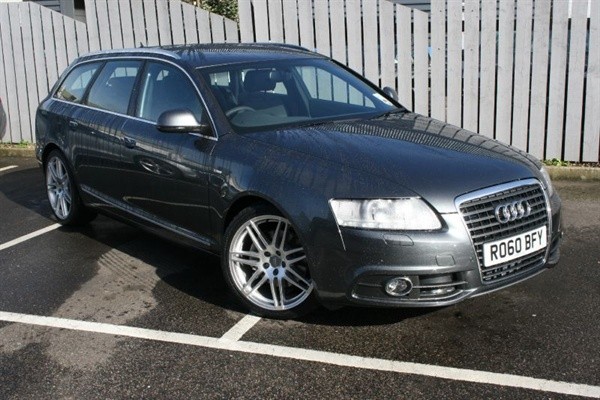 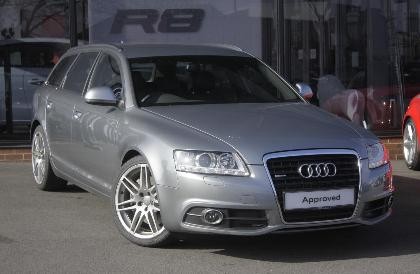 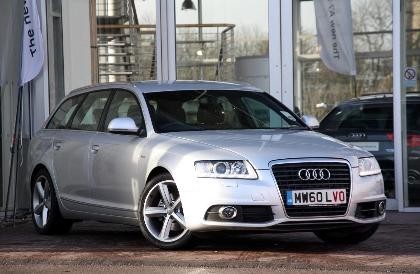 as you can upload only 3 attachments in a row the last selection comes here.
Sepang Blue, which is 2.000 Dollars extra, despite incentives… (ugh.): 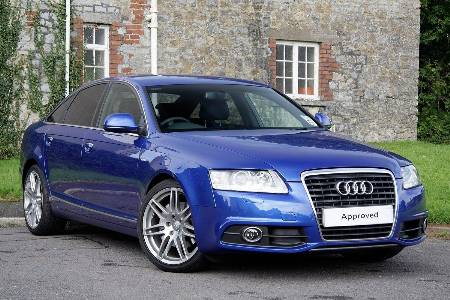 I like the blue, but I would never pay $2k for a color. My second choice is the Daytona Grey (has an Audi ever raced at Daytona?). Is that extra too?

I think here in Canada, Audi charges extra for everything but white or red.

Daytona w/ the Double spoke wheels. Unless you could get them to swap the wheels on the silver Avant to get Silver w/ Double spokes…

Love the choice though. I’ve been after an A6 Avant for quite a while.

Thanks, guys. For backing me up. I am just back from the dealer:

For the first time, ever I got a brand new car on order. (There is no stock left at the moment, as business has picked
up rapidly during the last 15 months. So if you want one buy one new…)

I went with the Daytona and the 7 Double Spoke wheels.

My wife and I would have loved the blue, as I used to have a Volvo in that kind of hue, but the salesman wouldn’t
back off from the 2.800 Euro hike. (Wrong conversion on my side: 4.000 $) I’d never pay that out of earned and
taxed money. This is for Lottery winners, only.

I can’t wait to get a seat in that new ride, I tell ya. But the delivery period has skyrocketet to 3 Months, as I heard
of today.

Wow that is absurd for the blue…I had the same decision on my TL, I ordered the car in dark metallic blue just like that (which is a gorgeous color) but ended up settling for silver when I found out it was going to be a 4 week wait.

The good news is gray will probably be easier to take care of and easier to resell in the future. Blue is very hit or miss with most people…but it does look nice.

What color ground effects lights are you going to put on it?

I went with the blue.

Nice choice. I would have gone with the Quartz first, the Daytona second, only because after having a black car, I know how hard it is to keep clean. I like the contrast (silver) color on the mirrors. Is that standard? Doesn’t show in the blue pic.

What interior color you get?

Blue is OK, but a bit boy racer more than Managing Director, IMHO.

Nice choice. I would have gone with the Quartz first, the Daytona second, only because after having a black car, I know how hard it is to keep clean. I like the contrast (silver) color on the mirrors. Is that standard? Doesn’t show in the blue pic.

What interior color you get?

Blue is OK, but a bit boy racer more than Managing Director, IMHO.

Nice. Reading the thread I wondered if I would be the only one to go with quartz first. I think Daytona and esp silver is too much “off-the-shelf”.
My audi is blue, which looked much more saturated in photos than in real life, when it’s actually much deeper and more subtle.

Ground effect lights, lol. Telekom pink, perhaps, but they don’t come as standard, sadly
*
The Quartz looks good on photos on a washed car but turns really flat and cold when
a little dirty. That’s why I placed it third.
*
The interiour is going to be black/black/black/black, with aluminium accents.
Half leather is always black on black and I passed on the silver contrast seams, as I
want to run that one for years to come, so wear and tear was an issue, too.

I’ll post again with pics when the car is here.

P.S. The aluminium mirrors are an aftermarket extra, that I like, despite not being a boy
racer.

I think that car is awesome. I like it in white, because it reminds me of the Millenium Falcon.

Time to get this thread going again with an update.

While 5 years back I asked you guys about the color, this time around it was a clear cut case…

First a duo of pics to remember the Audi. 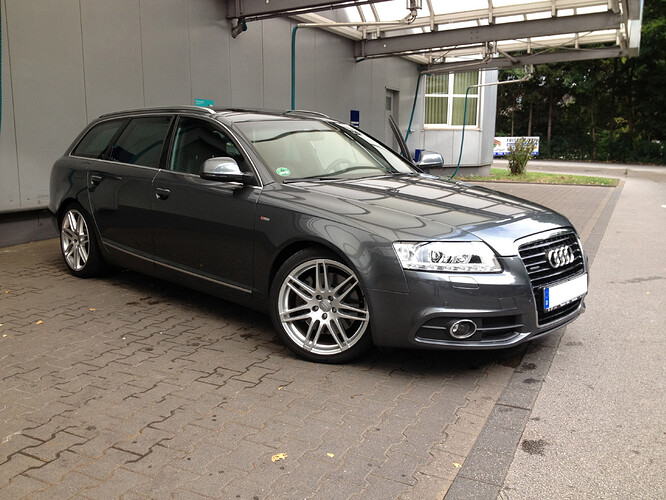 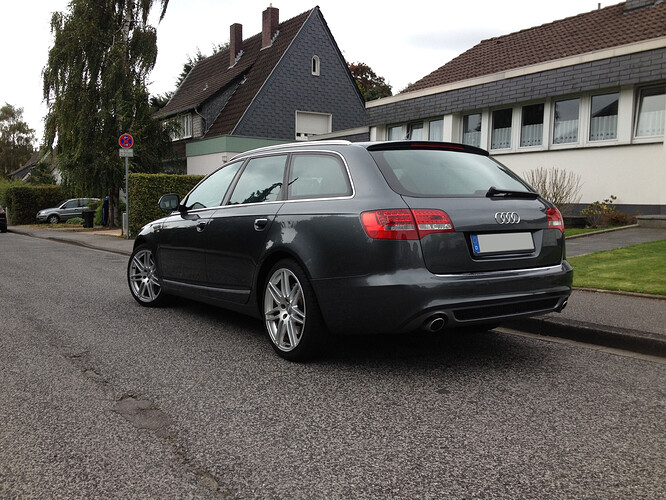 AUDI seemed not to care that much about keeping our business, though. Under the impression of the NOX scandal we were pretty sure to go gasoline engined this time, as fully electric is not practical right now over here. But Audi could not provide one of those within a 6 months time frame. I sampled same cars and came close to opting for a C-Class, but the current 5-series “end of line” specials were too good to pass up and the local dealer made it happen within 8 weeks, not months. So back to BMW, again.

The nicest thing about it for me is not the silky smooth engine, but the full length Panoramic Sunroof. That’s the cars feature, that I’d not want to give up. Closest thing to a convertible you can get (and in a wagon frame). Nothing beats the warm spring time air and chirping birds in the morning: 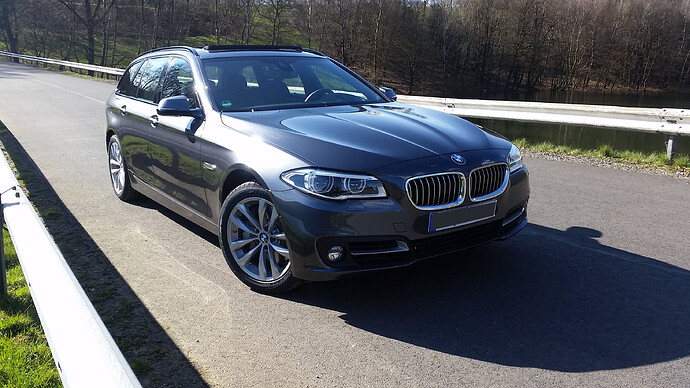 (The news is before the page break, sorry, but some more pics…)

As stated in the “high - five” thread, that I started when the current F10 came out I loved the exterior styling from the get go. It reminds me of the Alfa 166, but feeling more substantial: 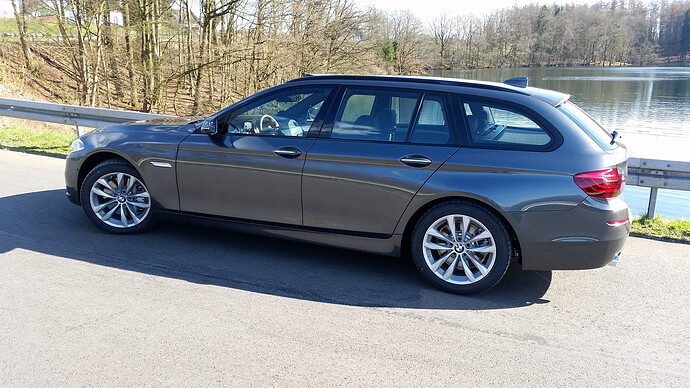 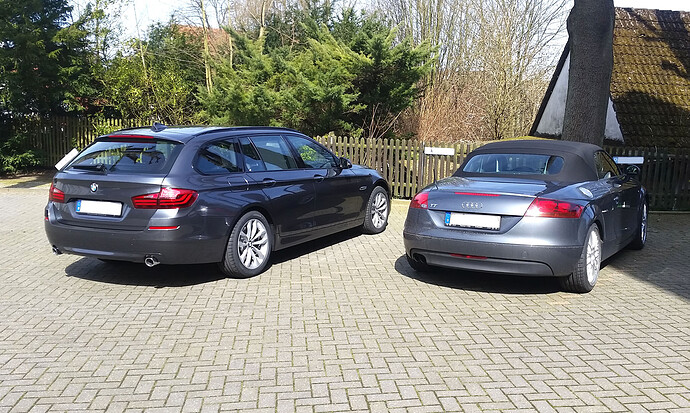 None of the cars shown here is mine. The German taxman likes corporations to run nice company cars…

Nice! congrats. I don’t think they sell the estate version in the US. Too bad, I think enough designers would buy them

Ugh. No kidding. There’s an E63 AMG wagon that prowls my neighborhood from time to time. Incredible.

Very nice! Love the F10 design.
The new 3 series wagon is a beauty too.