This robot is pretty nuts. check out the video HERE

I’ve seen this one before but now it DEFINITELY looks much scarier with the army gear on. I knew it was going to go in this direction. I believe somebody else in here posted that one day we’ll be battling these things!

In March, I said I’d be manning a turret on the roof of my house in 10 years fighting off an army of these things.

Anyone have a line on 50 caliber shells?

what got me was the part when it gets kicked and after when its slipping on the ice. creepily ‘natural’ responses. we are giving these things reflexes. there have been ‘learning’ robots for years now. i think they are closer than most people predict to becoming staples in everyday life.

Agreed, that slipping around is super creepy.

Scarey … indeed. It’s reflex reactions are bad enough, but the lack of a head-like appendage is especially unnerving. You can cut off it’s head but it still keeps coming…

At least it won’t be stealthily creeping through the woods … until it gets a muffler.

I’m pretty sure we covered this thing in a thread a few months ago.
Anway… this is worth posting again: 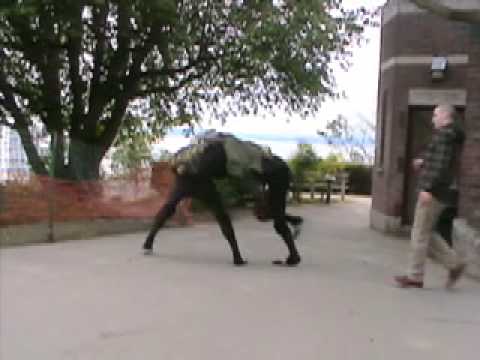 Nice. When I saw the actual robot I started laughing cause I thought it looked like two guys stumbling around, but this is much better.