Below, you will see photos of a townhouse for sale in the Des Moines, IA metro area. I show these to bring up a point / observation / question:

I don’t believe that good design / style is something that should be dictated, and I am all for people getting creative, but when I see something like this, I wonder…“Why!?” Did this person(s) honestly think that this looked good? Is there some synapse in their brain(s) that fires differently and thus allows them to see this in a different way than I do?

I don’t understand. Furthermore, I’m not sure I want to…

Boy, those townhomes look like some kind of architectual cut-and-paste gone wrong!

Check out James Howard Kunstler’s book “Geography of Nowhere”. He’s an advocate of New Urbanism design. Most suburban areas aren’t designed by architects but by builders and contractors who are after the $$$$.

Kunstler has some funny pictures on his site, kunstler.com of “eyesores”:
http://kunstler.com/eyesore_200803.html 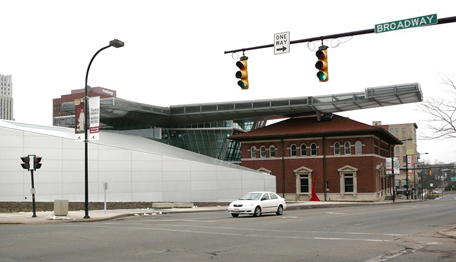 i suspect some kind of mental illness, not being sarcastic either. it’s funny though, it’s not cluttered with mess everywhere, and it looks like it’s furnished for normal use (yeah with wierd furniture,)… i want to know more about these people…

Check out James Howard Kunstler’s book “Geography of Nowhere”. He’s an advocate of New Urbanism design. Most suburban areas aren’t designed by architects but by builders and contractors who are after the $$$$.

Kunstler has some funny pictures on his site, kunstler.com of “eyesores”:
http://kunstler.com/eyesore_200803.html >

The crazy thing is that the March 08 submission for worst eyesore brings us back to…Des Moines Iowa!

Is there something in the water???

I’ve actually seen that eyesore (the pillar on the website). Its not as bad in person, but it looks very strange out there amongst the 2 story warehouses and cornfields. Its about 2 miles away from a huge outcropping of cookie cutter McMansions.

Des Moines actually has some decent things going on. A top 5 art fair, and the Des Moines Arts Center has some excellent pieces. Francis Bacon, Giacommetti, Oldenburg, Lichtenstein to name a few. Also has one of the best blues clubs this side of Chicago.

If you want a place with cheap living expenses, vast expanses of prairie and inexpensive housing… Iowa is the place.

I hope you’re right, Des Moines is now where I hang my hat. I’ve only been here a couple of months, but so far I’ve found the people here to be a bit…odd.

But from what I hear, the downtown area is booming compared to what it was 10 years ago. Cost of living is cheap, the winters aren’t as brutal as those in Milwaukee (where I was before), and it’s a short hop to my hometown of Kansas City.

If you like beer check out the Royal Mile or its German counterpart. Forget the name.

The blues bar is Blues on Grand.

Compared to Milwaukee, its going to be a bit different. But, its not so bad. Summers are nice.