I am curious people, what is your favourite razor? Are you an electric person, a single blade. a double, triple, quatro? Hah, it’s some preliminarly research for an extracurricular project of mine. Was there a great model that was disontinued? I’ve been born into the new generation of electric shaving contraptions…but i’m mainly curious to hear what you all use, used, or would like to be using? Also, does adding more blades really help?!

I have the toughest facial I know of, but also sensetive skin. I don’t like using a razor because it involves time and energy, and the way my beard grows after an hour no one will notice the higher quality in shave versus an electric. So that is what I use, an electric razor, the new Braun Activator.

I have to hand it to the boys at Braun with this new model. I used my brother-in-laws Braun XP II without him knowing, and I see that the activator gives a shave equally close, but in far less time. If you haven’t checked it out (I’m sure you have), check out Braun’s cleaning system, very cool.

As for razors, I found the two bladed razors gave the the best shave. Schick still has some razors where the razors can actually flex, that works well. Gillette has razors with little wires over the blades to help you from cutting yourself. I’ve found them marginally successful at reducing cuts, but they also reduce the closeness of the shave. Multiple blades tend to reduce cutting as well because the blades balance each other out, not allowing any one of them to dig into skin.

I’ve found with all razors though (non-electric) that I end up cutting myself often on my jaw right below my ear and on my neck. On my neck the skin is a little rough. When it gets irritated by the blade it makes goose bump type obstructions. These are then easily cut by the razor. The shaving cream helps with this, but it never eliminates it for me.

I started growing facial hair when i was like 7 years old, i was the wierd kid in jr. high that had a full beard. So i have been shaving for quite a while, personally i can’t use an electric razor, i have tried many and the outcome is always the same, i end up feeling and looking like i shaved with a chainsaw.

My preference is the Mach 3 but i must also emphasize the need for a good shaving cream, high water pressure to clean the razor in between each pass, and a conditioning after shave, if any of those are left out of the equation i get terrible razor burn and look like a plucked chicken.

I also make sure i always have a stiptic pencil in the medicine cabinet, they are 2 for a buck and last forever.

I also make sure i always have a stiptic pencil in the medicine cabinet, they are 2 for a buck and last forever.

ooh what is that?

I cant shave with an electric either…it somehow always manages to burn or irritate my skin. i need a good sharp blade. I currently use the mach 3. would like to try the quattro just for kicks. the mach 3 is ok, no extremely better than those disposable 2 bladed razors. 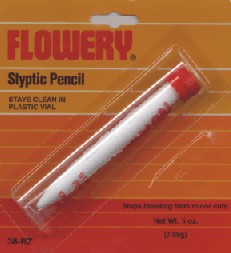 it stops the bleeding

I’ve tried the Quattro (got one for free at last year’s NE IDSA chapter conference). It looks great, and the quality of manufacturing is nice. The shave quality is not really any better than a 2 blade though:/

Bryan brings up a good point though…disposing of the goo produced from shaving cream and hair that is deposited on and in between the razor’s blades. That is indeed one of the low points of shaving with a blade.

This thread made me do something stupid.

I returned to my office and promptly threw the the apparatus in the “free junk” drawer, and there it stayed…

until today after reading and comenting on this thread, i somehow thought that maybe i should give these electric jawns a second chance since it has been years since i have tried one. So i pulled the bad boy out set it to the 100-110V setting charged it up and let it loose on my grill,
WORST EPISODE EVER

am I somewhat right??

(the bad)
-clogged up blades/cleaning diificulty
-probably only need 2 blades, not 3 or 4
-environmentally not great, and annoying to keep replacing heads

FEEL FREE TO ADD TO THIS LIST! and please reply is you agree/disagree with anything

Thanks again for the help everybody…
-Nate

I haven’t found an electric I like… I’ll have to try that new Braun.

I only use it in the shower… It’s held up pretty well and the lotion makes a big difference, but it’s still a lot of effort and the heads need frequent cleaning, which is a pain. (And the replacement heads are spendy!!)Because my hair is longer now and I shave in the shower it tends to pull small pieces into and around the spindles–this creates a gap between the cutters and the foil.

I love the ID on the thing (mine is white with acid yellow and blue detailing.) Philips at their best.

The new Braun will feel the same as the old Braun. There are two competing technologies in the electric shaver market, the rotary heads like Philips uses and the girating blades of Braun. I used to use a Philips design with the rotary heads, but I had the same problems that cg describes. I’m surprised they haven’t created a cleaning system for rotary types, because it seems like a bigger problem.

Good news for Switch is that I am going on vacation and will bring my Braun minus the cleaning base. I’ll let you know my thoughts on cleaning it by hand and also see if I have similar tangling problems that the rotaries have.

I like the braun stuff, works great though your beard has to adjust to it, takes about a week. I forget the model # but it’s the one with the in line trimmer, about $50.

Also, it seems that in general, if they worked at a slightly higher rpm, all the electrics would work so much better.

A hot shower, a Mach 3 and some Noxema Sensitive skin… I tried the 4 blade (Shick?) but it was much too harsh in comparison to the Mach 3.

Before the Mach 3, life was miserable

I am curious people, what is your favourite razor? Are you an electric person, a single blade. a double, triple, quatro? Hah, it’s some preliminarly research for an extracurricular project of mine. Was there a great model that was disontinued? I’ve been born into the new generation of electric shaving contraptions…but i’m mainly curious to hear what you all use, used, or would like to be using? Also, does adding more blades really help?!