There are some weird lines on the bumper under the headlights. Other than that, this thing is stunning.

Analog tach, no touch screens, 47 of 50 orders have been manuals.

I like it, not too fussy, but is bordering on bland
The thing that really draws my eye is the dead space between the door and rear wheel, it just looks long there.
Maybe a duct into the wheel arch or engine would have broken that surface up a little

It would be nice to have this discussion about a car (or any product) that wasn’t for the 0.01%.

That was my reaction too Iab… this kind of thing, an ICE engined hyper-car trophy to glorify some person’s mega amount of wealth just leaves me cold these days. It will mostly sit in a warehouse with 4-10 other hyper-cars that never get driven and won’t perform as well as an EV by any metric… I also get a bit of a corvette vibe for some reason. Like this could have been an early 2000’s mid engined corvette…

I get more excited about a Suzuki Jimny if we are talking new ICE cars.

Sorry for going even further off topic, I see the the car in the OP as a race car and yo has a point that an EV will crush an ICE, at least in the straight line. Which begs another question. How much weight do batteries contribute? I thought I saw an article about the latest and greatest EV wondercar coming in at 5000 pounds. That’s a frigging tank that won’t handle worth shit. So the question is, does the weight penalty of an EV make it uncompetitive on a road course (not an oval)? Who would win at Monaco, EV or ICE? (OK, maybe not Monaco, whoever gets to the first corner wins, but you get my drift).

I don’t know enough to really say. A lot of the reviews I’m seeing though are saying a lot of the EV SUVs are handling really nicely. Comparable to cars 1,000lbs lighter. I would think this is due to low center of gravity (all those batteries are below the floor), AWD, and good weight distribution.

RE range when racing, how do they handle it for Formula E? I don’t watch racing and I haven’t researched it but I know formula E is a thing.

EV range when racing is the same as ICE when racing, push harder, consume more “fuel” per mile

EV range when racing is the same as ICE when racing, push harder, consume more “fuel” per mile

If that is indeed the case, refueling ICE has an advantage as a race car requires more power (more batteries, more weight). Plus the actual fuel used increases power. It wasn’t that long ago F1 banned “witches brew” and standardized the fuel. That standard fuel certainly packs more punch than premium gas. And adding 500kg of battery weight on a 800kg car will ruin the handling (I remember the day when F1 came in at 600kg). At the very least, the extra weight will shred tires at a high rate.

A quick internet shows Formula E is 45 minutes covering only 100km. F1 is more than double that. With the complete lack of info, I come to the conclusion ICE will beat EV in a traditional road race.

Sorry Ray for the complete hijack. My ADD went off. Back to your regular scheduled programming.

Once at cars and coffee I did overhear a guy bragging to a group about all of the modifications he had done to his one year old McLaren. When he paused I asked him why he felt he had to do all of those mods to a brand new hypercar…. He looked down and said no matter what he did his neighbor always beat him off the line in his Tesla Model S.

Now you know I’m no Tesla fan but seems like their is a higher level issue when a full size family car is beating out a hyper car off the line. I assume this is why the La Ferrari went hybrid. ICE to charge the batteries, electric motors…. Another car that is irrelevant to me though.

I see Jaguar CX75 “Concept” in the headlights and Alfa Romeo 8C, though cleaned up, with the rear end.
I’m sure it’ll drive incredibly well, but like others have said it appears borderline boring. I know Gordon described it as inspired by cars like the Dino 206S and Alfa 33 Stradale but it’s so far from having their form, surfacing, and aesthetic emotion.

I actually thought of you when I saw it, Michael. 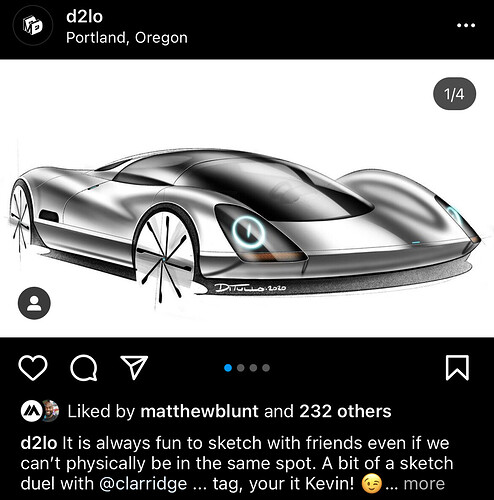 While I am already in camp Tesla I am still in camp Gordon Murray at the same time.

Thus I’ll have to make a point here, or two.
Having a sports car is not about off the line acceleration. At least not on the old continent, lol. 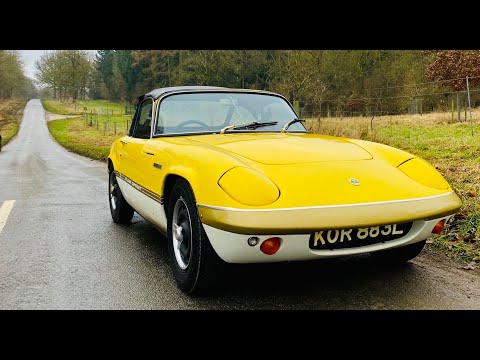 Apart from that Gordon Murray holds a special history within the car industry and he simply is a true british gentleman. Softly spoken and deeply knowledgable. Having been to art school painting and engineering formula 1 cars (Brabham) within roughly 15 years is quiet the background for what he is doing in his more senior years, when hitting the streets with GMA Gordon Murray Automotive for the first time.
The vacuum cleaner Brabham took me off guard when I was in first grade. Why did they ban it? I just could never reaquaint myself with racing, when the best concepts got banned… 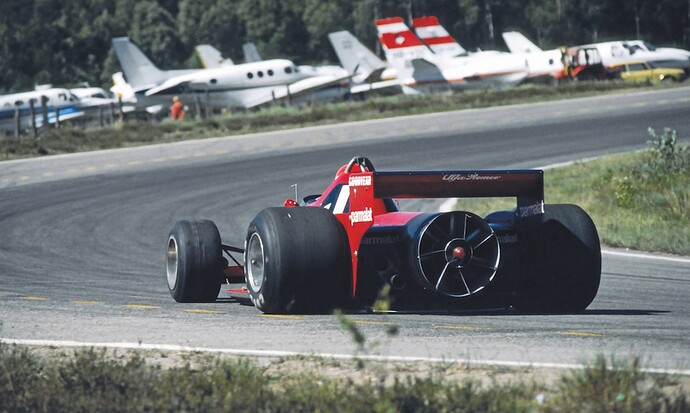 And I might be sentimental, but I just love the T.50 and how he revisited his wild youth with it. 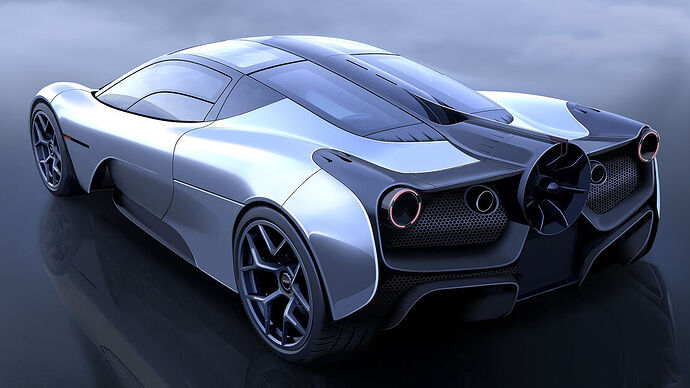 Including the orange middle seat. 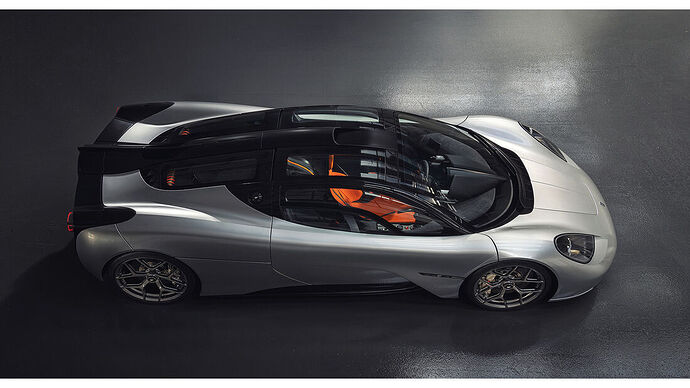 The T.33 now has a yello drivers seat on the side you spec it to. 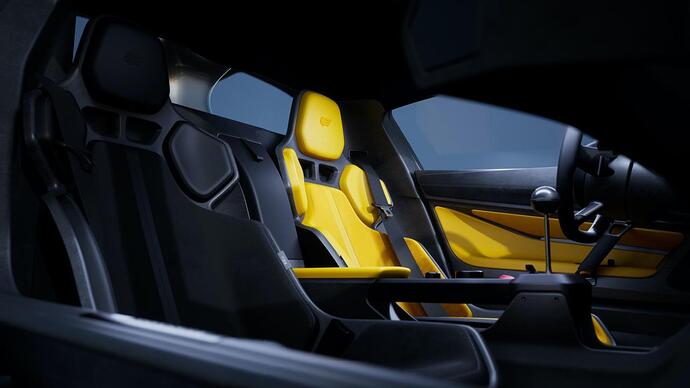 That is not automotive design. Spreading that color concept over a series of cars is art.
IF you have not gotten the message yet. I for one deeply adore what Gordon Murray is doing right now.

Everything that yo has said about the irrelevance of the supercar as a social concept not withstanding.
I would love to see Gordon Murray, Horacio Pagani and Mate Rimac compete on a different turff.
“Lightweight Zero Emission”

Gordon Murray made the inroads to that with the T.25 city car: 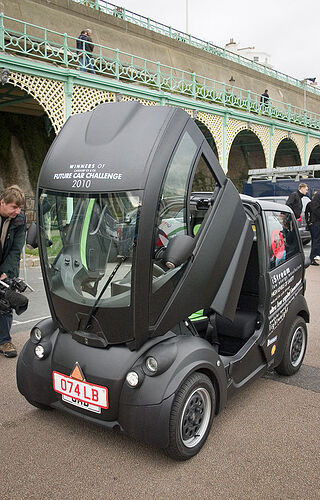 Sadly it was not electric. And a flop. So concentrating on what you are doing best might come naturally after that.

And in this case it might be aerodynamics. Building the T.33 without any visible aero might read a little quiet within the voices of all the supercar manufacturers, who are crying for attention right now. 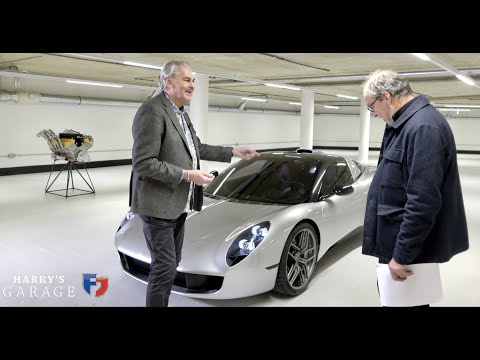 I do adore that.

P.S.: When Gordon Murray says, “we’re working on something that’s going to change the way we think about electric cars forever,” I got chills.

From what I understand, the T.25 just couldn’t find a manufacturing partner. I think there was an EV version too, at some point.

It’s also notable that Gordon Murray used to drive a Smart car nearly all the time. He had a '57 Thunderbird for the weekends.

EV racing: Until 2018, Formula E required a car swap half way through. Now they last. I haven’t watched a race, but I would suspect that some of the challenge is making the battery last.

Something more interesting to me, both as a fan and a designer, was the Isle of Man TT Zero category. It ran 2010 to 2019. There were basically no rules, so the bikes were always interesting. Most University projects, but Mugen and MotoCzysz made some incredible bikes just for the competition. Because they were custom, one-offs, they were built to tackle the circuit and were engineered to compromise the need for top speed (circuit is quite fast) and handling (ie weight). The riders were always required to ride with a certain rhythm or risk running out of juice.

As for the T.33, what I love is the return to form. Everyone, but especially supercars, are all wings and vents and slashes. I like how there aren’t any details on the T.33 that aren’t needed. 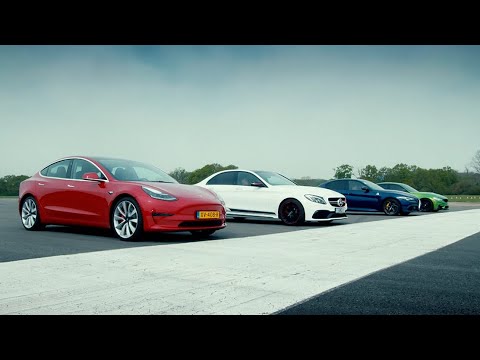 As for ICE v. EV on a circuit: 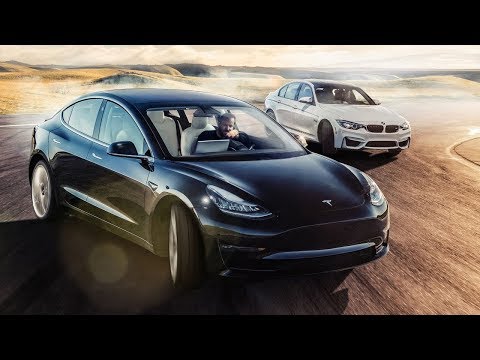 Having said that, the practicality of a gas refueling has some advantages. The closest circuit to me is 100km away. So I need 200km range just to get there and back. Circuit driving is going to burn electrons faster. However, there is a charging station nearby…maybe it’s doable if I’m patient.

One year, I competed in two autocrosses in my Focus. That’s a fairly soft version of racing and it used about half my tires up. EVs are actually known to use tires more quickly because of the weight, so a circuit day might kill your tires. That’s a bummer.

Model 3 (LR AWD) is much gentler on my tires than the Bimmers ever were. Or the Audi Quattro.
Track days may be one of the few remaining hurdles for Ev, though.
But not an important one. Proving it to work every day under every business/ family/ travel circumstance is much more meaningful.
To me.

For a track day a 2 ton car is shite, what ever engine you pick.
A little Lotus. Or Alfa or Spitfire on a trailer might be much more appropriate. But I for one would not go there anymore, anyway.
Too obsessed with hugging the planet, lately. Burning some dinosaurs for excitement does not cut it anymore.

And this is the biggest downside to the T.33, really.
End of threadjack from my side.

This car is for the petrol head crowd. This car is for them and them only. Even Gordon himself admits his inspiration for this car is from cars of the 1960s. When gasoline was allowed to enter the human circulatory system and speed was to be chased ad infinitum while inhaling fumes. Additionally, the guy is all about experimenting with placing aerodynamics at the center of the design, just as any proper 20th century designer of F1 class vehicles is.

This project, which is a much smaller piece of the vision to build GMA into a living breathing supplier of British automotive nostalgia, aims at building a brand firstly with those who have more money than they know what to do with (falconry anyone?). Introducing ICE racing heritage to younger generations is also part of the plan to separate the YOLO investor class with their cash.

The racetracks that supported this ICE nostalgia through the years are probably falling into disrepair now in Europe. If this idea takes off, there may be a plan to build more tracks in the African desert in and around newish high end communities. I wouldn’t be surprised.

Gordon has this idea that people will want to take this car on a weekend holiday (perhaps to visit a new racetrack) and they will need a lot of luggage space onboard. His suicide door luggage compartments on either side of the rear will take a feat of mechanical engineering dexterity to pull of that novelty. All of the thinking that has gone into this vehicle and the future HQ to support this platform has never left the small cluster of European Time zones which include the Gulf region.

That V12 engine and its companion sound and vibration quality is something an EV will never have.

This car will never be granted a visa to enter California. Which will make it all the more fun to smuggle it in and show it off at Pebble Beach Concours d’Elegance.

As for ICE v. EV on a circuit:

Thanks for posting. Most interesting. A 300kg weight disadvantage for the Tesla on a short (2-mile) and pretty tight road course didn’t stop it from winning. No doubt it will have increased tire wear and the BMW will have faster lap times as the fuel weight burns off, but a cool side-by-side nonetheless.

I believe the correct spelling is palate.

This is a pallet; 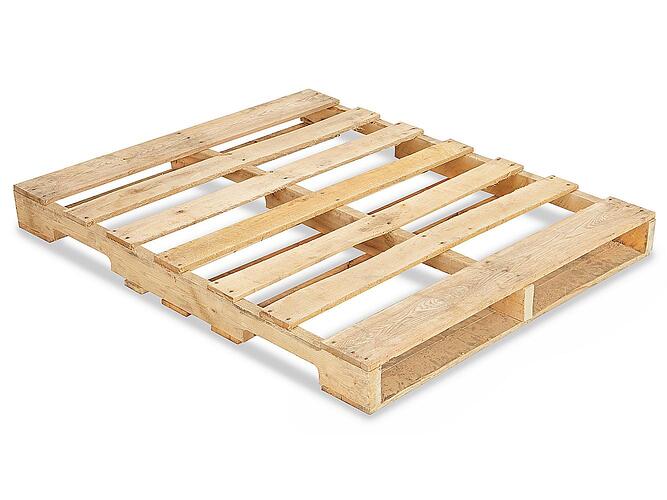 (unless of course you meant something to clean pallets with)