Small cars are the huge trend of 2006. As seen by the sales of GM or Ford compared to Toyota and Honda, this can clearly be seen. Therefore, I thought we should have a sticky thread where we can post about the latest and greatest designs and the real losers. Plus, random news and notes as the trend develops.

To kick it off, here is an interesting tidbit on the Nissan Versa:

The Nissan Versa, launched in Canada in July, is more likely to be purchased by men who are older than typical entry compact car buyers, according to J.D. Power and Associates. The Versa buyer is older than customers who buy the Toyota Yaris, but the same age as those who buy the Honda Fit.

It’s interesting, as it used to be Toyota was attracting older consumers. Also, it’s interesting to me that the Versa is attracting more men than the others. Especially when one considers that Honda has traditionally had the “sporty” image and the Fit has an sportier looking model with side skirts and everything.

Yes, US manufacturers may have been over-reliant on Large Trucks and SUVs, but that was where the money was. But, the Japanese companies moved into that consumer space too (Toyota Tundra and Sequoia).

The hike in gas prices - driven by speculators, not demand - has impacted larger Truck and SUV sales. The gas prices are subsiding now.

Looking at the US auto companies, I do not understand why there seems to be a disconnect between their US and European divisions. The Japanese companies bring the same small car to the US - Toyota Yaris, Nissan Versa (Note? in UK), Honda Fit (Jazz in UK) - Euro sites are always a little more fun - http://www.honda.co.uk/car/ . Ford has had mixed results with this - Contour | Mondeo - Focus (US does not even have the current Euro version).

So, is it surprising that the Nissan Versa is more likely to be purchased by men older than typical entry compact cars? Well, probably a big surprise to the ‘designers’ who were probably targeting Gen Y. Isn’t this what happened with Scion! Toyota were concerned that the average age of a Toyota purchaser was over 55, so Scion was tailored to the Gen Y consumers. The average age of a Scion buyer…is 45! As an aside: the ‘over 55’ is the market to focus on - Boomers, empty nesters, more discretionary income, etc.

PS JD Power? What do they know! They rank Ford trucks #1 on initial quality. What sort of ranking is that! How about long-term quality!!

If it weren’t for the price (and the fact that we probably won’t see them on this side of the pond), I’d have one in the driveway tonight.

The VW Eos is starting at $29k US, so maybe we are wrong to assume yanks won’t pay good money for this kind of car.

I am anxious to see the success of Saturn, because they are now selling Vauxhalls/Opels at pretty high prices. It’s a grand experiment: will Americans pay high prices for American branded cars? Even if the cars deliver on quality, handling, engineering etc?

I think if the Saturn experiment goes well, we may see the 2010 European Focus come stateside, perhaps even with a pretty CC version.

GM is really trying to seem on top of the small car trend. I have already seen a couple of new Chevy Aveos on the road. Much better interior, I would even say Japanese quality. Too bad it is a death trap…

Now, Bob Lutz is saying that the next generation Opel/Vauxhall Corsa will make the jump to North America…in 5 years when they redesign it. It’s always good to think ahead!

Well, since we were discussing parallel parking and ethics in the forum, here is a car that addresses both problems. Smart has shown the new 2007 Smart Fortwo, which will be the first available through Smart dealers in the US. Thankfully, the nose enlargement, needed to meet new safety standards, has not ruined the look.

The look makes me think of the orginal mixed with an iPod. What do you people think?

A new catch this week: Mazda 2 (Japan market, Demio). It is based on the 2008 Ford Fiesta platform, which I believe was developed with Fiat. Confused? Not important…look at the style of this thing:

Very sporty look for a small car. This thing is about the size of a Fit or Yaris. It has that tensioned surface look that BMW has done so well. It’s interesting to see how Bangle’s much maligned styling at BMW has now filtered down to all the Japanese brands (ie, Camry, Lexus, Mazda etc.). Those surface details are mixed with a certain Mazda DNA.

A dealer started carrying the Smart in PDX, think I’ll go test drive one next weekend…

Smart cars ive always liked since I saw them in Europe about 5 years ago. I think they came to canada 2 years ago, but havent really caught on.

Have you seen the new volvo C30?

Not bad for a hatch. Still does a good job a keeping the strong Volvo DNA in the front end and shoulder, and sorta inspired by the old P1800, but im not feeling the drop in the rear glass (nor are others who ive chatted with on seeing it a the Volvo SportsDesign forum launch in Munich)

If this market is so hot, how long can it be until we see a Porsche hatch?

I like the idea of smaller cars, but would rather see more along the line of the Ford/Newson 021C than also these hatches… 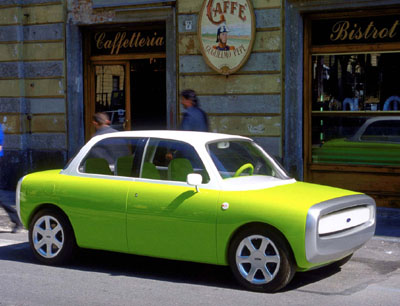 Yeah, I’m liking the big glass back of the c30, and of course the interior is nice. I always loved the P1800 series… the one in the show “The Saint” was sweet.

If Ford would come out with the o21c (or BMW, and call it a 2002) I would put a down payment down right away… though I’ve always had a spot for goof mobiles, I’d rather have it look goofy than “fast”

I dunno i dont like the larger glass. i think it would look better like this (excuse quickie PS work). 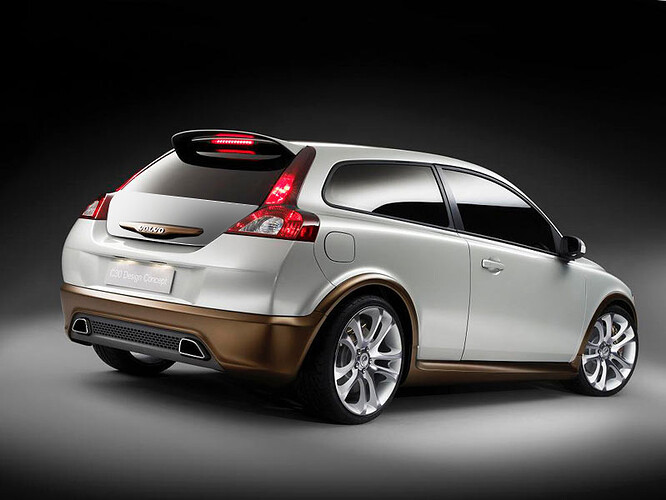 I with you Yo, on the “goofy compared to fast”. Mybe goofy isnt the right word (sounds like my Dad describing my unique preferences), but I agree in principle.

I just think there is something nice about cars that arent overstyled. Compared to newer cars, those classics seem more simple and honest in the forms.

Not exactly small, but I’ve also always had something for the old 80’s Volvo 240DL. Closest thing to the boxy simplicity of the 021C. I cant find a picture of the right model, but there is an earlier version that is 2door and even more basic in the front end with a larger grill and round lights I think.

I think you mean this Volvo:

The “flat” hood is actually more aerodynamic. Volvo won the 1980 or 1982 European touring car championship in a turboed 240 2-door much like this. Weird.

I like the big rear glass of the C30. I think it is a big gamble though, at least state-side. Americans have traditionally been paranoid about people seeing what’s in their trunk, and tend to buy cars with smaller and smaller windows (think Chrysler 300, Hummer, etc). That might be why it looks odd to us…we aren’t used to big windows anymore.

Also, the C30 is bigger than what I was thinking when I started the topic. The C30 is based on the Euro Focus, which is a compact car. Cars around this size have been sold in the US continuously from the '70’s. Sub-compacts, like the Fit, Versa, Yaris, etc have been sold before, but sporadically.

The reason for all the small hatches is simple as well. The decision to release these sub-compacts in the American market was taken quickly. No one had time to design, engineer and tool cars specifically for the US market. Instead, they shipped old European and Asian models. Luckily, Honda didn’t ship this over: 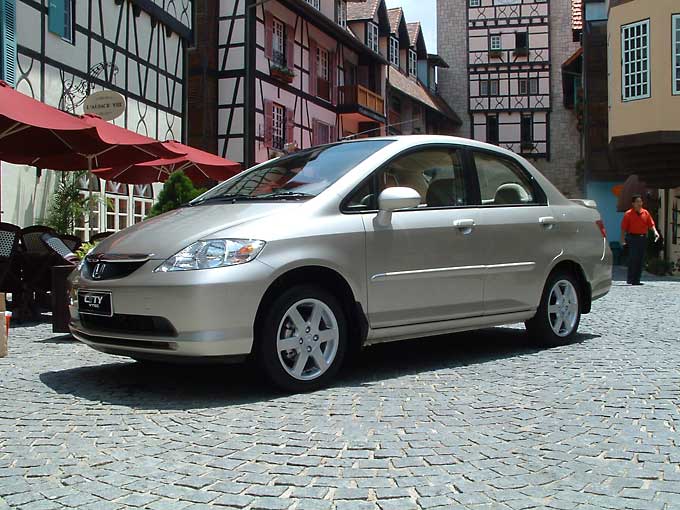 Honda City, a trunk version of the Honda Fit. Yuck.

Yup, thats the car, but 2 door I was thinking.

I take your point about compact vs. sub-compact car. For sure here in Europe there are a lot more from all brands that dont come over to north america. Most of them though, imho are pretty ugly.

interesting point about the glass. Im not sure if its only security feeling or also something about not liking station wagons too. Even though “hot hatches” are doing well, the regular wagon with larger usable space and glass doesnt get the respect I think it should have like here in Europe.

but thats getting off topic…

datsun should bring back the 510. mazda should revive the GTX moniker.

i would rock the volvo hatch.

i would be VERY interested in a compact luxury coupe with RWD. it’ll be a cold day in hell before i buy another dedicated FWD car.

i still drive a miata and the only car i don’t have to look up to look at the door handles is the lotus exige.

Yup, thats the car, but 2 door I was thinking.

The 2 door is called the 242, pretty rare here in the states.

the bmw 1 series sucks. better than the 318 Ti they had a few years ago, but still pretty bad on the performance side and looks like a squished 3 series.

How come there arent more subcompact cars that ARENT hatchbacks? Like the ones discussed earlier (021C, etc.) i think there would be more of a market for a small car that is just a small car. Or is it just the mentality of wanted more “value” to have a bit more space to carry stuff that you will never use?

Just read Robert Cumberford’s review of the Nissan Cube in this months Automobile, supposedly the next generation will be global… US included.

I caught pieces for the FutureCar show on Discovery Channel in the US. Interesting perspectives, especially from the energy perspective…cars running on compressed air!

Also included was a look at ‘interns’ at GM exploring ideas on the ‘car of tomorrow’!

Check the webisodes showing their process.

I caught this too. I loved it! I was glued to the TV for 3 hours. I’m considering purchasing the DVD set. The GM intern portion was great content.

There is no way this will make it here, but I’m sure designers will love it: