The Rise of Skywalker - SPOILERS

Vader only let out a grunt because in contrast to those other two cuts, Vader got chopped in the machine parts, not the wetware parts.

Does Vader have some special Sith metal that is impervious to light sabers? Battle Droids halves fly all over the screen any time Obi Wan and Qui Gon are near them.

I’d have to think if you were unique in all the galaxy, and had the means to build entire Star Destroyer fleets and 1 2/3rd Death Stars, you could get as much beskar’gam to build a Vader armor suit (finding a Mandalore smith to actually build it, IDK). Luke in ESB didn’t have the requisite strength/Force to cut through the armor but obviously did by RoTJ.

My gf’s son asked why nobody ever turned their lightsaber on and off quickly on, say, a massive downward strike. Turn off the sabre to avoide the block from your opponent, turn it back on right away to slice them cleanly in half. The little turd really messed with my perspective of every light sabre battle ever had.

Went to see it again last night. My daughter hadn’t seen it yet and we decided to make it work.

I have to say, second time through I liked it more. It’s growing on me and I find the flaws to be far less glaring than people are making them out to be.

I still land on the same platform as most that the Ben/Rey kiss was unnecessary. I would have been more satisfied with a tension-filled hug prior to Ben’s death.

After the first viewing, I was suspecting that Finn’s confession to Rey was his love for her. After watching this, I am starting to wonder if it had more to do with him having Force Sensitivity and the love interest angle was more of a Red Herring.

If I put on my critic hat, my only real complaint is that they went the completely safe route but also seemed to abandon the Skywalker Hero’s Journey. Even though Carrie Fisher died before Leia was able to have her time in the sun, I still believe they did the series a disservice by keeping Luke as a good guy. He was deeply entrenched in the Dark Side during Return of the Jedi that he should have been the bad guy in the final trilogy rather than Ren/Emperor.

Lastly, Babu Frick rocks. I think I like them more than Baby Yoda.

Ha, totally agree. Babu stole every scene he was in

I’m looking forward to seeing it a second time. Maybe this weekend.

I haven’t seen the new one, but I’ve seen 5 out of the 9. I was actually thinking it might have been better had we only had a New Hope and the other films were never made. Then we could imagine whatever we wanted for the rest. “Once the music leaves your head, it’s already compromised.” as they say.

As for light sabers, remember SW was a total rip off of Akira Kurosawa samurai films. The light saber is just the techy way of having a sword fight. It would make more sense if everyone had blasters, but those with the force could bend time and space à la The Matrix. Lucas wasn’t creative enough to come up with something like that. They don’t make any sense, but none of it really makes any sense.

Last note on SW… I watched IV and V with my son, but I kinda don’t want to see VI with him because of the way the Ewoks are used as canon fodder. Is this a legitimate moral quandary or am I eating too much granola?

Last note on SW… I watched IV and V with my son, but I kinda don’t want to see VI with him because of the way the Ewoks are used as canon fodder. Is this a legitimate moral quandary or am I eating too much granola?

I lean towards the granola argument lol

You can’t abide teddy bears getting squished, but Rebels getting blown to smitherines by ATAT walkers is cool? I love Canada.

The Rebels knew what they were in for. C3 is not a god, but the Rebels kinda use the Ewok’s belief in his divinity to get them to fight for them. That’s the part that bothers me.

It’s a good franchise, but it should have been finished, not sucked out of the finger, at some point could not watch the delirium that was happening on the screens.

In any case, you could develop into the past or toys in this universe, but take off what is now, sometimes it hurts me to look at it

Not having seen any of the StarWars franchise, I don’t understand anything in this thread.

Can someone fill me in?

Lightsabers. X Wing. Millennium Falcon. Mans best friend is a walking dog and he loves a princess. Good wins in the end.

That should do it.

Not having seen any of the StarWars franchise, I don’t understand anything in this thread.

Can someone fill me in?

Come on. You’re like the kid who doesn’t come to class all quarter and then asks to borrow my notes. Go do your homework.

I appreciate this guy’s view points on the entire franchise. 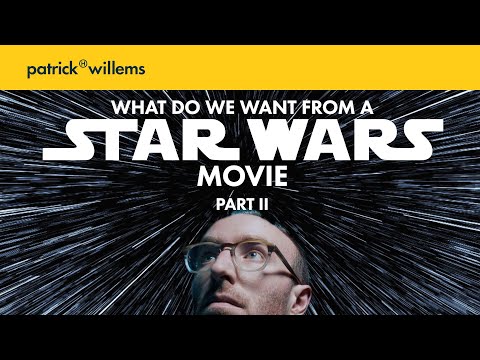