I’ve been anxiously awaiting the covers to come off of these two.

The S60: I’m warming to this new look for Volvo. The drippy melting front bumper is still not right for me, but the rear looks nice. The rear has a little Jaguar XF in it mixed with the strong hips of the Volvo DNA.

The A1: Big disappointment. I was expecting something far more dynamic to compete with the Mini and Alfa Romeo Mito. This A1 looks more pedestrian, more VW Polo. Having said that, I’m always glad to see two-tone cars. 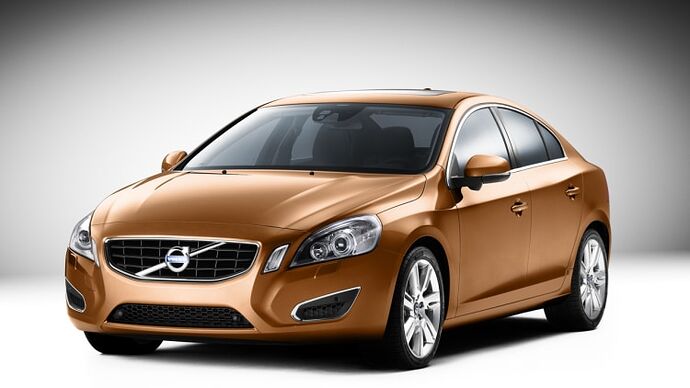 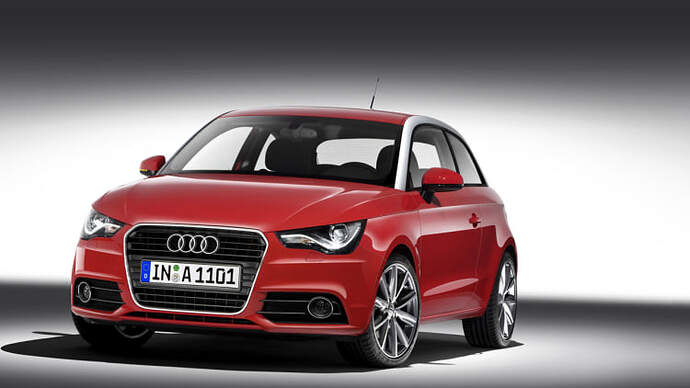 View detailed pictures that accompany our 2011 Audi A1 article with close-up photos of exterior and interior features. (24 photos) 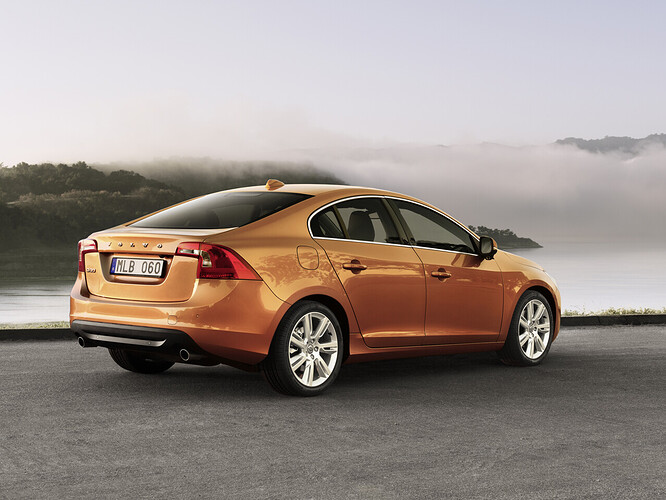 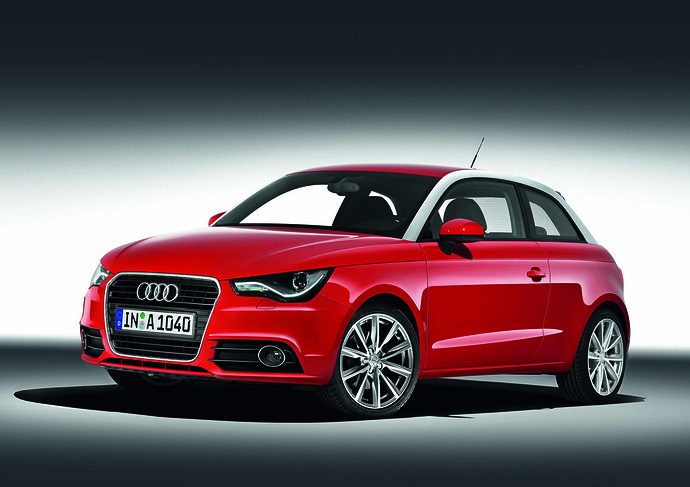 That volvo is actually pretty hot. Really like the way the back looks a bit prematurely cut off. Not too sure about the taillight overlap on to the trunk, to me it doesnt really flow that nicely. The sloping center consol behind the stick looks comfy!
Would really like to see it in another color.


I actually thought the A1 was a photoshop mash with the Fiat 500C… Cant say ive been to impressed with audis latest creations, the E-tron and now this.

I’m about as big of an Audi fanboy as they come, and I’m a bit disappointed in the A1. I enjoy the tone on tone, but it looks a bit mashed together. Something not quite right with it. It’s like the front of the A3/A4 got pasted onto a Golf, then the ripped the brushed luggage rack off of the Allroad, and made the roof line out of it. Bummer.

Hated the name, but still loved the e-tron. And I’m continually impressed with Audi’s at dusk, especially the R8. I saw one out in the snow the other day, beautiful…

I just don’t understand where Audi is going. The Bahaus influence that Jay Mays and Freeman Thomas brought to the brand seems to be gone… which is fine, everything changes with time, but now they are just another German near lux car maker… I think the A1 just looks like a mess. The badge grill has had it’s corners knocked off making it an odd trapezoid? The uber aggressive (in a conservative way) lower air intakes look tacked on. The signature headlamps are nice but get lost, then with a roof line that seems to harken back to the older Audi, but not cleanly.

I guess I’m just from the Avus school of Audis. Any Audi with a hint of this under the skin is just right to me. I think that is the DNA audi should be tapping. 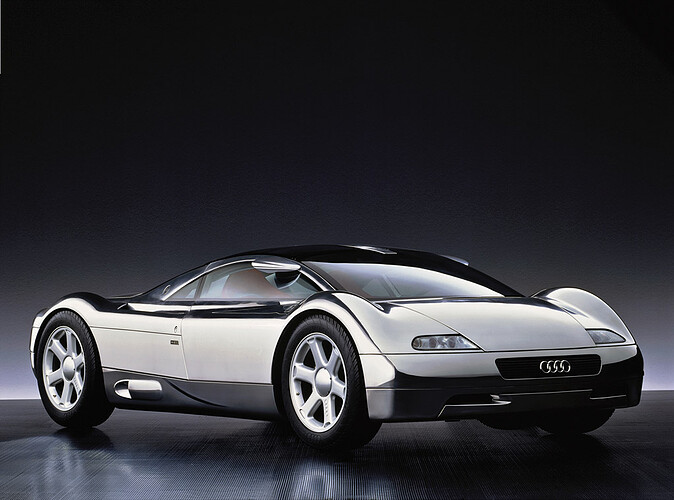 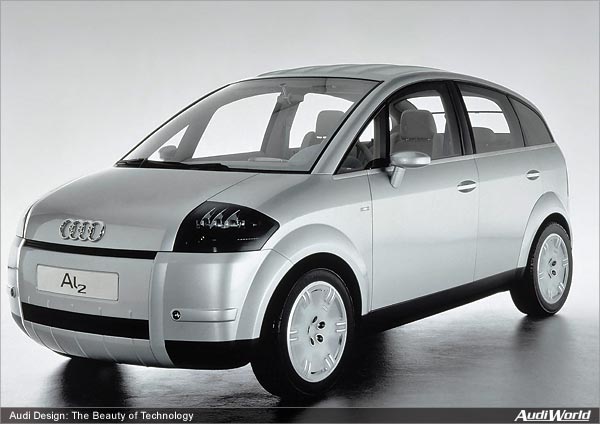 As for the Volvo? I think it would make an awesome Hyandai.

The volvo is just too much.

Maybe the Audi wil look better in person? It happens. I just wish they would sort out the front end. Big Grill+lower little gill vents below the grill + lower side intakes + detailed headlamps is a lot of stuff on the front of a little car.

man, im really disapointed with the front end on the volvo

, im usually a pretty big volvo supporter. I’ll give it time to grow on me but it just looks like a jakked up/uglier version of the Regal GS front end.

to me just looks like they went a little crazy with the molding of the fascia and too aggressive with the shapes of the various elements. is it just me?

Sorry Yo, but that A2 concept looks more like a Tata than Audi imho. I don’t like the A1 either, looks like to much of cut&paste and a way to aggressive front for such a tiny car.

I dunno, out of the the two, I’m kinda liking the Audi. The chamfered grill goes back to a previous concept vehicle (can’t remember which) and overall the proportions look good, plus the AL pillars are nice. No, it’s not the Bauhaus inspired stuff of (yo’s) TT, but that is already a bit dated with the like of the new BMW’s and A5’s and now out that show equal restraint with a bit more fluidity and emotion. I’m one for clean lines, but there is a certain 90’s Taurus vibe it can bring… I think this will be like the A5 or Z4, where in person it looks a lot better (side note- every-time I see a z4 on the road I can’t stop looking - I swear it has one of the most unique and aggressive/refined faces currently out there).

The Volvo on the other hand is a disaster. Rather than Hyundai, I think it is more like a Subaru (sorry Justin). Designed, yes, but wholly unremarkable and un-ownable from a “down the road” perspective or brand DNA vibe . I’ll always have a sweet spot for the brand as I grew up in A 240 GL, 240 wagon, 740, 850T, and have liked the previous gen wagons and some other models but this isn’t cutting it for me. the “between the lights and grill” lamps look like the weak E class MB face, and the tail looks like it was C&P from several marques (jag + Subu + Honda + ???) . Plus the sculpty side profile is certainly Hyundai.

out of the 2, I can certainly see the Audi doing well. The compact Audi sportback in Europe is already a big seller and there is not much in NA to compete aside from the plasticky Mini or fault prone VW (imports and others just don’t even stackup). Still (if it supposed to be) as a BMW 1 series fighter, the Audi has a long way to go, IMHO.

At the least, I’m glad Audi didn’t chase the MiTO, which is a cartoon on wheels.

Looking a bit more, I do like the front half of the Audi if I block out the back half, the front makes me want to see the rest. It’s the back half that bothers me. Almost reminds me of a Kia (which ever model it is that they said was “Mightier than the Mini”.) I don’t see the problem with the grille/headlights. I’ve come to expect crazy eyes from Audi as of late. And I like where they are going.

The Volvo is a bit odd, but I’m sort of neutral to it I guess. Its neither offensive, or beautiful in my eyes. I do see the Subaru vibe like RK mentioned.

This oddly sculpted grill surround leading from the headlamps thing seems like it might be a mini trend. For the record, I don’t like it, but this 2010 Mercedes-Benz F 800 Style Research Vehicle seems to pull it off a little better: 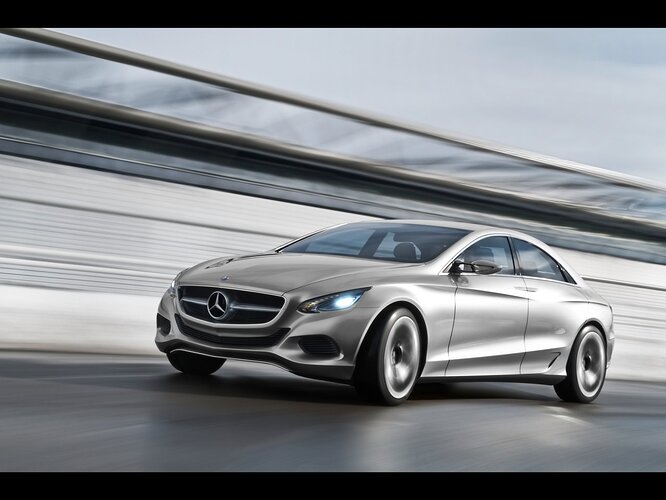 No concept, its production

Hated the name, but still loved the e-tron. And I’m continually impressed with Audi’s at dusk, especially the R8. I saw one out in the snow the other day, beautiful…[/quote]

That Mercedes is the best BMW I’ve seen!

That Mercedes is the best BMW I’ve seen!

The execution on that Mercedes isn’t too bad there. I don’t mind any of these but the Volvo. I wonder how much better cars in general would look if at least one set of fake vent holes had to be removed before they went on the market?

The DS3 makes me think of a pug puppy playfully growling at your hand.

Cameron: That should definitely be a new design rule.

Cameron: That should definitely be a new design rule.

The old “red dot” trick. I’ve done it. Also, the first round prototype should look “too finished”… leave a little room for “progress”