I don’t know if any of you get “The Daily Heller” from Print Magazine in your inbox. But today’s looked perfect for this site.

"Went to Barnes and Noble. They had a brand new spiffy area built up in the front of the store to sell Nooks. It looked as if they were attempting to clone the sales look of an Apple store. They had big posters of the Nook, and I saw a bunch of Nooks in the glass cabinet. I was curious–I asked to see one. But they didn’t have any. Instead, the salesgirl handed me a very cheap plastic model of the Nook. It felt as if they’d popped it out of a bubble-plastic template. She told me it was all they had, and that even she hadn’t seen a real one yet.

"There were six salespeople behind the counter waiting for curious consumers. They were going to take orders if they could. But all they could offer is a flimsy plastic dummy that doesn’t do anything. I just held it and stared at it. It may as well have been a photo on a flat sheet of paper.

“All that is to preface my delight as I said to the young salesperson, ‘Do I look like a Schnook? I’m not going to buy a Nook unless I can hold a real one.’”

On a related note. Is Nook (which is a little corner in a house, below), which rhymes with crook, hook, took, and zook, really as good a name as Kindle? 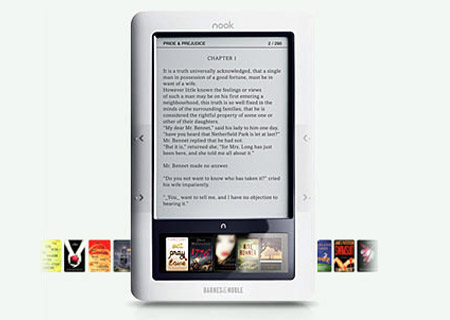 A plastic model? And you’re going to try and generate a buzz about this thing with it? Come on! Nice salesmanship there B&N.

I like Nook, too. I think it’s more inviting than Kindle. Kindle sounds like either a person, or kindling which you burn. Books and burning shouldn’t be lumped together.

Are Barnes & Noble being sued for the design of this ?

We don’t have B&N in the UK and the Kindle has only just come over, (though we’ve had quite a few Sony ones)…

why would they be? 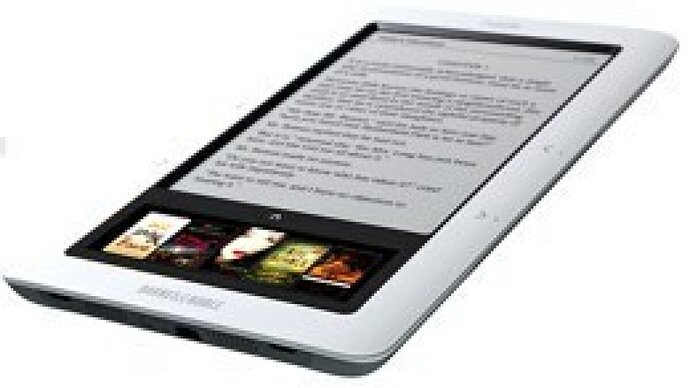 I guess I am a little slow. But I never even noticed the dual screen on the nook. At a quick glance I thought it was just a large single screen.

As far as naming goes. I like the name Nook over the Kindle. NURB bought up a good point with the name of the Kindle. Books + Burning = Not Good

I like Nook, too. I think it’s more inviting than Kindle. Kindle sounds like either a person, or kindling which you burn. Books and burning shouldn’t be lumped together.

Huh. I never really thought about the naming of Kindle in the sense of burning books. It actually makes some sense, figuratively speaking. Digital books taking over good old fashioned paper books.

We’ve all had this discussion before, I am not a believer that paper books will go the way of the Dodo, but Amazon and others in the industry woudn’t mind if they did.

Nurb: I thought the same thing when I first heard of the kindle, ie kindling. I prefer Nook. It sounds casual, friendly and warm. I think that’s the way you want to present a new technology.

As for the original article…shocking that a big company can screw up a simple product launch. I second Yo’s vote of manufacturing problems. They probably should have invested a little more to make sure the first hit was a home run.

I wonder if they even managed to sell anything? I like the idea of the electronic book but I quite like having a collection of books. Or is this just me?

The law suit is interesting, I wonder if it will hold any water. I predict an out of court settlement.

Nook is good because a reading nook is a quiet place were you, ah, read. I got the Kindle reference, burning physical books in favor of digital, but it is violent, has a lot of bad historical and literary connotations, and people love physical books as has been mentioned. Some cultures measure wealth by the size of the family library. There is more here than convenience… of course if you were collecting records in the 70’s you may have thought the same thing…

PS> book is good, but the movie is only OK…

I knew that reference was coming! The book is great. 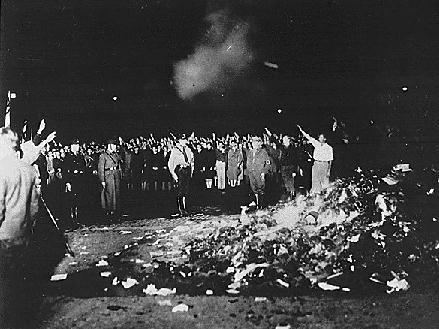 I thought that the Kindle name was supposed to refer to igniting a new idea. I don’t know how the marketers didn’t think about the Nazi parallel, but what is it that IP said about marketers?

I thought that the Kindle name was supposed to refer to igniting a new idea. I don’t know how the marketers didn’t think about the Nazi parallel, but what is it that IP said about marketers?

“From Voltaire: ‘The instruction we find in books is like fire. We fetch it from our neighbours, kindle it at home, communicate it to others and it becomes the property of all.’”

Thanks mgnt8. Now I feel bad for being a designer:/ I love the Tivo name though. You win some and miss some I suppose.

Well, now it’s out (or at least reviewable), and it doesn’t appear to be getting any better than the fake plastic version.

Every one of the Nook’s vaunted distinctions from Amazon’s Kindle comes fraught with disappointing footnotes.

So I was at a Barnes and Noble the other day and they had a Nook kiosk right in front of the doors, in sort of an In-Your-Face way… poked around a bit with it, not a whole lot of time (had a 2 year old on my leg that REALLY wanted to go home).

But as I was leaving, I over heard one employee say to another working in the kiosk “So, I rebooted this one here, so it should probably work better than the others for a while…” What? Really? Just seemed a bit strange to me to make a comment like that.