The Napkin Sketch in a Portfolio

So now that I have a few years under my belt and have worked on a few real world projects, with other designers I was thinking it good practice to make sure the old portfolio doesn’t stagnate and give it a facelift from the graduate/couple of internships state it currently is in.

I’ve worked on a few projects in small 5+ member consultancies that I wanted to showcase and was wondering how best to document and talk through what were pivotal moments in the design process.

These were the moments when myself, my creative director and other designers would have moments hovering over each others desk/at a communal table and quickly scratch out various evolutions of the project we were working on. These were where the finer details of the product were decided, nothing that would ever be shown to the client and all internal. It could have been drawn literally on a napkin, the back of a printout, over a render etc to really hash out what we were trying to get at.

By no means were these sketches anything sexy, however they were crucial in moving the project forward. It also highlights the sort of place I like working - where you can bounce ideas off your peers and gain fresh insight.

I’d like to showcase these moments but am still in the mindset of how I would have done a portfolio a year or two ago, does the pure fact that I can showcase hot skills in my old projects and have the experience of my resume mean that these things are ok and not always so polished?

I think you can show them in context of a flow of work, but obviously they are not stand alone images. If you have hot image, research, hot image, scratch sketches, hot image… you will be fine. Sandwich it in there

In agreement with Yo.

Its an important step in the development of the project so I would say its important to have in, but put in with other parts of the development process, pictures of rough prototypes etc etc.
But not as a money shot

I think there’s certainly a place for scratchy development sketch. Really that’s where a lot of good ideas start off and being able to quickly document and communicate ideas is a crucial part of designing.

I’d try doing some kind of collage of those sketches -maybe putting a bunch of them on your desk - if you want to include them and use them as a background for a concept development page in your portfolio.

I’d suggest using it as a story-telling device in your book no more than twice (if you have perhaps four or five projects total in the book). Any more than that and the layout/prezo gets predictable. Kind of like how M Night Shmalauyan executed the plot twist so well in The Sixth Sense but was flogging a dead horse by The Village.

Napkin sketches are awesome. They show how you really think. Anyone can do fancy renderings given enough time. And while they look great…enh. One of the best designers I ever worked with couldn’t draw his way out of a rectangular box.

nothing that would ever be shown to the client

Why? Clients love being including in the collaboration. I get that some design teams believe you can only show clients finished work, and…okay, whatever…but showing this work can help your team avoid a ton of wasted time and also optimize the level of fidelity of submitted work. If a napkin sketch or a callout will do the trick and get the client from point A to point B, no need to increase the fidelity. So show them, and show them without shame!

There is definitely a place for them, as long as they aren’t your sole images as Yo said also. I know designers that almost draw exclusively like this (very fast single-line contour drawings) but still come up with great subtleties in form.

If you overlay enough of them in a composition like this, it really works and don’t really see the roughness of the individual sketch. 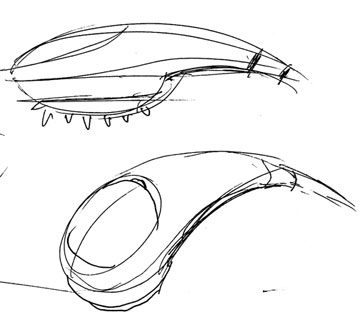 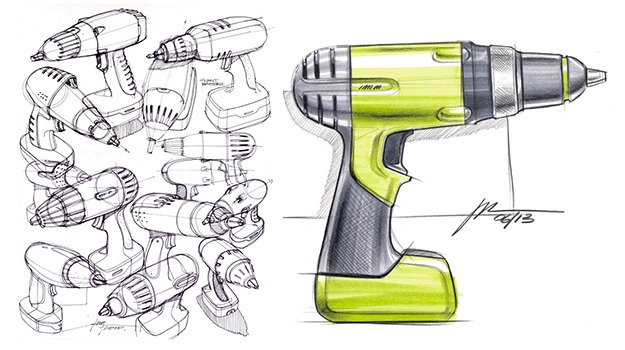 I love napkin sketches because they are so spontaneous and often much closer to an original idea than designer sketches. I love seeing how famous products evolved from a very simple sketch, take a look at Gehry’s sketches for example.