Maybe it is just because I wasn’t paying attention before, but it seems like there are more body doubles in Detroit than in Hollywood. Check these two: 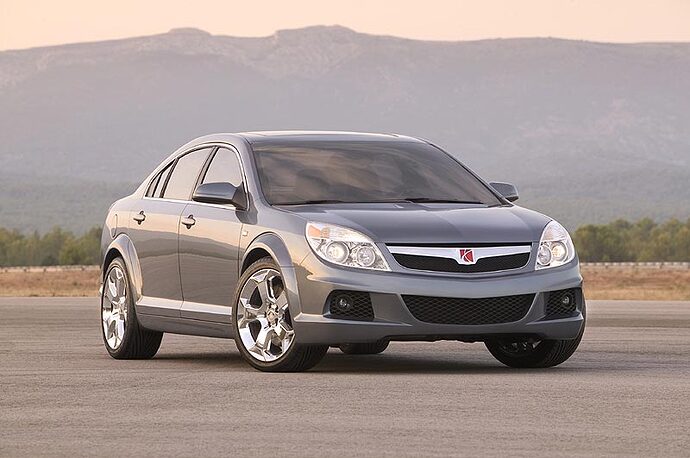 The disappoint here is that the General tried to give Saturn its own unique aesthetic since the begining. Sure, some models were less refined than we would like (weird shut lines, or following an out-dated trend) but they were unique. Remember that Saturn two door with it’s bold accent line cuting around the body? Remember the Ion’s funky roof line?

Sadly, the General has declared individuality at Saturn dead. No more plastic body panels, no more unique styling (for now).

This is the best looking Saturn since the origional. You are right though, too bad the origionality was sacraficed.

Look at this bad boy:

Unique form and detailing all in 1991

Yo, thanks for posting those originals. Today these things look a little dinky, but they were fresh in '91. I particularly like the wraparound rear window. That adds a very unique flair to the design. The detailing is very nice in the lower part of the car. There is a line that starts at the front, incorporates a side turn signal, then turns into a molding across the doors, finally it sweeps up into the rear bumper. Nice and simple.

totally tiny looking. It would be cool to give one of those designs a modern proportion. 90’s retro?

I have two points: