The devil is in the details - how does one envision them?

I have a difficult time detailing a sketch. Though I have minimal experience drawing vehicles, we can use them as an example for what I mean. When I draw a car, I can usually come up with a general form that I like. But when it comes down to the front grill, the position of fog lights, the styling of the rims, etc, I draw a blank. At best, I can copy what I remember from other cars.

For example, here is a very quick doodle I did the other day (Forgive the quality, it was snapped with a cellphone). 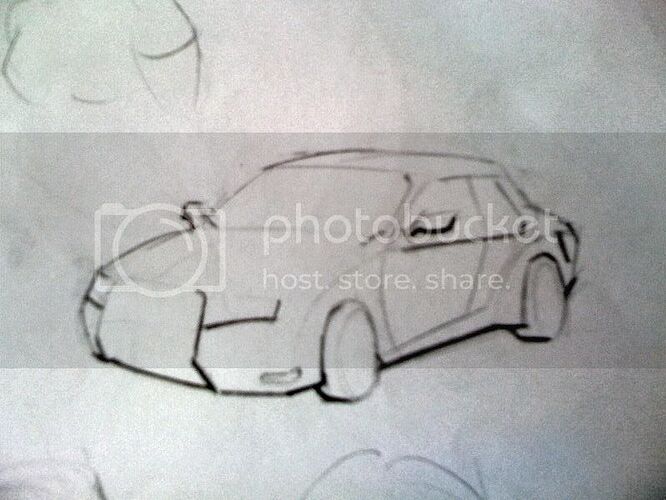 I’m not the strongest sketcher, so I was happy with it. But I couldn’t detail that front grill if I tried. I’d assume it’s because I don’t study cars enough to have anything to reference, but it troubles me to think that I’m SO incapable of envisioning a concept without such direct ‘inspiration’. It doesn’t feel like reference material to me. It doesn’t feel like inspiration. It feels like copying, because I have such a hard time going beyond what already exists.

Are there any tips, exercises, etc that you may recommend? I just can’t pin down anything I try to draw from my mind.

You don’t have enough design vocabulary. Looking at other vehicles / sketches is a good thing. You are learning what typs of details are out there. Only when you learn out there can you create new things. This is something I learned from concept artists. They have TONS of reference images from real life, and they take components from existing things and push it further to create their concept designs. After you’ve drawn TONS, then that vocabulary becomes part of you, and you won’t have to look at references at much.

I fill in the details or make a call out as needed. The Call out can be something like “alcantara” pointing to a strap or a seat that is just shaded in. Or you could do a call out with another sketch over to the side that in very zoomed in of whatever. It totally depends on what I want to express about the sketch.

Yeh I had problems doing the details until I absolutely had to - then I started looking at all the forms around me in everyday life and how I’d draw them, how they look in relation to other parts of a product etc. It’s just practice.

Yeah Tangerine pretty much nailed it. The reason you’re having a problem seems to be the lack of design vocabulary, which can really only be developed through constant practice.

If you work at it more and more you’ll become increasingly confident in your ability to ‘detail.’ You may also notice your sketching will improve (in addition to being better you’ll work a little faster). A good starting point may be to take a grill you like, and practice by copying it, then change a detail, then change another and another until you’re several deviations away from the original. At this point you should have a grill that looks like your own design, now get rid of the original and keep designing new grills off of your own design.

The ability to design is great because the vocabulary can be developed on the spot and in any direction, some will be better than others, but you’re only governed by your ability to try something new.