The creative kernel of design: Wasteland?

If you were to write a book or movie in highschool, which premise would you have used?

I was thinking of Patton Oswalt today and I started thinking about personalities that are drawn to design. He discusses in his recent book that creative high school kids that want to write something have to start by getting rid of society (because they have no experience in it yet). That means one of three plots: zombies, spaceships or wasteland.

Spaceship: We live society behind and head to space & discover adventures.

Wasteland: Some sort of environmental catastrohpe has destroyed society. Our hero has to navigate the remains.

Which would you have written?

Which would you have written?

Sounds like something from an MMPI test; 4Pd (psychopathic deviation), or possibly a dependency toward 7Pt (psychasthenia).

We are talking Patton Oswald, the comedian, right? I haven’t read the book (Zombie Spaceship Wasteland), but it would seem to be pretty hard to write anything “creative” about a society, of which, you know nothing.

I mean, how would you “know” , for example, that Zombies had not previously already killed everyone on the planet and that “we” weren’t actually Zombies our selves, etc. i.e. It wouldn’t be “new and bold” if the situation was already “real”. Which leads me to wonder how a young designer-wannbe could relate to users if s/he needed to “get rid of society.”

Why only three plots…? That’s kind of limiting for “creativity” doncha think?

Maybe I’m taking this too literally?

p.s. I would have written about flowers … . . (answer to an actual MMPI question)

The reason the three plots destroy society first is because this is what we would have written as teens. In other words, before we had girlfriends, wives, kids, bills to pay, been unemployed, had a boss, etc. Before we had the critical mass of social experience to write something about the real world.

When I first heard Oswalt describe this, I immediately thought that I would have written a wasteland kind of novel. I feel like a kind of Indiana Jones, always looking for forgotten objects or examining things that we take for granted.

I was thinking of this the other day while working on my car. People keep telling, “maybe it’s time to get a new car.” It’s not the cost, I just need to keep driving this one…it still has value to me.

The same thing goes for old electronics. I love turntable for that. I love tearing apart old computers.

As for spaceships, I don’t have time. I can’t imagine leaving this planet when there is so much that I don’t know about where I already am.

I picked Wasteland but having been a teenager in the 80’s I figure that makes sense.

Always Spaceships! You can use it to escape a wasteland full of zombies!!

Thinking of zombies…apparently these are hipster designer zombies (from the Core Blog): 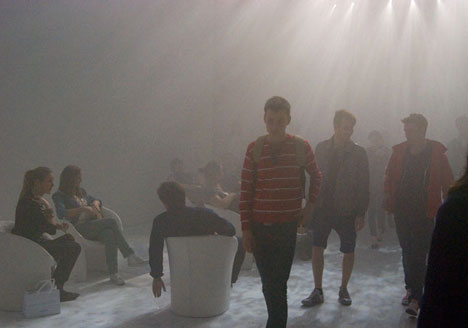 Spaceship full of zombies which emergency lands in a wasteland… just kidding, spaceship of course.