The Classroom Desk by IDEO & Steelcase 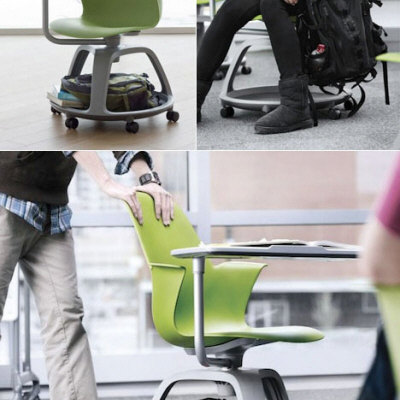 If you travel back in time and show a student from the 1950s an iPad or Twitter they'd have a tough time making sense of it; show them a classroom desk, though, and they'd see it's changed little.Steelcase's IDEO-designed Node chair aims to change...

I was just looking at the updated school desk/chair combo shown on core77 by ideo and steelcase and was a little surprised by their decisions. My first reaction was that it was good looking, and definitely a nice update. Then I started to think about the little monsters who will be using these. I can say little monster because I used to be one.

My biggest issues are the wheels and swivel. Take a look at the hunk of wood old desk they show as the “old desk”. That thing might be 50 years old, and you know what, it still works. But wheels break, or get gum and shoelaces stuck in them. Schools will not be able to afford to replace these every 5 or even 10 years. They also show them on carpet but most schools still use hard tile floors and can you imagine how loud those 120 or so (6 wheels per chair) plastic wheels will be in a classroom?

And I can see it now, desk races down the hallways and kids having spinning competitions while the teacher leaves the room.

You also will have trouble removing the graffiti of “Bobby hearts Jenny” that will inevitably be written onto the plastic. Those old wood desks could be sanded down and refinished at the end of the year.

IDEO/Steelcase made a nice looking chair, but I’m not sure it’s an improvement or the best solution.

if you read the FastCompany article it says that it’s only intended for private schools/universities with the monies/nice facilities.

Of course, it’s unlikely that the chair will be appearing in your local public school anytime soon–the market seems to be the glizty new secondary schools and new university classrooms popping into existence. And you wonder whether the economics will work out, since a plastic chair probably can’t last as long as bomb-proof metal job like you find in public schools.
Meaning this design, for now, will be one more reason to envy a private-school education.

Come on IDEO. That’s what all of your freethinking came up with? A chair with wheels and a spot to put your book bag? Every school these days has top end Steelcase, Herman Miller, Allsteel furniture because they get deep deep discounts. Everyone already uses office chairs in these “High End” settings.

I don’t care where you are, students are students. They WILL race them down hallways, even at Ivy League schools. Those casters will be broken in the first year because they aren’t metal. Plastic breaks, etc. Anyone out there large in size? I’m 6’5" and well over 200 lbs. Not fat (I don’t think) but me and school furniture don’t get along very well. And I’m certainly not some freak of nature either, there’s many of us out there and we break stuff easily.

I’d definitely roll these down the hallway. All nighter hallway races are the best.

I’d definitely roll these down the hallway. All nighter hallway races are the best.

Oops, I wrote IDEA instead of IDEO. I’ll probably be blacklisted for writing this post and will never be able to work for them.

I don’t buy that these will be treated better and last longer in college or private school settings. Kids are kids, and guys are guys so they will break. This sort of falls into the the “if it ain’t broke don’t fix it” category to me. School chairs should be uncomfortable and last forever. That what they are now.

That’s what mine looked like. Already had a plastic back. What I never liked was the small under-seat storage. I prefer the more open and large solution of the Steelcase desk. However, a wire mesh would be better (less dust collecting).

It looks great too.

Mr-914, I had the same desks in highschool. The first thing I thought when I saw the design was: I hope that storage bin has a large drain hole!

In regard to the casters, I wonder if a glider type foot (low-friction plastic) would be a better option. Easy to move around, yet you can’t race them (and “bomb-proof”)

EDIT: I just looked at the brochure, and the bottom is perf pattern, and they have a glide option. So , ya, trying to not be cynical… 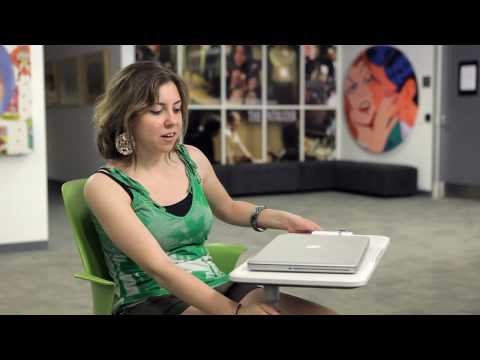 I’m confused. That video is a spoof, right?

The design is pretty incremental on paper, but it looks so modern that it instantly makes the classroom seem more progressive.
I’d like to see an entire classroom system designed around this. Interactive movable whiteboards, teachers lectern etc.

I am a little unimpressed. First thing that strikes me as completely obvious (even more so when watching the video), is that this desk seems to stick too much to the past and not accommodate all those “connected” experiences that are mentioned.

EDIT- just saw in the video someone mentions have a laptop and paper on the desk at the same time. However, funnily enough, the photo doesn’t look like it is possible!

BTW I should add I have a 1960s Herman Miller Action Office Desk here that has the same concept - a built in cord with an extension cord in the desk. Never used it, but a great idea!

Overall, to me I am surprised at this, esp. since it is coming from IDEO. I would think given their process of research more of the obvious things I mentioned above (only giving it 2 min thought a a quick look at half the video) would have come out. Am I missing something here? It’s not obviously the cheapest solution, and certainly not the best…

If I have time, I’ll sketch out my solution. (or perhaps a perfect 1HDC?)

I loved this video. It started off the way all infomercials start with the black and white pictures and people struggling to learn because of their wooden desk. It’s a wonder anyone of us have made it to this point by the looks of the video.

I would like one of these for home though, it’s the perfect tv dinner tray chair setup.

I found this pictures of 4 classic styles. I like A04 because I can put my foot on that little bar and enter from the left or right. 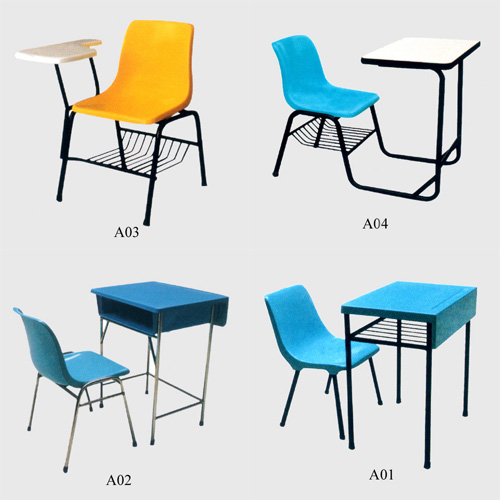 I would like one of these for home though, it’s the perfect tv dinner tray chair setup.

My thoughts exactly, I could roll myself from the office to the kitchen to the living room, maybe even the bathroom if I get creative, “Hey Steve, hold on, I’m switching Skype to audio only, let’s talk about that Orc animation sequence, okay? What sound? Oh, nevermind that…”

The first thing that popped in my head when I saw the picture on the blog was “would an obese person fit in there?”. It looks pretty narrow, snugly fitting a normal-ish person as the people in the video, but start getting a little large, and you’ll be hanging out all over the place.
I like the swiveling arm, and I also think this desk was not designed for universal classrooms; it seems it was specifically designed for collaborative learning sessions of somewhat mature adults, not kids.

Really? I mean, really? “I love the fact that we can arrange them in a circle…” This is not a design achievement, its a marketing achievement. this chair is an Ikea piece of crap that will be too expensive, each unit has 6 opportunities (wheels) to malfunction, and the fact that they have to brag about the chair’s ability to swivel is, well, pathetic. Enough already.

celticdog: in the video, they show it being used in a arty-graphic school. Obviously, it is designed for anorexic thin urban hipsters.

cg: thanks for the video post. It does add some more context.

rk: great comments. I’m getting some ideas just from the problems you suggested.

Now this has the wow factor. 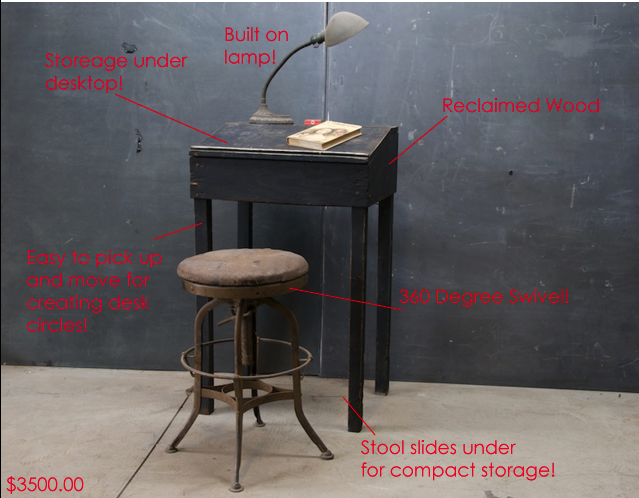 I don’t see how this is a bad product. They focused on one key attribute: modularity, which is a good one to focus on for school stuff. Different seating arrangements can make all the difference for a specific learning activity.

Adding connectivity and power-based stuff would only make it sillier, and be a bigger waste of money for technology-obsessed education bureaucrats.