So I have to wait until I can make it out to Detroit next weekend to see the car in person, but jalopnik had press photos up…and I have to say, I’m a little underwhelmed

I feel like they’ve been onto something lately, with the ciel concept, and the cts-v’s, but it just didn’t boil down to the ATS. Though I do have high hopes for its new platform, it’s supposed to be in range of the 3 series speeds.

Am I alone in thinking that this:

isn’t up to this:

NOTE: I reserve the right to totally take back my comments after seeing the car in person

I kinda like it. But it doesn`t have that sporty yet refined look of the 3 series though.
Looks more like a direct rival to the MB C-class and maybe Lexus.

I like how the CTS looks, but this isn’t a hit based on the pics… Jalopnik mention a manual, 2.0T, and wagon. All three at once would be awfully nice (for me and about three other people).

maybe my hopes were just so high after I filled in the blanks of this photo:

@Coffee87 maybe that’s it, they keep saying its targeted towards the 3 series, but lacks the sportiness, however if they said this was going after a lexus is250 I might view it a little differently…

A solid triple, but maybe not a home run, in my view. It is super clean and tidy, I have a feeling the proportions will be nice in person. Other than the trailing headlamp, not a lot of risks, but maybe that is OK.

The tail looks a little tall and narrow in the photo anyway. An effect of the nicely tapered top view combined with the tall tail lamps and not a lot of horizontal elements. Most sedans this size and smaller have a lot of horizontal surfaces to break up the tall trunk lid, and their tail lamps wrap deep into the side view, all to give the impression of width. The Caddy design language doesn’t allow for that, so the back end ends up looking a bit tall I think. It works on the bigger CTS.

I need to see it in person.

With the Germans getting all expressive (even the surfacing on Audi and M-B is getting out of hand!) maybe it is appropriate that the Americans zig and get more restrained? 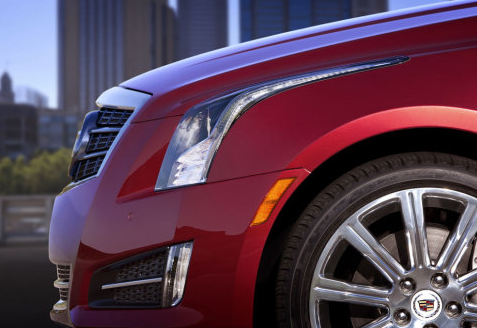 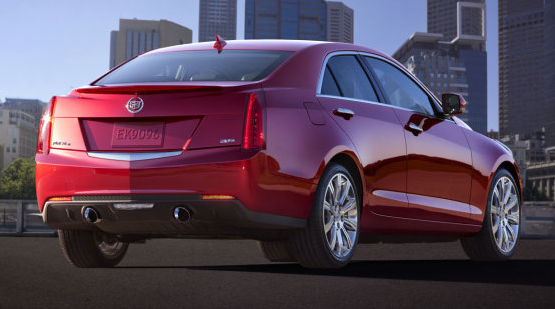 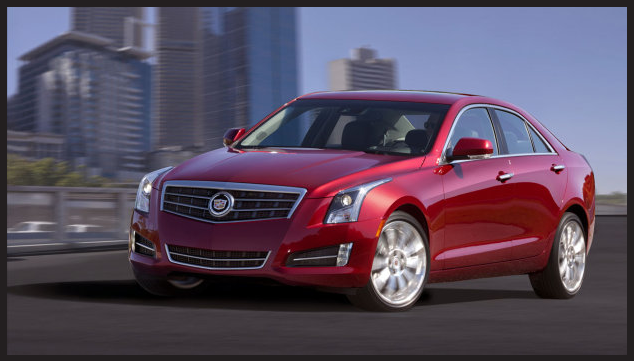 Digging the Front 3/4 view, Loving the headlamps (especially from the side…), Hating the side view.

And thanks for pointing out the vertical tail lamp vs. horizontal, Michael. Now I know why I don’t like the rear at all.

What I really DO like about it is it reminds me a bit of the original Lexus 300 IS which I always loved. I would drive that today. 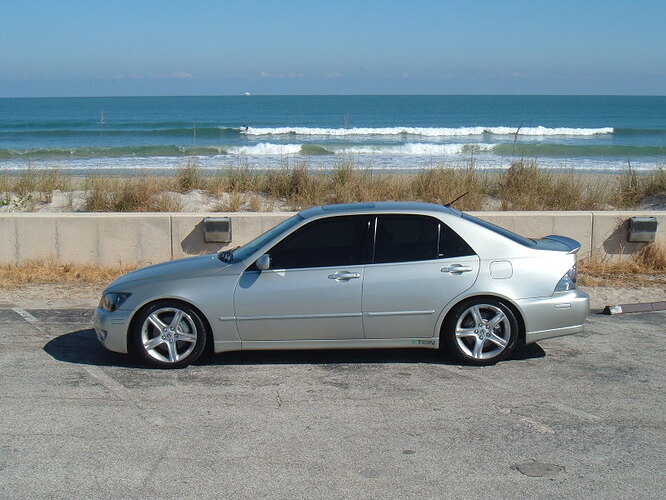 Also, the caddie might look better if it was lowered on a tein suspension setup

At least put up a fair comparison pic:

What? Against the 3er it’s a pretty big design gap I’d say. The bimmer is much more refined. The caddy looks closer to a Camry or something. Kinda forgettable IMHO. Not bad but not great. Pretty GM.

OK, I’m seeing some live images from the Detroit pre show from a friend of mine who is a designer at GM… it looks pretty good guys.

Agreed, the front end in this photo looks a lot better than the renderings above

Also, I gotta say, I’m not feeling the new 3 series. The headlight composition mixed with the bumper composition is very fussy and busy. The side looks like the old car. The back is not as cool as the last one. There isn’t really a small performance sedan I’m liking right now. I think the G35 got worse, Acura messed up the TL awhile back, the A4 lost it’s simplicity, the Lexus IS is not bad, but I don’t think I could drive a Lexus… I guess I’d go AMG Merc C Class.

Looks better. Agreed. Kinda Mercedes c class in a way. Still though the c is no where near the new 3. Compared to the outgoing model in some ways I’d admit nicer though the BMW interior was far better. Definitely have to see the caddy in person to make final call. One thing I’d expect is like most us cars it is 20% to big in all ways. Actually reminds me a bit of the 300c and not in a good way.

All that being said I don’t think I’ve been in a us car aside from a taxi in 10 years. I’ve only ever driven a rental once or twice and while lower end cars they weren’t great.

I too thought that the new 3 series looked more like a facelift than a totally new model. Going slightly off topic here but I couldnt resist posting a pic of my favourite recent release from Audi - the A5 sportback. Full seating capacity, 4 doors and and a welcome return to the lovely logic of the big, practical hatchback. Bmw have also released a similar sized 5 series hatchback , but I think it looks awkward when compared to the audi. 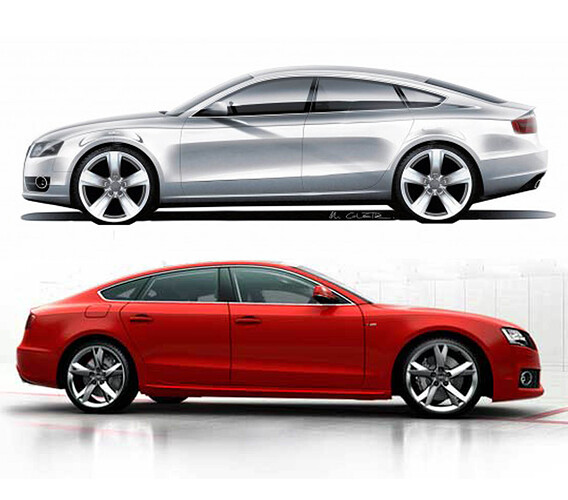 I like it and I think it’s a good design. It seems to have moved on from the CTS. The surfacing feels a little more fluid.

I like the high rear end too. I liked the effect of more vertical tail lamps on the Ford Fusion, '90’s Honda Prelude, Lexus IS and the CTS. Certainly, it gives it character.

The new 3, as a design, is disappointing. Yeah, it’s very refined, but that’s about it. I think if BMW doesn’t try to innovate a little with their design, they will be losing share to those that do in a few years.

I wad high hopes for this car… perhaps my next purchase?? (3 years from now buying used of course

) i will be going to see it in person on friday, but kind of underwhelmed from the photos.

I love the Merc C class, so i was hoping for good ol GM to knock that car off my pedestal but dont think this does it, not enough dimension in the side view for me, im guessing the ats-v will solve this with a wider track and different fenders and tweak to the fascia, hopefully. but def have to hold out judgement until i see it in person.

Yo, i also agree with you on the lexus, that car looks great, and dont forget the sportcross wagon or whatever it was called.

Not loving it. The arched up waistline (?) sort of hurts it - seems like a generic Euro lux detail. I think they would have been better served to further accentuate the hard edges, keep those key lines a little more rigid. The ATS is dangerously close to losing some of the angular dynamism at play on the CTS coupe in particular. Although it is obviously of the same cloth as the Ciel, the extra scale of the Ciel makes it such that those soft curves read as straighter lines. On a smaller canvas the curves read more prominently as curves. As far as refinement level, I think it’s pretty top notch. When I see the BMW in earlier posts, I see a car wearing a lot of jewelry and a lot of unneeded bulges that don’t have an obvious reason for being - but that isn’t refinement, it’s just Rococo. The lack of those characteristics is a real Cadillac strength. Downside for the future is I can see this language being morphed into something a little softer, bulgier, and thus more generic luxury car and less Cadillac.

When I see the BMW in earlier posts, I see a car wearing a lot of jewelry and a lot of unneeded bulges that don’t have an obvious reason for being - but that isn’t refinement, it’s just Rococo. The lack of those characteristics is a real Cadillac strength

Remarcable observation! It’s true, but most people over here would utter the opposite, having the
pictures of 80ies Caddies and 80ies Bimmers in mind.

Seeking reduced elegance in a Caddilac soundy like an oxymoron, but perhaps it isn’t anymore.

What I really DO like about it is it reminds me a bit of the original Lexus 300 IS which I always loved. I would drive that today.

Altezza’s are one of my favorite cars back in the day too.