Anyone remember this movie (1987 with some 90s sequels)? I saw it again for the first time in years and was amazed how relevant it is to ID.

Without spoiling too much, the appliances are sad that they are locked up in a summer home where their master (a kid at the time) has left years ago to go to college. They escape and find his new apartment in the scary city that is filled with newer, better, digital appliances that consider them obsolete and force them to the junkyard … of course, it is the old appliances that have the all the charm. Quite dark for Disney too, at least compared to later movies. 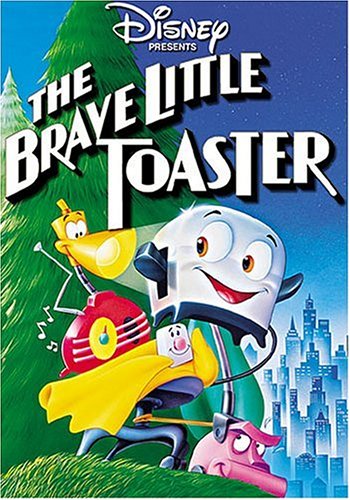 It’s the Disney movie that a lot of Pixar guys worked at before setting up Pixar. I think they didn’t have a great experience and some were fired, so when Disney bought Pixar 10-15 years later there was a lot of schadenfreude that Disney were now paying top dollar for them.

Thanks for the info, kind of sad to hear. Seems odd that Disney distributed the sequels a whole 10 years after the original too, and direct to video also.

“Later, he and Glen Keane talked about how great it would be to make an animated feature where the background was computer animated, and then showed Keane the book The Brave Little Toaster by Thomas Disch, which he thought would be a good candidate for the film. Keane agreed, but first they decided to do a short test film to see how it worked out, and chose Where the Wild Things Are, a decision based on the fact that Disney had considered producing a feature based on the works of Maurice Sendak. Satisfied with the result, Lasseter, Keane and Thomas L. Wilhite went on with the project, especially Lasseter who dedicated himself to it, while Keane eventually went on to work with The Great Mouse Detective.[14]
Lasseter and his colleagues unknowingly stepped on some of their direct superiors’ toes by circumventing them in their enthusiasm to get the project into motion. During a pitch meeting for the film to two of them, animation administrator Ed Hansen, and head of Disney studios, Ron W. Miller, the project was cancelled, due to lack of perceived cost benefits for the mix of traditional and computer animation.[15] A few minutes after the meeting, Lasseter was summoned by Hansen to his office, where he was told that his employment in the Walt Disney Studios had been terminated. The Brave Little Toaster would later become a 2D animated feature film directed by one of Lasseter’s friends, Jerry Rees, and some of the staff of Pixar would be involved in the film alongside Lasseter.”


Let this be a lesson to those at the lower rungs of an organisation:

Never ever have passion to pursue a project that pisses off your one-up’s, they will only fire you, setting off a chain of events that will lead you to create and be involved in possibly the greatest and most successful enterprise in your chosen field.

This movie’s got me fascinated:

and I found a reddit ama with the director Jerry Rees:

for example, designs of the appliances:

“The Kirby 500 series is very close to our Vacuum. Toaster was pretty much a simplified Sunbeam. Radio was like a distillation of lots of bakelite radios into one. I remember there was some discussion among the producers about putting eyes and a mouth on Radio. I pointed out that since he was a clock-radio, he already had a face. And his speaker, is his mouth. Glad they let go of the literal face idea. Blanky’s feel - not his model really - was like an insecurity blanket, because he was without his child to cuddle. Lampy was just a good ol’ bendy-neck. Thought he was bright, but he could be pretty dim sometimes.
Re the junkyard. It’s interesting that we were able to deal with mortality in a way that totally made sense (because cars really do get crushed there) but also went to extremes we could never have gotten away with if we’d used anything but inanimate objects”

Looks like I know what im going to be doing today: Revisiting my childhood! i used to love that movie when I was roughly 4. I could never stand that damn blanket though…

I never would have thought about all the politics and ‘behind the scenes’ elements involved in what seemed to be such a simple film.

Imagine if your appliance had a John Levitz Siri voice…