The back of the 2016 Prius: What Were They Thinking?

I apologize in advance if you own one.

Who is in the same camp if you think the back (and maybe the front) of the 2016 Prius is over done and uncharacteristically aggressive in terms of design?

When the tail lights are on in the night does it not look like some kind of disco tech lights you see at a club or something?

It looks like you took photos of the back ends of three different cars and overlapped each on multiply layers in photoshop. 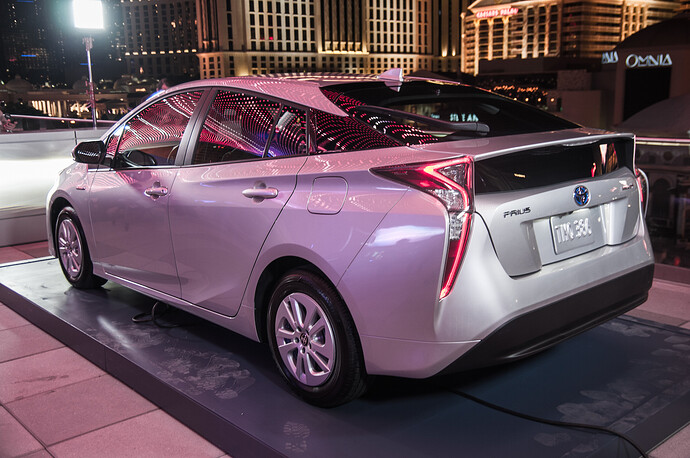 I think Toyota just wants to bring as much shame on the people who buy Priuses just to get in the HOV lane.

On the positive side, the front door is OK. Also, if that rear window is concave, I have to give some props.

I don’t own a car, but I spend an insane amount of time (mostly walking my bike) contemplating car shapes and recently sketching them. I am also fascinated by how shapes evolve over time, like for instance, why did round nose cars became the 90’s automotive face, how the angular boxy ones the 80’s etc,etc, I am sure there is a structured theory about it somewhere, I guess it starts with F1 or racing advances and slowly trickles down to the economy class ( sometimes devoid of the original functionality) , manufacturing techniques and other cultural trends among other factors.

In any case I believe we are at or entering the peak of the angular faceted body.

There is an amazing write up/ observation on Jalopnik on a related topic :

We Need A Name For Whatever This Is

I contemplate these thoughts as well.

I think a small part of it may be that design is intertwined with culture, and right now a lot of today’s mainstream culture isn’t about quality or substance, but rather standing out and being noticed… reality TV, our politicians, music, etc. today all follows this trend. People buy things that stand out, whether they look good or not. Toyota (and other manufacturers), in particular are all looking on how to make their cars look different and doing so in different ways.

Saw one of these on the street the other day as I was running by myself. I literally said “WTF” out loud. Geez. I don’t think there is 1 square foot of that car or viewing angle that isn’t a mess.

Correct me if I’m wrong but I think Simon Cox started the angular design in cars as he designed the Cadillac Cien (2002) series 15+ years ago around the time of their 100th anniversary. That might have sparked the trend. I see it a lot now in Lexus.

I don’t think this has anything to do with trend toward angular cars. The Cien is angular, it is also understated and tasteful. It is an incredibly well executed design.

Neither this nor the Lexus design language are particularly angular. In fact their are swoops and curves criss crossing and going in every direction. I think this has to do with an emphasis on novelty over beauty. Short term shock value over a lasting design. It reflects the larger product shift from cars that were meant to last to cars that last as long as a lease. The last time we saw this decadence in form was the advent of engineered obsolescence in the 50s. Gobs of decorative surface that had little to do with anything other than attracting the eye. I’m not an enemy of decoration, but it has to be handled tastefully and with skill to create a holistic design. The opposite is what is shown here, a fragmented mess, a pastiche of ideas.

I agree now its more of a swoopy curvy aesthetic on the Prius and even Lexus.

I think when they designed the Prius they were trying to do what they did with the current design language of the big brother Lexus brand but got carried away.

What I like about this is you have to get to this most ridiculous caricature of a design element, before something will arrive that completely changes the landscape.

I like to think of this design as the Hair Bands of the 80’s, and I’m just waiting for grunge to come along!

I’m guessing that they had dozens of cleaner, more-resolved designs but someone higher up in the food chain chose this direction, and the team was stuck with it! I sympathize with the designers if this is the case.