Texturing A Phone With Graphics?

I’ve been given a CAD file of a phone case and pre-made graphics. I need to texture the case and produce an animation of it. I was going to convert the file to polys, unwrap it, then texture but I was wondering if this could be done in NURBS.

Can a texture like this be cleanly applied in NURBS without distortion? If so, how? I can use Rhino. The graphics cover the whole of the case and extend around to the sides, just like in the image below. 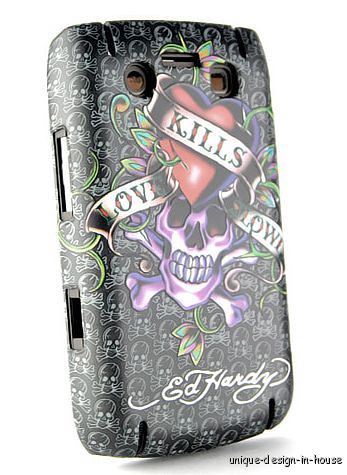 It depends on the renderer you are going to be using on how to get the graphics onto the object. It doesn’t matter if it is mesh or Nurbs.

I use Flamingo NxT with Rhino and get good results.

With a cylindrical, or spherical mapping you can get wrapping around any object. Decal placement of specific graphic areas on the flat back will make things precise.

Hi nxakt. Are you sure about cylindrical or spherical mapping? If I apply cylindrical mapping I get distortion of the graphics on the very top and bottom of the phone, as I’d expect. Spherical wasn’t working for me neither. I don’t have much experience with Nurbs mapping so a similar tutorial would be useful to see, if anyone knows of one.

Btw the attached image is just an example. I need to do this for various designs, all of which the graphics will wrap right around the whole case.

Isn’t there a way to make the graphic a “decal” texture map in Rhino…? one that is roughly the same size of the flattened layout of the surface you want to have the texture and flow over the surface. (maybe plus 10% of the total surface size even so a bit hangs off edges and you don’t see the border) When I’ve done it (years ago in alias maybe?), the surfaces have to be joined so the texture flows over both unbroken

The “decal” usually lies flat and undistorted, similar to an actual sticker on a physical model. (could pinch in on the corners though)

I didn’t know of one. I’ll look into it.

Is using an animation tool an option for this one? For that shape with the generous rounds you’d probably have a much easier time just doing it as an unwrapped model than trying to simulate it with projections.

You could do a projection for each side and then manually try to compensate, but you’re inevitably going to get some distortion unless you compensate for it in your artwork itself. Even then because the pattern is so dense (If thats the actual pattern) that it will be tough.

In Max or Maya this would be an easy unwrap, easy texture and easy to animate. I would say thats probably the best route to go, youd spend a lot of time messing around otherwise. A speherical/cylindrical wont get you what you want on a 5 sided object like this.

Is using an animation tool an option for this one?

Not sure quite what you mean? I’ll take it into Max to do the animating. Yeah, I figured unwrapping it would be the best option. Was just enquiring as the geometry’s not nice to unwrap.

Btw, any opinion on the method Travisimo suggested for this?

Not 100% sure what he means. I know Rhino has an Unwrap feature that will try to make flat 2D geometry out of your surface, but if you are bringing this into Max then it should be easy.

You should be able to unwrap the polys pretty easily and relax the corners so that they match up pretty well. If you can arrange the gaps in the polys on the solid areas of the pattern that should help as well. It’s a little harder but should be pretty manageable (if you compare to people who have to model heads and stuff, thats as easy as an unwrap job will get)

One of the real world tricks is to distort the 2D graphics to unwind the distortion on the object. Bike helmets are thermoformed graphics over complex shapes, these distort the PC sheet as it moves over the surface. So what is done is a few first tests using a grid printed on plastic and estimating the distortion. The 2D graphic is then pulled around, Photoshop is good for this, and the result is that the graphic appears to be normal when vacuum thermoformed over the mold.

Pad printing, the same issue, distortion in the 2D graphic exists to make it look right on the final 3D product.

In the rendering the same thing can be attempted, render a few views, figure out where the graphic is compressed, and stretch out the 2D graphic to compensate. Re-render and check the results, is not impossible to get a good result.

When using spherical or cylindrical mapping, don’t place the object in the middle of the sphere, place it out toward the perimeter of a larger diameter to minimize the effect. ( NxT does not have spherical mapping turned on yet.)

Depending on the printing process for the cell phone, there is likely going to be some distortion as well, how they compensate for this is likely to be similar to the mapping for rendering.

Unwrapping tools might be the answer, I don’t use those tools though, so I will defer to those that do.

So what is done is a few first tests using a grid printed on plastic and estimating the distortion. The 2D graphic is then pulled around

Interesting, I was wondering how this was done.

You should be able to unwrap the polys pretty easily and relax the corners so that they match up pretty well.

I thought so too. Problem is, when converting to polys (at a good resolution), the geometry is dense and messed up that sorting the unwrap out has been a big job. Stitching together hasn’t been easy + relax hasn’t been working cleanly. The only solution I know of is to go in and totally clean up the gometry or to remodel in polys. Deforming the 2d graphic isn’t an option because it needs to be changed out for other graphics later on.

This is advanced experimental technique. Successful distortions can be saved and mapped onto the new graphic in one step.

That could be very useful. Thanks nxakt

Sorry, I think I was thinking of a UV map with an alpha channel… It’d have the same problems as the other methods, as it would need to map as a planar, cylindrical, or spherical map too

I was thinking too of transparent decals and 90 degree cylindrical mapping, laying the graphics in sections over a base color, but it really is highly dependent on the graphics, continuous patterns are always going to distort somewhere in reality. There are not any speedy solutions for undistorted graphics, just like when you go to print on something. We need Aqua dip mapping for models…

I’ve been working with a firm that does a lot of tetrapack packaging, and they have this machine to transfer printouts to a shrink-wrap acetate material. You get a sheet of this printed acetate, attach it to a target package size, then hit it with a heat gun and it shrinks down to smoothly/tightly fit the surface.

anyway, a big part is pre-distorting the graphics so it shrinks down to the different shapes, it’s not distorted. Kind of a real world analogy…