I took some time over a few days to try to imagine what the quintessential Tesla compact car would be, and I thought I’d share the result and see if anyone else has taken on this design brief. It will be interesting to look back in 2023 hypothetically and see if this was a close match or very distant. 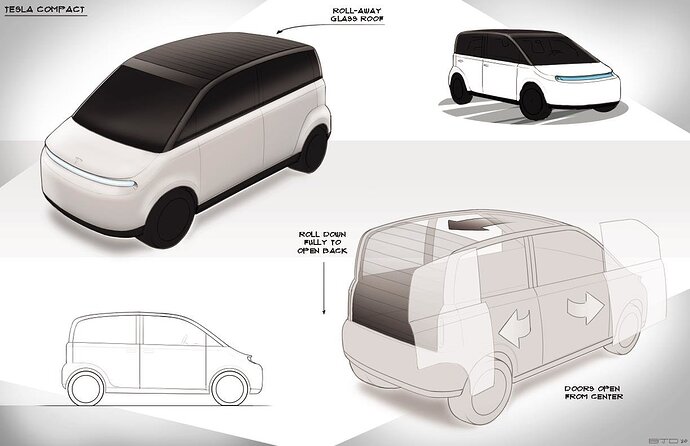 Hi Bradly, can you give us a little more context? What makes this Tesla vs a new Audi A2 for example?

If you just want to open the trunk and not the roof do the panels roll up as well?

So this article outlines the target I am trying to hit here: Tesla Officially Asks Designers To Create "China-Style" EV | Carscoops
Tesla is planning to create an inexpensive compact EV in China for China. This is ostensibly the $25,000 car Elon spoke about on battery day.

I’m not sure if the whole roll-away roof idea could be made this affordable but perhaps. Part of the inspiration is this quote from Elon: “something kinda radical, like Cybertruck, nobody was expecting that." The headlight bar and clean surfaces are nods to the cybertruck (also the roll-up cover). I do not think the long-flowing-line design language of the tesla models we are used to seeing will work well for a compact so I have not adopted any of that here. A city car for the masses should not look as aggressive as the cyber truck, so the angular edges are smoothed away, but the box-y-ness remains to maximize available volume. Not sure if this could be done as an exoskeleton like the cybertruck or not.

I asked myself the same question about how best to open the trunk/hatch. Having to wait for the roof to roll backwards completely just to put your groceries in could get annoying. Rain is also an issue. Rolling it forward seemed too unrealistic. Maybe it could do a quick 180’ and fold in half over the driver’s head. The side doors opening away from the center was my attempt at a solution, though I admit it was an afterthought (maybe it’s pillarless?). This may be preferable in a city- having two hatch-like doors on the street side of the car as opposed to one on the back side, where street parallel parking and loading is considered. This also makes the car open up even more which is a fine idea for a compact I think.

Theres been lots of electro-city design concepts done, not sure if you want any direct feedback, but some things I’d consider:

-The front headlight graphic feels very Lucid/Faraday Future, but doesn’t tie in much with anything Tesla.
-You are focusing a lot on the entry points, and mention you are thinking this is a more city focused vehicle - what does this offer as an advantage to urbanites? On the Cyber truck they were trying to get around the clumsiness of the typical tonneau cover, which either needs to be down limiting space, or stuck in the air (terribly inefficient) or off the car entirely (pain in the ass). But in this case why would a hatch or split folding tailgate not meet those needs? I also believe on the Cybertruck that bed only covers the exterior cargo area, a much bigger issue when you’re trying to address leaks into a passenger space.
-The minivan sliding door works because there is a track for it to slide past, in this picture, there is no path front or rear for the door to attach to - when it’s extended what holds it onto the car? The I3 does a really bad job at innovating doors for example just to be “unique” - but the rear passenger can’t open their door without the front being open, and opening the front from the back is almost impossible.

I would also think about the overall proportions of the design. Styling elements aside, the proportions in your sketch feel minivan, not city car - pay attention to the # of wheels that separate the front and back wheel. Check out the VW ID electric concepts for some inspiration and see how the scale differences in the wheelbase between their city car vs microbus concepts.

thanks, yes all kinds of feedback are welcome. I may come back and try to improve this, so far I only tried to get the ideas on the page and take a look at it. I spent the most time working on the proportions and trying to get the different views to match, I used reference but then strayed pretty far. I think the minivan look is coming through in the side view most of all and is because the car/greenhouse is overly tall. This was my intention, thinking that more usable space and visibility with more light coming in makes for a better design, but it is definitely fighting against sleekness and convention.
The I3 door is interesting in that it is pillarless. My thinking was that Tesla would potentially be capable of engineering some new kind of double hinge that rotates the doors out and away from center, though I did not do anything to make this clear. Also left unexplained is my idea for the interior to be as open as possible with repositionable seating to make the vehicle more flexible as a taxi/office/entertainment room once more advanced self-driving is ready (supposing that ever becomes the case). In this scenario the roomy side entry helps with loading and unloading and hopefully eliminates the need to roll the top all of the way back just to access the back.
This was just an exercise for fun so I don’t know if I’ll try to take it any further. I’m curious to know what other people think this model will be like. Very basic to hit the price point or full of novel features? Similar to the S,3 and Y or totally divergent?