This is a big week for Tesla. A lot is riding on what happens tomorrow. They gave a glimpse of their future in their IPO 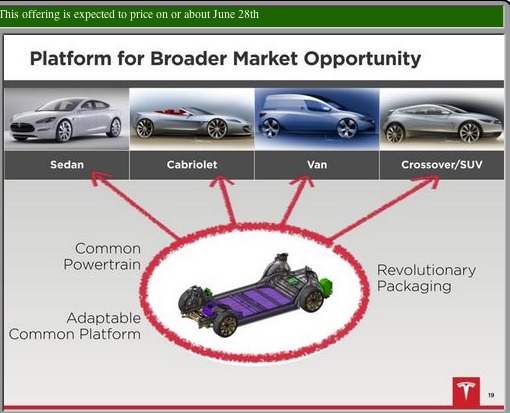 Yes. we’re finally getting that electric skateboard GM promised us 10 years ago! Let’s hope Tesla can actually make it work.

Does anyone know if Tesla is doing the chassis design for this, or if they have licensed Lotus’ VVA platform?

Supposedly they are planning to stop Roadster production next year when the Elise gets refreshed and moved over to the Evora platform, which kind of suggests that they are trying to go it alone.

If they are trying to build an entire engineering infrastructure from scratch and have a production car on the road in 2012, this IPO seems like a terrible investment. They are also buying NUMMI, another likely boondoggle. I like Fisker’s model a lot more.

Scott: I know that Mercedes invested in Tesla. The early rumors were for the S to be based on an existing Mercedes platform. I can’t see it surviving if is developed in house.

Their deal with Toyota could mean their real long term plan is to function as a parts supplier selling their platform to the bigger brands.

interesting theory and business transition… could be…

There is a sucker born every minute.

Well, ain’t it the truth… that’s exactly what I was thinking when Ford stock was hovering around two bucks a share in January of '09.

Stock prices really have no connection with reality. It represents feelings and emotions. That’s why BP is going down.