Shocked — that Teague would make a big deal out of a bicycle concept with such an inherently week structure that the frame would likely collapse as it strikes its first pot hole or curb. 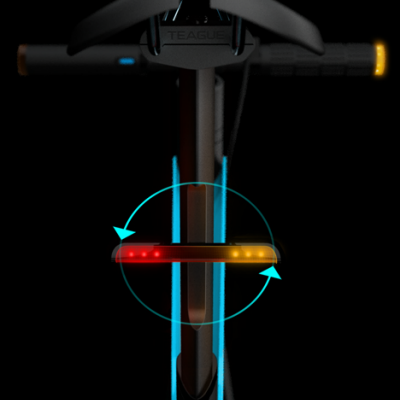 Pulse, Teague's new concept for an urban bike, addresses all the necessities of a standard bike commute. Taking cues from both fixed gears and cafe-racers, Its features include electric turn signals controlled from the handlebars and a luminescent...

I am all for designers exploring concepts but I am a bit bewildered at this one.

Why would they treat this like it was some revolutionary design, when all they’ve come up with is a track bike with turn signals (not new) and pedals that stay upright (also, not new). Then they don’t explain the frame design at all.

In their defense, it does look cool.

I don’t know bikes that well, what would be the structural difference between a full tube and a half tube as shown here? 25% the strength? Less?

It’s got to be even below 25%. You’ve lost all of your structure and you really can’t roll a tube that way with any hopes of it staying in shape. Maybe if you hydro-formed it, but even then you have no triangulation.

Maybe I’m just mad because I have very particular opinions about bikes in general. But to me if you’re going to put out a concept touting that 100 years of technology have basically failed because bikes didn’t have pedals that stayed upright, and turn signals (that will be removed from 90% of the purchased bikes immediately), you’re really missing the bigger picture.

There’s plenty of room for improvement out there, but a trendy (becoming less trendy everyday) fixie isn’t it.

Also, why do “urban” bikes always need to be fixies? I tried riding fixed 5 years ago and did not care for it at all. It did not improve my pedal stroke and I found going downhill to be annoying even at 75 gear inches (I don’t like a cadence above 110). Chicago is flat as a pancake yet I can still find hills where I would bounce around without multiple gears.

Why didn’t they rout what I assume to be the brake cable internally? If they want their bars to look like something Russel Mitchell would do, loose the cable.

And finally, why don’t they recharge the battery with magnets on the front wheel? They have a disc brake there, a couple of magnets wouldn’t ruin the aesthetic.

That and the fact the main triangle would twist like a pretzel on the first pedal stroke would make me never even consider this bike.

I bought one of these used a couple of years ago to use as my commuter. Please disregard the ugly graphics (I covered the one on the seat stay with a piece of electrical tape it was so offensive) but it has an excetionally tight geometry, perfect for quick manuevers in traffic. It does get a bit twitchy on descents over 30 mph, but otherwise it is solid like a rock unlike the Pulse noodle.

I’d really like to hear some defense of this frame. It does look cool but I can’t see how it would be rigid enough. Carbon nano-tubes?

I think it looks pretty cool. I would agree also that if minimal is what you’re going for, make it really, really minimal. In terms of strength and durability, I’m not aware of any materials that would be strong enough in that shape. I like the glow though.

Hmm…unfortunately this is a miss for me. And not from a bike aficionado perspective. It looks good because of good photography and/or renderings. Not because of particularly good design. It also LOOKS cheap. It has a very platicky feel to it. Not good for the Design Industry that promotes “green”…and “green” doesn’t just mean riding a bike. Product longevity should play into it also.

Granted, this is all perception based on a beauty shot…but Teague did open themselves up to this.

When I was at University studying engineering we were given a demo of the effects of cross section and torsional stiffness.

We were shown a square box section created by simply folding a sheet of aluminum into a long box tube- an “Open Section”. The box was twisted at one end and a measure of deflection measured.

We then pinned the box along the overlapping edges with rivets along its length to create a “Closed Section” and measured again.

The result: the closed section was, wait for it, 1700 times more torsionally stiff than the open section. It was a simple but very powerful demonstration of closed vs open sections.

I’m sorry, but the Teague concept takes bike structural design backwards almost two hundred years, and they, and Core77 have done the design business no favors by giving this Hypershot fantasy editorial space.

(Nice shade of blue though…)

Bobcat: Thanks for the engineering lesson. I think we can call this a FAIL now.

Comparing “fixies” ( I admit I had to look up the term) to naked “cafe” racers… . and tying it all together with the Pulse? Who writes with drivel? It reads like a second year class project.

Cafe racers are simultaneously souped up and paired down. Leaving behind a vehicle that is spare without being simple. Raw but not primative.

The race pedigree of these bikes is overkill in the dawning era of efficiency and responsibility. Can the character of this bike survive below the 1000cc line?

Nice to know Teague is aware of it’s surroundings.

Teague presents > a tribute to the triangle> . A reinterpretation of an icon, which unifies individual components into a coherent statement in tune with contemporary needs (and attitudes). Equal parts gym membership, fashion statement and Kyoto pact contributor–Pulse is a transportation solution in synch with the needs of today’s urban denizen.

I thought this was a quadrangle … guess I should have paid more attention in geometry class. 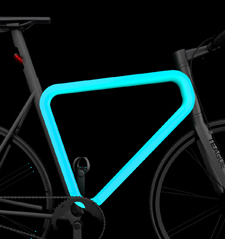 This whole thing leads me to wonder if they were dumbing this project down because marketing folks (ie, people with money) are so dumb, or are we, as designers, overestimating our own intelligence? Just imagine, this is Teague, one of the first consultants…a giant in the industry. And this is a halo project for them? It’s like Chrysler putting the K-car on the front of their annual report.

It is what it is, a concept, I’m sure you guys know what you’re talking about when it comes to the structure of this bike but loosen up, it’s a quick render. A quick exploration into trends and a different target market and customer it seems Teague usually designs for.

It is what it is, a concept, I’m sure you guys know what you’re talking about when it comes to the structure of this bike but loosen up, it’s a quick render. A quick exploration into trends and a different target market and customer it seems Teague usually designs for.

Ugh…seriously? “It is what it is”? I would agree with you 100% if this was coming out of a student portfolio. As already stated, this is a company that has been around for what, 75 years? They’re a pioneer in the field? They work with Boeing, they SHOULD understand engineering and reality constraints.

If you’re on a pedestal, which Teague is, you’re held to a higher standard. I expect the best from them and they should be proud that I do hold them to that standard and not take this as a personal attack. Design is not just pretty pictures.

A quick exploration into trends and a different target market and customer it seems Teague usually designs for.

This is the crux of the problem here. If it were simply labeled as “Hey, we know this will never fly, we’re just having fun with it” I would have no problem at all. But as Lmo pointed out, it reads like second year student material. I mean, the audacity to claim that they are solving 100 years of “problems” on a single fixed gear bike is insane. And if they were exploring trends, they would quickly discover that the fixie wave is rapidly cresting. They’re combining two things that have no business together. Turn signals and fixed gear bikes. Clearly there was little “research” done.

NURB: why does anyone want a fixed gear bike? Just curious.

Oh man… there are many many reasons.
Here are a few from both sides of the fence:

Reason 4 is the original use for a fixed gear track bike. Reasons 1 & 2 are the more recent reasons for riding a fixed gear. Reason 3 is the trend officially jumping the shark.

There are many others that I’m sure people will chime in with, but this covers most of them. I live in Minneapolis which has a huge fixed gear following, not only for commuting, getting around, bar-hopping, but for freestyle tricks as well. I’ll bash fixies all day, but when it comes to freestyle stuff I shut my mouth pretty quickly. It’s quite amazing what these guys (and gals) can do.

NURB: why does anyone want a fixed gear bike? Just curious.

NURB, please pardon my butting in.

Also, from a historical perspective, after they allowed gears in the 1937 TdF and derailleurs were more accepted, cyclists still liked to ride fixed in the winter. The combination of moisture and the fact that not a lot of roads were paved wreaked havic on gearing. This continued with the majority of racers into the 60s until you started seeing the majority of roads being paved. There are racers who still do this today, but not as much. I saw a good video on youtube about these guys riding fixed in different cities and in Austin, LA joined them. They were better at tricks than him but at one point he got his cadence over 150 and dropped them like a bag of wet sand.

I completely agree. There are benefits (mechanically and aesthetically) but where I get annoyed is that many riders choose to chop their bars down to basically the width of their fists “to fit between traffic”. How wide are your shoulders? Or Hips?

Which leads me into another dig on this Teague concept. So you’ve got little lights on the end of your bars? They’re chopped so short you won’t see past your hips. And anyone who rides through traffic like this, isn’t going to use them:

NURB, I agree, I found the lights on the bars and the seat post to be ironic. That won’t get used and are contrary to the whole fixie/hipster movement. And for that matter, so is an off-the-shelf fixie. I can’t ever imagine a hipster buying a Pulse.