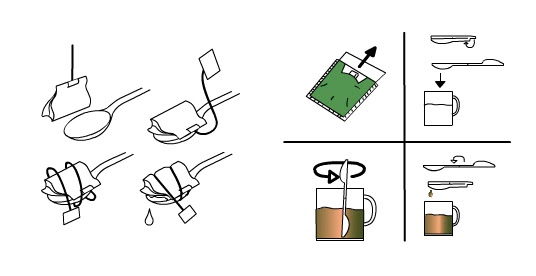 This concept was made few years back. The concept is a polymer spoon with 2 heads. One for spooning up sugar and other one got thee in it an...

A tea packaging design I designed. Kept secret for few years but gone less and less usefull, only in restaurant or street use could be usefull.

What you all think of this concept?

I don’t really know how much better of a job will this do.

I am a tea person, and in case you don’t know, tea bags in Asia and Europe are much lighter in taste than those in the US. I am comparing Lipton to Lipton.

Typically, I can use a tea bag once or twice in Asia, but tea bags in the US are really concentrated. I have to take it out after dipping it so that the tea won’t get too strong after a minute or so. That’s why I don’t think your “problem” is an issue over the pond.

On the other hand, why not just redesign the tag so that it does a better job to tie the bag to our tea spoons? Do we really need a customized spoon to do the job? Won’t that be too wasteful of material? Think about those extra parts you need to make and purchase just to do the same thing, and the extra steps the user needs to take!

Dipping motion and stirring are 2 different. Dipping only release the tea out of the leaves. But stirring blend it overal with the water. It faster and release faster blend faster.

This is a basic principle for good tea cup. But I am not sure about the sizes of the bags if they differ from different countries. I’ve seen 8 grams teabags for company uses and 4 grams that are standard that you can buy in stores.

The idea was for commercial use in a cafe or restaurant or snackbar because mostly you could get more cups out of one teabag and and just too much waste. However making it from bio polymer whole thing can be thrown in a garbage can and that they don’t have to clean the spoons.

If that’s so, then why not design a stirring stick that IS the tea bag? A stick that you can refill with new tea leaves so it is reusable.

seems like a solution looking for a problem. overcomplicated, different people have different tastes, like different teas, and have preferences to the kind of spoons they like. doesnt seem like the concept would go far…

If that’s so, then why not design a stirring stick that IS the tea bag? A stick that you can refill with new tea leaves so it is reusable.

actually, a tea “ball” is what was traditionally used before tea bags came into use. 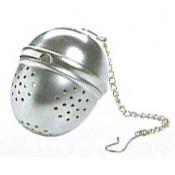 there are also lots of modern equivalents on the market as well.

This part is missing though in all the design to push out the water in the tea leafs. So you wont have a wet pulp of tea leafs also no stains what still comes out it. This is the main concept of the design to get water out of the teabag.