I’ve a friend who manages a new restaurant downtown who needed a list for his rotating taps. I’ve been doing it since he opened. This one’s the latest (number 7 or 8 a this point; I change it every 3 - 4 weeks).
Butcher paper, Conte crayon for the lettering, and Nupastel for the rules. 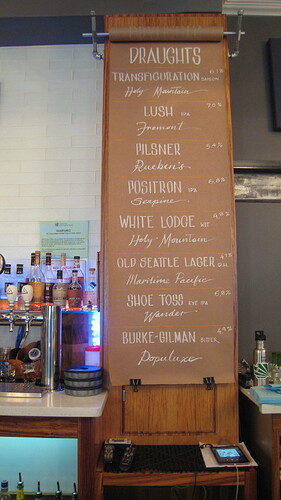 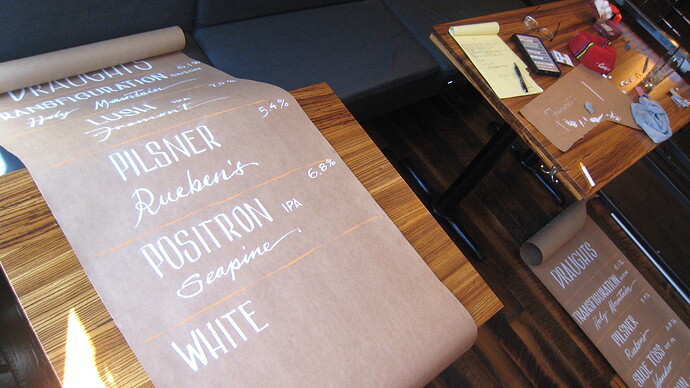 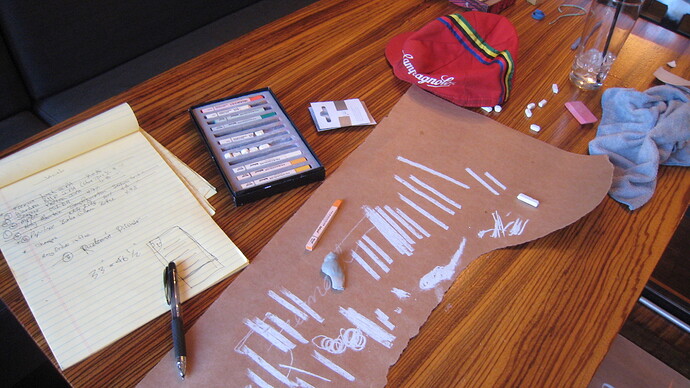 Nice! do you get paid in limited beers? Loving your lettering.

Thanks Yo. Gotta love a good barter system! And the food is great, too.

The only challenge is that I usually do it at a time of day when I can’t hang around to sample the brews or the kitchen fare. Hence, I’ve got a bit of backlog worked up. I should probably schedule a session to work it back down to zero!

Clean! Any shots of some of the earlier ones?

Here’s a couple of shots of an earlier version. It shows some stuff not used, and some changes used once only and abandoned afterwards.

One shows the experimentation with the header copy: “tap list” vs. what we ended up with: “draughts”. Decided “tap list” was redundant by at least one word (it’s clearly a list), and that the UK spelling of “draughts” was a little more interesting/eclectic than just “taps”. I was also experimenting with some type of graphic element, here a compass rosette with the directions laid out “accurately” according to where the list hangs. Abandoned b/c I felt it wasn’t really adding much. And then there’s the outlining of the title in orange. This was an unfortunate choice and I didn’t repeat it. Once it was up on the wall, it just felt a little cheesey somehow. I also the combined that with an ill-chosen move to use a serif font for the title - only did that once as well. Might have been a case of too many changes at once (font change + color outline change) that ruined the potential for either, but in any case, I’ve just stuck to the two fonts overall: sans serif for the beer names, script for the brewery name.

One more thing I changed after this version (this one here’s version 4, the one I just posted above was version 8): there’s two brews from Holy Mountain: “White Lodge Wit” and “Minor Planet Pale”. They are listed together with the brewery below. We found that people were confused and thought that those two beers were just a really long name for one beer. For subsequent versions when there’s more than one tap from the same brewery, I separate them anyway and treat them as individual entities. 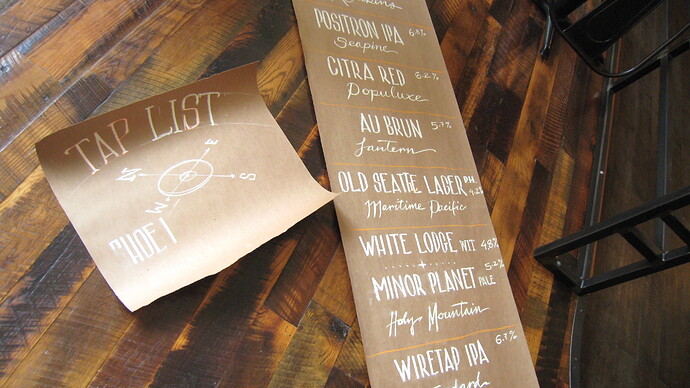 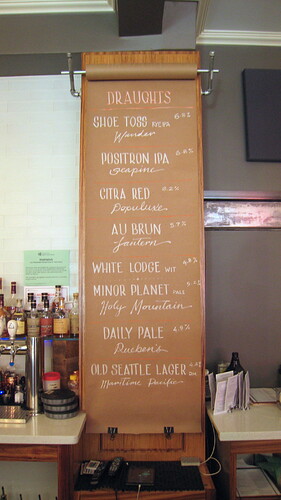 Forgot to point out one “funny” thing: I made a mistake on the “Old Seattle Lager D.H.”: left out the “L” in Seattle. Saw it only after I put it back up on the wall and nearly had a coniption. Rushed in with my Conte crayon and Nupastel for the outline, and drew a little “L” in there and popped a bit with the outline. Luckily the client thought it was funny and good.