A re-evaluation of Design Education in Japan may be in order.

If I was Japanese, I might be two. As an American, I just threw up in my mouth a little. Ouch.

I do have to say, I love the addition of the “street racer” style logos on the side. Almost like a steam punk Fast and Furious. In a hilarious “only in Japan” sort of way.

That thing is so odd, but not odd enough to make it cool.

Heyyyy… … wait a minute… can he say that?

That thing is so odd, but not odd enough to make it cool.

Does anyone remember a featured “student” portfolio project that was a “Model T-like” electric car? It was cool …

For some reason, I love the naked version.

I like it. It’s making me smile right now. It’s like a weird, electric stagecoach golfcart. The upholstery is the absurd icing on the cake.

A single passenger $75,000 golf cart … … that won’t keep the sun off of your head, or has room for your clubs, and apparently uses a lot zip ties.

I’m going to have to second my disgust at the mechanical detailing- awful load paths, dreadful chassis stiffening, welded clevis on a machined wishbone (vomit), uprights appear to be about as stiff as a Ritz cracker, chromed springs. Yuck. And why are all the fasteners so dirty?

I was hoping you’d wade in Scott…

What a waste of everything.

Not much, seeing as there’s no place for the clubs… I take it that the caddy follows with them?

I was hoping you’d wade in Scott…

Yeah, as I was typing that, I was imagining how little force those skinny little tires could actually generate, but I kept on going anyway.

If you’re going to put that stuff on display, at least do it right. This thing really is just hideous in every way possible. The worst of all worlds.

I could not figure out what looked so comfortably familiar about the grill on the front of this thing … and then it hit me … the furnace registers on the walls at GRANDMA’s house!!!

Actually more attractive, and honest, than the Miluira isn’t it? I would buy a Takayanagi ‘Bebe’… assuming of course that I had $75K for a toy car. Top end is probably about the same too… and it seats two!

But it would have to have the squeeze-bulb horn.

So i wonder if those head lights are bulbs or gas burning, like the lanterns they’re styled after.

I spotted this 1913 Excelsior motorcycle at the Old Engine Meet this summer in Templeton, California. It had an acetylene headlamp (and, it was currently registered for road operation). Never did locate the owner 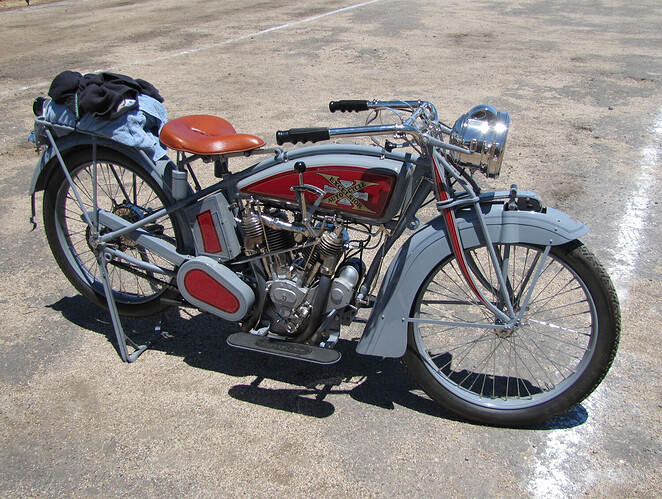