In the US it was presidents day today, which means a nice random day off. I spent most of the long weekend doing projects around the house, but I took a few hours today to do a little concept project. Just a fun one pager. I’ve been following the smart watch thing like a hawk. The tech geek in me loves it, but the style nerd in me is waiting for a real watch maker to enter the fray.

I think it all happen. Just like traditional car makers are making electric cars, traditional watch makers will make smart watches, even if they partner (hopefully or usability and compatibility’s sakes) with a tech company like Apple, Google, or Microsoft.

So I took a short trip down a road to look at what a Tag Heuer smart watch might look like. I haven’t really got into drawing a timepiece since my Nike days. I got into the key screens and gestures a bit as well. Everybody needs practice. Have to keep sharp. 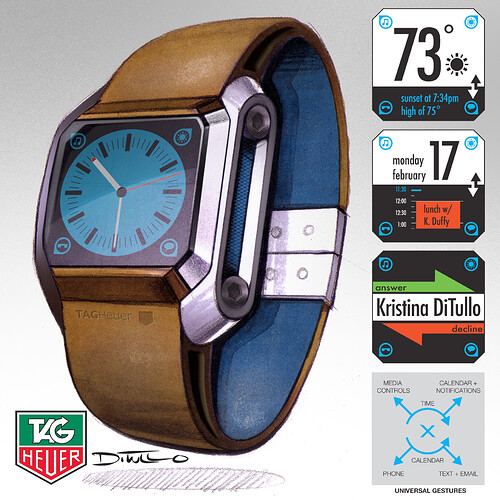 I can tell you’ve spent quite a bit of time on the gestures! That seems very natural, to me. I love the idea of “winding” the clock face to make the clock appear.

Does the clock face itself need a bit more “bling” (for lack of a better term) though? It feels a bit subdued for a TAG, to me.

The idea of using corners for gestural interaction is a good one. The Technogym fitness equipment interfaces have been doing this for a while. Why it makes sense on those products (and maybe for watches as well) is the relative difficulty of hitting a target with a finger while both target and finger are in motion (watch on arm, running person on treadmill).

I see the Monaco influence and some classic details but wonder like Chris if there should be more bling and micr0-details. But kudos for doing ‘work’ on a weekend. (wistful)

Thanks fellas. Slippy, good eye on the Monaco influence. I was ensconced in vintage Tag images for a few days. I on;y spent a few hours on this and the face was the last thing I did. It definitely could use another pass, but was already getting the looks from my wife that said “wrap it up”

I’m pretty happy with the gestures, the spinning thing just came rather intuitively, 20 minutes of messing around with gestures on my watch face and off… lucky hit. I think there could be something there though. Targeting on these small surfaces is really hard, I think most everything is going to have to be some kind of a swipe maybe other than a simple tap to confirm type single hit… like turning an alarm off. I envision starting in a corner (like where the phone icon it) and then dragging that diagonally to enter into the telecom space.

If I have more time next weekend I’ll have to do a few more screens and iterate on the analog style face. I like the super analog sketch with a screen composited in. I was really just messing with the style. Have to keep practiced up.

yo: What smart watches currently out there do you think are doing a good job of ID? (interaction aside)

The overt screw details on the Samsung model are a strange design choice.

I likewise can’t wait until there are some well considered smart watches out there. Collabs with existing watch brands would be nice, but I wouldn’t expect to much, I think that someone new needs to get into the space to shake things up like NEST did.

All that being said, I wonder if watches are the perfect place to have a new vs. old interface paradigm. Similar to recent Leica and a few other digital cameras. Feature control with physical buttons, rotating bezels, analog dials, etc. … not everything needs to be a digital touch screen.

To me, a great smart watch would be a normal watch when you just look at it (clear sapphire crystal showing analog movement), but have additional quick info at a glance above the analog face when you press a button or physically manipulate something, or even just register a tap with a motion sensor like the Nike+ Sportwatch. I’m not sure swipes and gestures are that necessary, and I don’t know how much “interaction” you would really need that necessitates a full digital UI.

If I had more time, I’d throw down a sketch. But I don’t so just wanted to leave my 0.02$ worth while commenting that I like where you hare going with this… less Star Trek, more Jewelry. Concept would be a good fit for Fossil or even NSW (Nike Sportswear) I think.

Thanks R. It is a fun project to throw down on. I wish I had more time to noodle on it, maybe do a women’s version. 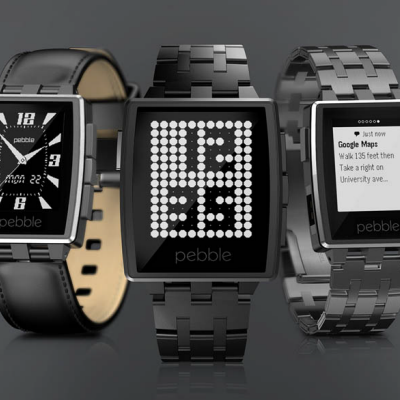 There were no shortage of smart watches at CES this year, but PEBBLE seemed to be the only maker who evolved the industrial design of the smart watch beyond a mini smartphone stuck on your wrist. It was only a matter of time before these devices... 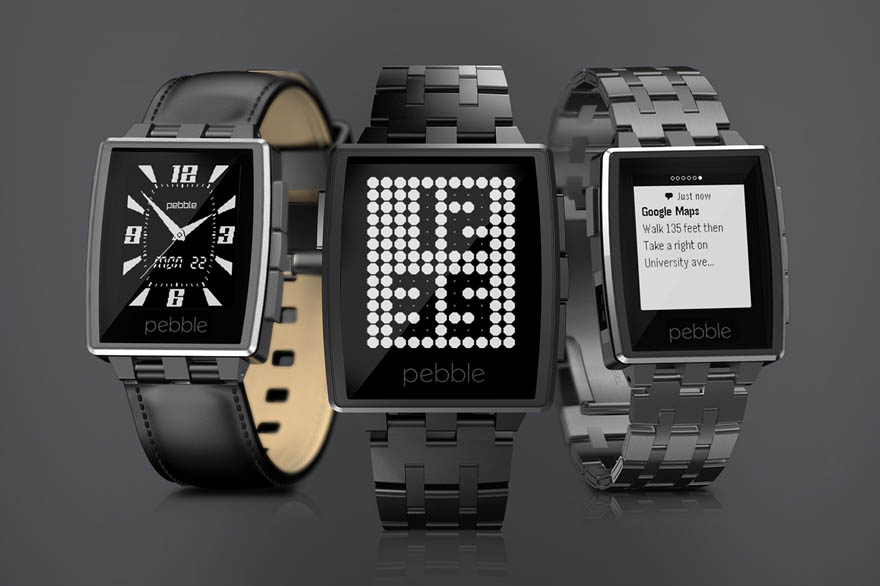 Digging the gestures and screens.

simple and effective - the screens have a slight “retro” feel to them which is refreshing.

I can see the Monaco in the square face… I immediately thought Bell & Ross (where are my huge numbers!?)

Nice cut away in the band and blue color pop to break it up a bit.

To me, a great smart watch would be a normal watch when you just look at it (clear sapphire crystal showing analog movement), but have additional quick info at a glance above the analog face when you press a button or physically manipulate something

A simple solution would be to just have the screen below the hands. I think I could live with the clock hands obstructing a bit of view if they are thin enough. So the visible layers would be as follows:

Possible but these issues would have to be overcome:

Digging the gestures and screens.

simple and effective - the screens have a slight “retro” feel to them which is refreshing.

I can see the Monaco in the square face… I immediately thought Bell & Ross (where are my huge numbers!?)

Nice cut away in the band and blue color pop to break it up a bit.

Thanks Jim. Yes hard to escape my B&R obsession! I was trying by getting some of that Monaco look in there but the industrial designer in me just couldn’t resist the big sections and set screws!

That’s what I was trying to propose. Thanks for explaining it better.

Ultimately I think the key to the smart watch is understanding that watches are primarily for glanceable info, not interaction. Time, date, message alert, weather, directional guidance maybe… Nobody wants to start typing or pressing a lot of ui elements on their wrist. It’s just not very comfortable.

Does that exist though outside of labs?

That’s what I meant by “I think I can live with it”. I believe it’s quite easy to focus on one thing. There are plenty of watches doing this already by having several dials, date, even digital displays. This would just be a more advanced display fetching info from you phone. Granted, I don’t imagine alot of complex info showing on the screen, only notifications or some icons.
Most of the time I just want it to be a watch really…

These guys have built a pretty nice product. Cogito 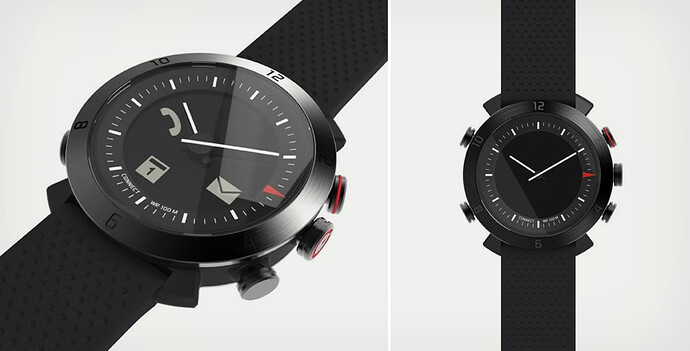 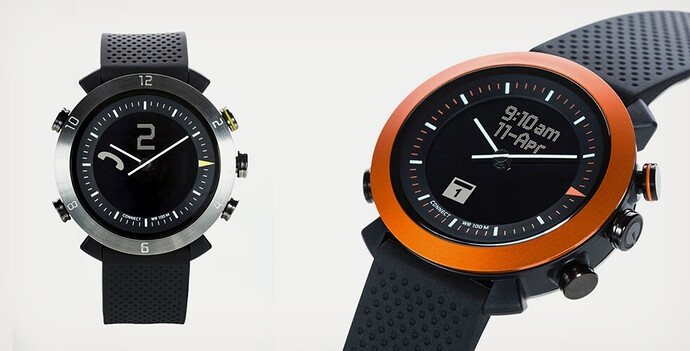 Does that exist though outside of labs?

It will within the next 12-24 months in a more mass form. The tech is not far fetched in the realm of a concept.

These guys have built a pretty nice product. Cogito

Hadn’t seen that thanks Brett, looks like someone is stacking already in a reasonable thickness with a capacitive interface.