Wondering what’s the difference in the line quality or pressure levels? It seems cheaper to just buy a tablet p.c rather than a cintiq that only hooks up to your p.c. I guess what i am truly wondering is this: If I’m using sketchbook pro on a tablet p.c. will the line quality look as good or close to a cintiq? Any feedback would be appreciated 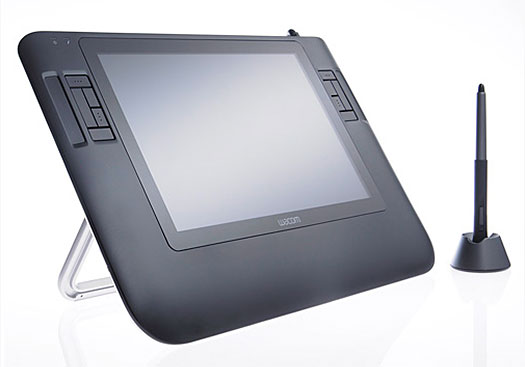 Well, for what its worth, I have been going through this debate for the past 3 years or so. I went the route of the Tablet PC and in several ways, I regret it.

I would have preferred to get a less expensive laptop or workstation and splurged on a Cintiq. At the end of the day, I would have paid more, but I would have gotten a better product.

well your $0.02 may have just saved me a couple hundred…lol

Wacom are really good at what they do, so I would definately go with those instead of an tablet PC.

Is the sensitivity better on a Cintiq, yes.

Is a Cintiq portable? No.

While they both have pen displays, they offer much different functionality. I did a lot of drawing on my tablet and while it had it’s flaws, the fact that I could whip out a sketch on a plane, in class, wherever I wanted was very nice. Sure I could have just used a notepad and a laptop, but that sort of defeats the purpose.

The tablet PC sensitivity is less of a big deal if you consider it a portable sketchbook, and not a portable rendering device.

Having both, I can tell you that I LOVE having both.

If I had to choose one, I’d probably choose the tablet pc. The best function of it, is (as noted above) the ability to go anywhere with it and I have a desktop that does a bang up job. Secondly, imo, there is little difference between the 1012 pressure levels on the Cintiq as compared to the 1012 on my tablet. Both are Wacom driven. The only negative to my tablet, is that its a 12.1" display which makes for small gestures.

In regards to having one and not, I don’t know why most students don’t use it- I’m guessing they just don’t know. And the reason why most professionals don’t is that they’re strapped to a desk anywho. Having walked into a clients office and put down work with them- has been impressive and helpful to say the least.

But again, I speak from a small minority that enjoys both sides of the fence. Either way you choose- enjoy them, most don’t see the value.

google modbook and I think you’ll find an answer to that problem. I’m seriously considering buying a refurbed macbook or one on clearance and sending it straight in to get it modded.

I think even in a professional scenario I’d have a hard time justifying a modbook.

For the same price you could buy a Macbook Pro AND a high end Tablet PC for sketching.

The modbook seems like an awesome sketch-specific device, but the versatility of a tablet PC is it also works good as a laptop for when I want to write an email.

that’s a good point. Flat out buying a modbook is quite expensive, but I think with some effort, the cost can be manageable. I was thinking of buying a refurbed macbook, probably one with the first or second gen intel core 2 duo processors. I’ve been watching ebay, and other dealers, and they’ve been popping up everywhere at pretty reasonable prices.

If I get a macbook, I’ll send it in to get modded, and provide them with my copy of leopard, so I don’t get charged to them install a new version of leopard on the tablet. Also I’d buy and install my own ram and hard drive, which would be cheaper than having them install it.

Of course I’m just entertaining the thought. Many things would have to work out in the capital department for this to work.