Just a got sample to play with…

The hardware feels pretty solidly built. The MG case feels stiff and it has good heft, but there are some pretty serious gaps and the stand feels only slightly better than flimsy. It also holds the display at an angle that may or may not work for you. I work at a standing desk so the viewing angles are a little off. Slouched in a chair at a desk is probably fine though. The 16:9 ratio looks great horizontal but is awkward in portrait. When holding it with one hand, it gets pretty heavy, and the capacitive touch Windows home button prevents you from holding it dead center in landscape mode. The screen res is good. It looks pixelated next to a retina iPad, but overall is crisp enough.

The software is really interesting. The “Live Tiles” side looks really clean and has some nice animated flourishes, but is a little confusing to figure out and remember how to use. The “Desktop” side looks just like 7. It has folders and desktop icons and a task manager and even a disk defrag utility. (What?!) I also have the touch keyboard, which is pretty responsive and usable, and I plugged a USB mouse in too. In this mode it really acts like a little laptop. It makes me wonder how far I can push it in terms of Adobe suite or even SW or UG or Alias in a pinch.

Overall the MG hardware construction is pretty good compared to Android tablets, but nowhere near iPad seamlessness. The aesthetic design is a total yawn, but the two faced OS could turn out to be really good. It makes me want to see a workstation level machine that I can use as a basic tablet when that’s all I want.

Let me know if you have any specific questions.

Brett: Did you get it for work? I’ve heard that MS might be a hit with offices that don’t want to mix Apple into their mix of computers.

Well, work paid for it, but it’s really just for us to play with.

For a lot of people just doing PPT, Excell, Word…I could see it working. It really takes 2 leaps of faith though. 1, buying to the Live Tiles side of the OS and that whole developing ecosytem which is still in its infancy, and 2, that a tablet with a keyboard is enough to ditch a laptop.

There’s the Pro version coming out soon which I think has a more robust Desktop side to it. The RT version still has limitations on what can be installed.

But I just have Windows Phone, so maybe the Desktop team botched it?

It had a nice feel, and the ID was pretty straightforward - which I liked. Masculine feel. Build quality was better than other slates I’ve felt like the Samsung 7 and EE Tablet. Felt responsive flicking through the Windows 8 interface and I’m sure it’s capable for decent resolution renderings.

The cover was nice, but I seriously don’t think I’d ever use it as a keyboard if I could avoid it. It was hard and very solid. There was a second cover that had a notebook style keyboard (depressable keys), but it had a cheap feel.

From what they told me, there will be a ‘Pro’ version coming out soon with Stylus enabled touch screen. Here’s the spec sheets Looks thicker.

There’s a ton of nice looking tablets coming out over the next couple months, some with Wacom digitizers… should be good pickins around Christmas for a modern & portable Win8 sketchpad!

Oh, and the pop-up store

We were near Times Square the evening before the opening and stopped by after midnight - the place was packed.

don’t know if MS was paying people to act crazy, but there was a lot of yelling and cheering… it was all very strange. 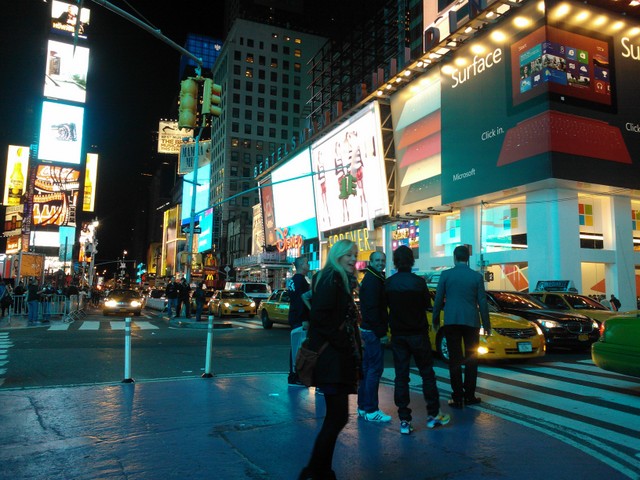 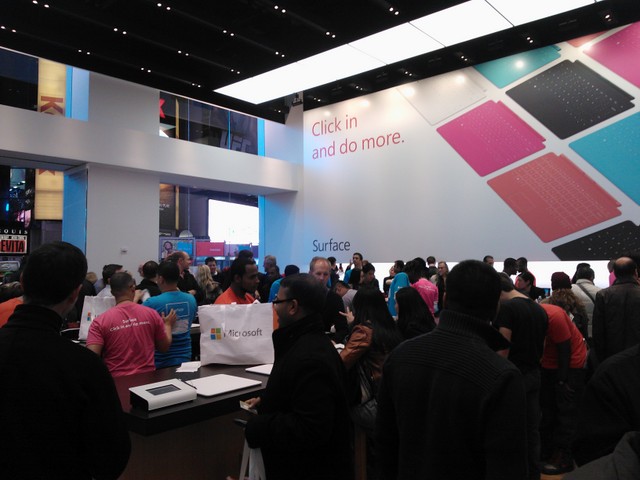 It looks like a very cheap version of an Apple store. Great job MS!

don’t know if MS was paying people to act crazy, but there was a lot of yelling and cheering… it was all very strange.

Wouldn’t be surprised I have a friend who was a freelance “event hypeman” for stuff like this, he traveled around to different events waiting in lines posing as a fan boy.

Sad to hear the typing experience is subpar. I have the Series 7 and was contemplating jumping ship.

[quote=There’s a ton of nice looking tablets coming out over the next couple months, some with Wacom digitizers… should be good pickins around Christmas for a modern & portable Win8 sketchpad![/quote]

Wacom digitizers??? Really? Like, Cintiq level of sensitivity? Which ones?

Not cintiq, but wacom penabled - between 512 and 1024 levels of sensitivity.

Not cintiq, but wacom penabled - between 512 and 1024 levels of sensitivity.

I’ve been chiming in on a few of those threads, as I am awaiting the perfect tablet…here’s what I’ve found thus far;

Brands coming out with Win 8 tablets/hybrids with stylus support (some haven’t provided enough details to know whether they’re Wacom active, passive, capacative, etc) but so far almost every one is too small & isn’t spec’d with GPU power to run CAD quality stuff);

**The Paceblade is the only one I see so far that is serious about graphical users - note the video below [I still think 12.1" is too small though], has the actual word WACOM in their descriptions and has options that allow you to spec the model to our liking. Since they’re not here in the US yet, I intend to visit the distributor in Barcelona in March - if they have one spec’d like we want, I might just buy it. The nearest to it seems to be the EB121 and support from Asus would no doubt be much better but I’m waiting for them to come out with a Win 8 tailored next gen version with a serious GPU.
http://www.paceblade.com/index.php?products_details=2 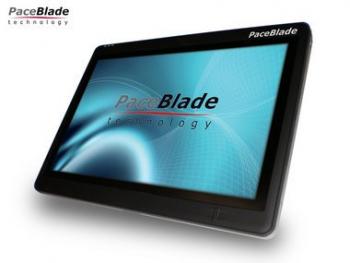 [CeBIT 2012] During our tour of CeBIT, we have spotted the PaceBlade PM 240 (thanks to a tip from Wayne Rash), and this is a rather unconventional...