Hi guys, i’m not sure if this the right spot for this. Let me know i will move the post.

So i’m working on creating a model of the g203 on Solidworks and i’m having some trouble on getting the form right. What i have done so far is to sketch each view from a reference image and then do a lofted surface to create solid form, but my surface is not coming out correctly i have an idea why just not sure how to fix it. Let me show you what i mean:

•Picture 1
Here you can see my sketches, one for each profile.

•Picture 2 and Picture 3
Here is the lofted surface from the sketches, as you can see the resulting form does not correctly reflect the form of the mouse. As the mouse is round the top part of the model is larger than the bottom, the roundness intersect at the base of the mouse, but as i’m using the base of the as guide for the sketch the surface does not show the total roundness of the mouse (this a bit weird to explain, my bad if doesn’t make much sense). You can see what i mean more clearly in the next images.

•Picture 4, Picture 5 and Picture 6
As you can see here the created surface doesn’t reflect the reference image as it should. What i don’t really know is how to get the lofted surface to create the right form, i need to use the base of the mouse as my guiding sketch because that’s where the roundness ends. I could sketch the outer profile of the top view, but then the bottom part of the mouse won’t be round. Also i know my front sketch is mostly correct so i think my problem is with my right sketch (the guiding curve of the lofted surface) i just don’t know what could i do to fix it.

Oh, no - that is not the right approach to surfacing. Think of surfaces as stand-alone objects that have to be razor sharp. These surfaces are later blended into the resulting form. Curvature comb and zebra evaluation will tell you if you are heading in the right direction - this way it will be all wonky.

See the top surface? It is one loft between at least 3 curves - one with the finger indents, one at the top, one at the other side. Draw the profiles on perpendicular planes to the heart line (the ‘spine’ of the loft).
Draw the flat surface on the bottom and loft an angular profile around it, except the front part which is clearly a hard cut with a sweep. Then Trim&Knit. You can then work open the intersection between top and bottom surfaces with two split lines (the Hold lines), blend the two with a Boundary Surface to create the soft blend. Variable curvature fillet is an alternative. Fillet the front cut then add details.

It is simple once you start surfacing individual surfaces constrained with 3 or 4 (not more) anchor points. Keep posting!

While not the same Logitec mouse, I prepared some Solidworks tutorials of a similar computer mouse. You can explore the surfacing in the feature tree, and also turn on the “Part Reviewer” functionality (Tools> SOLIDWORKS applications> Part Reviewer) which will show some comments of why particular features were used and the thinking behind the modeling strategy. Hopefully this gives you a starting point for modeling your particular mouse. Good Luck! 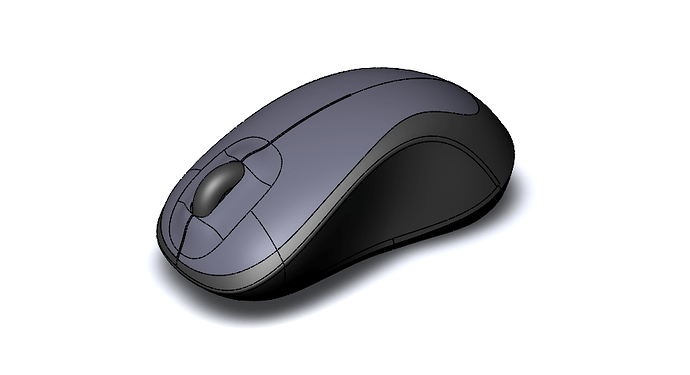 Great stuff. There is a difference in modeling between 1. Defining boundary edges and then ‘patching’ in between these curves to generate the surface - known as Patch Modeling and 2. Creating surfaces that extend beyond the model’s dimensions that are then trimmed with split lines. With the latter, intersection lines are not pre-defined but a result of the 3D surfacing construction which often brings better results. The reality is somewhere in between. It is up to every designer to learn when to use which type of surfacing method.

While not the same Logitec mouse, I prepared some Solidworks tutorials of a similar computer mouse. You can explore the surfacing in the feature tree, and also turn on the “Part Reviewer” functionality (Tools> SOLIDWORKS applications> Part Reviewer) which will show some comments of why particular features were used and the thinking behind the modeling strategy. Hopefully this gives you a starting point for modeling your particular mouse. Good Luck!

This is a sweet model and I’m going to review it with my team, all of whom are elbows deep in SW at the moment.
Little clarification though - people should start with the part file Mouse Master in order to see the primary surfaces, which are inserted into the other components.
Again nice model and thank you Lowe9.

…sh*t, I didn’t know you can extrude a 3D sketch. Wowzers.