Surface Duo: Do we care?

I don’t know why, but I like this concept. Anyone that has been to Asia has seen a large amount of huge phones. This gives you an even bigger area to write emails and look at documents. I’m not sold on the folding phones yet either and when I see this, I wonder why anyone is bothering. The LCDs are very close together and I love the way the hinges are designed. I’m curious what the fit and finish will look like in person.

On the other hand, who the heck is paying $1500USD for a Microsoft phone/tablet/thing running Android? I don’t know either. 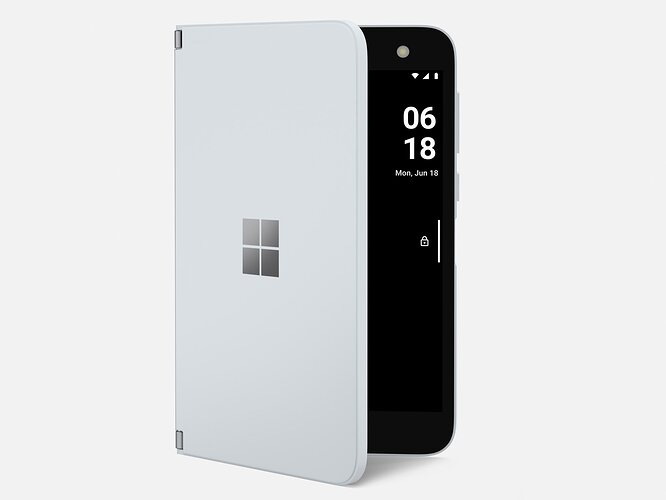 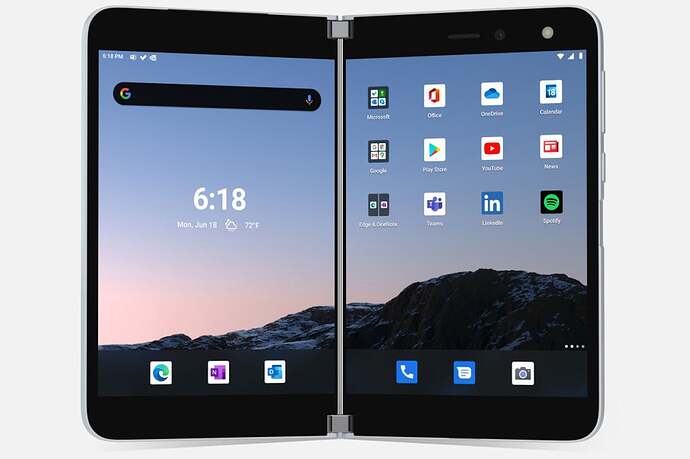 I think when it comes to having a consistent touch surface (imagine dragging an icon from left to right display, or needing to draw) the flexible screen folding device might have an edge even though it’s not “perfect”.

I think every ID student has had a two screen folio device sketch somewhere in there notebook at some point in time. I could see it being useful for the “multi-taskers” who want to be able to view an email and another document or similar at one time, but thats a very small population. I recently picked up the Galaxy S20+ which is a pretty big display, but the standard split screen view is pretty limited in terms of actual usability.

Microsoft makes so much money they can continue to throw hardware at the wall regardless of if it makes money. There is no shortage of new surface form factors over the years but not sure any of those products have ever turned a serious profit.

Microsoft makes so much money they can continue to throw hardware at the wall regardless of if it makes money. There is no shortage of new surface form factors over the years but not sure any of those products have ever turned a serious profit.

Yeah, but their approach is more considered than the newer tech companies and all their speakers and dongles (yeah you Goog and FB)…where the hardware simply is an extension of the ecosystem of selling your data, or selling you stuff (amzn). The ‘More Personal Computing’ segment (listed below) had an operating income of $15.9B. I’m sure its not as wildly profitable as other segments, and their recent SEC 10-K filing mentions stuff like Xbox hardware revenue declining 31%.

The Duo ID seems rather ‘plain’ but I bet it is impeccable in the flesh. The wide bars on the top and bottom bug me though. I’d gladly use one but not ready to shell out that much of my own money.

Our More Personal Computing segment consists of products and services that put customers at the center of the experience with our technology. This segment primarily comprises: 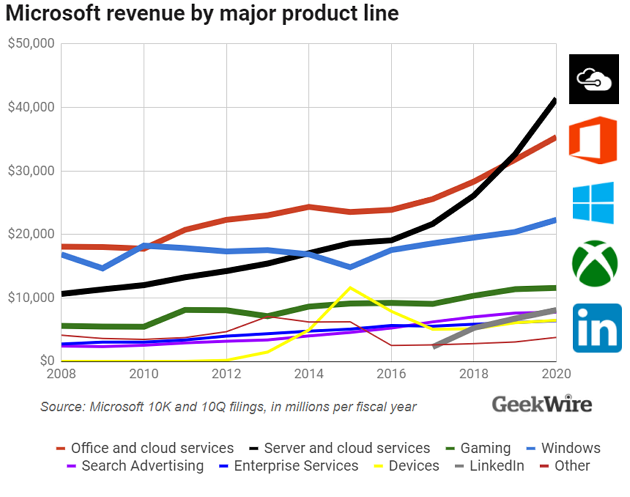 Whoa! Those images are quite shocking in their communication of the design’s crude form and details development. Looks like a development proto at best.

If this is Micorsoft’s best effort, they are clearly not paying their display technology vendors enough to get the latest gear, or those vendors is Asia are holding out on them because they have the next leap in mobile phone innovation and want to bend the market to their advantage. I’d bet on the latter…

I played around with Samsung’s and LGs offerings on my last trip to Seoul. There is no comparison with what Samsung is doing in the foldables space. That Samsung fold is a game changer indeed. In my analysis, for this type of concept to have traction, it needs to have the additional single screen on the outside in order to have any value to the target user who has the capital to invest in such an advancement. The Korean’s are still fixated on pushing luxury and all it entails however. Not very post-Covid at all… 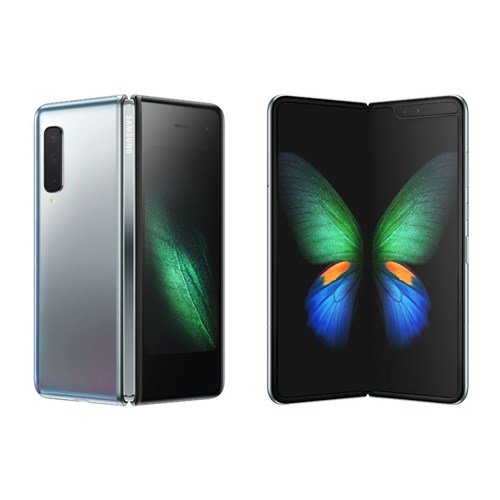 I think it’s odd that they mostly present it in the closed form. I’d imagine once it’s out in the wild most people will actually keep the screens facing out and use a single screen for quick interactions and only bother opening it up when doing something more significant.

I’m curious to know how easy it is to type on. At first glance, it seems hard to type with a pop-up keyboard on only one of the screen.

It also seems very business oriented to me. For personal use, I feel like most people would prefer the continuous screen of something like an iPad Mini especially for video content. I think there will be a lot of resistance for the business use case. Companies that (still) lend phones to their employees seem to get fairly high-end phones but 1500$ seems nearly impossible to justify.

I think the screen gap would be very limiting compared to Samsung’s offer, but I wouldn’t mind that it defaults to closed if the screen could go back 180 degrees.

I think the screen flips back on itself for a phone mode.

I didn’t get to use a folding screen model, but I did see one. I thought it looked fiddly. I’m sure MS has access to the same screens, but it seems like there was a reason they didn’t use it.

UI: I like the launcher. I like square icons and the space between them. Interesting that Bing search is now gone. Oddly, I use bing on my phone, but google search everywhere else. I find Bing’s top 3 is usually what I want. Google is better for a deep dive when I might scroll through 100 links.

Not necessarily, most OEM’s (my current company is a Google OEM) leverage Android OSP (Open Source Project) which means they can fork the standard code, add all their value on top and not stick anything back. Usually the only time you “give back” is if you’ve fixed something crucially wrong in the core codebase.

is folding a solution in search of a problem?

the 1st surface phone cleaned up the IDSA awards the year it came out, since MS doesn’t really seem to care about the society any more than most, perhaps it’s just internal PR? they’ve no real intent on getting into the phone biz - so why else?

There is a Surface phone? I thought it was canceled?

no_spec: Everyone wants a statement device, a la iphone. I bet that this Surface Duo is the equivalent of the Pontiac Fiero. In the '80s, GM had a rule that the only “sportscar” they made was the Corvette. Pontiac designers wanted something to give their dealers that would attract people. They pitched a “mid-engined commuter car” to GM management and got it approved. It ended up the Fiero. I bet the Duo was pitched as an expansion on their tablet line, and not a phone, although…that’s really what everyone wanted to do!

Not necessarily, most OEM’s (my current company is a Google OEM) leverage Android OSP (Open Source Project) which means they can fork the standard code, add all their value on top and not stick anything back. Usually the only time you “give back” is if you’ve fixed something crucially wrong in the core codebase.

My understanding is something like double screens needs support right at the core of the OS (even at Unix level) so that things in levels above that (e.g. apps) can take advantage of it. This requires the code to be contributed at that much deeper foundational level so that OEMs can leverage it on their own devices.

This is why Samsung has contributed incredible amounts of code to Unix rather than kept it to themselves - because they had to to benefit from it themselves.

Samsung has the continuous folded screen, how is this a competitor? I can’t see the business use case so much either, unless you’re working with a fixed split-screen PowerPoint template - picture on one side, text on the other - then it works. For personal use I suppose it’s neat you can do e-mail on one side and have a video or photo editor on the other side. But it’s not much more than a gimmick. Imagine watching Jurassic Park and the crack is right down the Brachiosaur’s neck. The Windows logo on the outside should be interactive to show essentials like who is calling, picking up the phone etc. The design can use a power-up too - it’s too much hinges and seams, reminds more of a PalmOne PDA.

I prefer the screen size and aspect ratio of this over Samsung’s weird skinny thing. Having explored this idea myself a few years ago I came to the conclusion that only a triple folding screen would truly suffice for a good tablet experience though… 18:9 then becomes 3:2 in tablet mode (27:18). That obviously comes with it’s own downsides like extra cost etc though.

The Surface hardware has made a lot of synergetic profit, like Apple once did. By moving people to an holistic brand experience (if it works) you buy into not just the hardware and not just the software. People are seeing Microsoft as more than a software maker, they’re seeing them as a computing provider.

My Surface products (gave both the kids Surface Pro’s as well) have been outstanding performers as is OneDrive as a cloud service. I skipped the Duo, V1 is too pilot-lot-ish for me to buy in - I’m hoping V2 is better but honestly, I don’t want something even bigger than this Note 8 in my pocket…I’d rather have a new Razr.

So while my Surface book, Surface pen and Surface mouse are exemplary, my wife over on the other side of the studio has to stop working while her Apple mouse charges (turned over on its back to accept a charging cable (why?) and has to stop using her iPad Pro because the Pencil needs frequent charging (why?) during which she has to keep her fingers crossed that she doesn’t lose the Pencil cap (why?).

You can now get the Surface Duo for half the price. 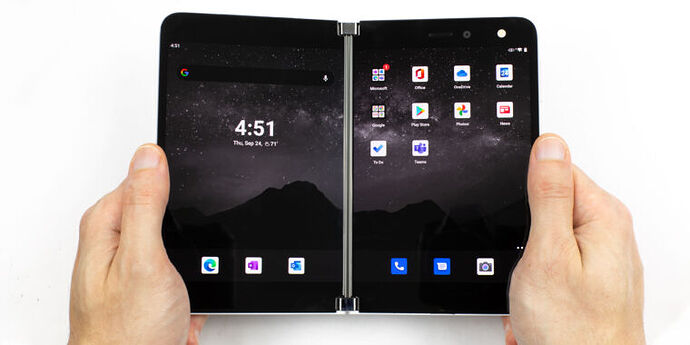 Kinda tasty at that price.

Is a bomb still a bomb at half-price?
Its a bummer to read about the ‘fire sale’ - I thought MS was being more methodical or purposeful with the device strategy.

I think MS recognizes when they miss the mark and are ready to move on quickly. The Surface Duo seemed like a long shot. Not a phone, but not a tablet. Most of the time, the in-between products fail to make anyone happy and that seems like what happened here.

On the other hand, my phone is 4 years old and the battery is starting to struggle to last a whole day. My tablet is 8 years old and I use it mainly for reading. I wouldn’t mind consolidating the two into one product, so maybe…

I saw one of these in the wild yesterday! In what looked like a blind date, the guy pulled out a Surface Duo when the girl excused herself to visit the restroom. He read and poked some stuff and put it away someplace. Unfolded its a large thing. There’s not any comparison for portable devices now, no ecosystem of carriers or pouches.