I was wondering if I could get some help in getting a copy of a particular series of newspaper articles from 2000. Right now I’m reading a required book for my 1st year undergrad design class called Design: A Very Short Introduction by John Heskett. In the first chapter he mentions a weekly series called “Designer Ireland” in the Irish culture section of the Sunday Times of London. They were short articles on different aspects of design ranging from the insignia of Garda Siochanna, the Irish national police; Louise Kennedy, a fashion designer; the Party Grill stove for outdoor cooking, the packaging for Carrolls Number One, a cigarette brand, Costelloe cutlery; and the corporate identity of Ryan Air, a low-cost airline. These articles were published in a 6 week period during Aug and Sept 2000.

go to your schools’ library - ask a librarian.
It’s either in a hard copy storage room, or online through a subscription database they should have access to.

As ‘no-spec’ said, your school library should be able to source for you electronically.
The series pops up with the the times search: 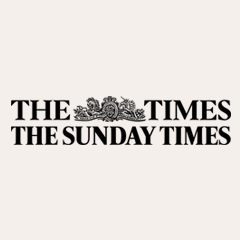 The Times & The Sunday Times

News and opinion from The Times & The Sunday Times

Looks like series extended into 2004 written by Lisa Godson.

Free search on times archives does not appear to work: http://www.newsint-archive.co.uk/pages/free.asp

Thanks for trying … I’ll take it to the school library to see if they have access.

Ok, so I was actually able to use my college library’s subscription to lexisnexis to find the articles. There are actually a lot but they’re quite short (I guess that’s to be expected from a newspaper article). If anyone is interested in the other topics I mentioned let me know and I’ll try to find it and post it up here.

PJ Carroll & Co Ltd, the Dundalk cigarette company, has been redesigning the packaging of its Carrolls Number 1 brand. The result shows what can go wrong when you tamper with good design.

The most obvious difference from other brands is that, instead of being sealed with clear plastic film, the packets are hidden inside a printed wrapper - a splat pack - that makes it look as if the box has been ripped open. Perhaps the trompe l’oeil is meant as a joke, albeit a bad one, as if the smoker was so desperate that he could wait no longer.


Surreality and dubious humour are not new to tobacco marketing: legislation forces much cigarette advertising to be oblique, such as the “scene setting” of Marlboro ads. Carrolls’ approach is less sophisticated.

The packaging has also changed. This is a pity, as the old Carrolls Number1 box was almost a design classic, using sans-serif lettering, semicircles and ovals, and the iconic colours of red and white that appear on brands such as Marlboro and Coca-Cola.

Those colours are still used, but the packet has been rejigged, apparently to appeal to more affluent smokers, by using gold bordering and softening the central panel by making it more of a swirl.

The new typefaces are an incongruous mixture of the playful and the formal. “Carrolls” is rendered as if handwritten, but the joined-up upper case lettering amounts to neither a signature nor a tag. The “Number 1” is in a mongrel calligraphy-script typeface chosen to add to the luxury feel of the new packet, which one might also say has been feminised.

In this sense, the redesign seems to be targeting a particular type of smoker. Consumer anger has prompted much of the industry to leave its packaging alone, lest it be accused of trying to appeal to teenagers or other groups.

As such, Carrolls has scored a double own goal, scrapping a gender-neutral and age-neutral design for one that supposedly, but badly, appeals to affluent women.

I couldn’t find a photo of the packaging they were referring to but this is what I think the current version looks like: 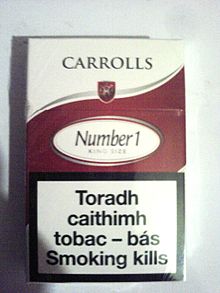