Stylus for Sketchbook on iPod Touch 4

Which stylus pen, if any, do you recommend to work with Sketchbook Pro on an iPod Touch 4th Gen?

Pogo Stylus for iPhone and iPod touch. Type quickly, even with gloves!

its kind of different on the iphone, cause the tip is a kind of foam sphere, so it takes a bit to get used to. but spencer uses it on his ipad over at sketch-a-day.com with awesome results
http://www.sketch-a-day.com/posts/sketch-a-day-177-off-roader/

I did a couple of youtube searches and some people really like the targus stylus (its also rebranded as other brands). Apparently its a bit different, but more accurate to play with.

My question is wondering whether Apple will support a 3rd party with a touch-sensitive version. I doubt Apple would ever release a stylus (with Steve’s quotes on styluses and failure), but the proof of concepts work - I wonder if they’ll be released sooner rather than later.

I bought one of these on my last trip to HK. Works great with Sketchbook on my iPad.

I’ve tried the foam styluses and didn’t much like working with them as the nibs are still too big. Just came across this one though: ostylus.com

As you can see what you’re doing it might be a lot nicer to work with.

I got these because they were so cheap, I figured it couldn’t hurt. They are terrible. They have rubber tips so they stick and drag. They’re great for picking apps and typing but not drawing.

I’ve been pretty frustrated with sketchbook mobile. I really haven’t been able to get the hang of it probably because my finger and bad stylus aren’t getting the job done. Any tips?

looks inspired by the 2nd from the last clay tool here!

OK I went and got two kinds to try out. One is the Pogo Sketch and the other is a more expensive Elago.

The Pogo Sketch has a foam-like tip that doesn’t feel like it’ll hold up over time and changes shape. It is less responsive and requires more pressure when compared to the Elago.

From these two, I like the Elago much better. Feels more responsive and less fragile. The tip is not a foamy material and keeps its shape. Glides well and is consistantly responsive requiring less pressure on the glass of my ipod touch.

Sketching on a ipod is just too small so I think I may give up doing this on a small screen device until I get an iPad later on.

I am going to buy one too, as winter is coming. And find something interesting, some korean use sausage as stylus! lol 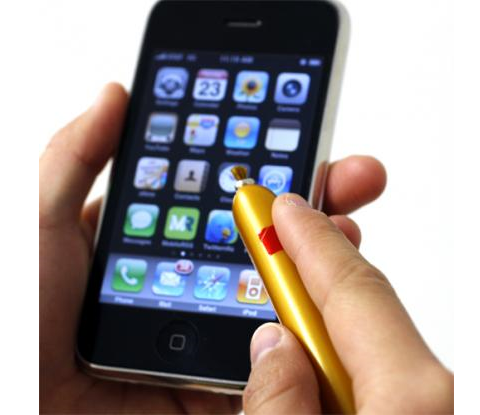