Here are some images from my university major project. I am a final year ID student at Loughborough in the UK.

Loki is a two part shoe featuring a removable elastomer exo-skeleton and a soft inner bootie which can be worn independantly as a slipper indoors. The inner is reversible, allowing the wearer to change the colour and appearance of their shoes.

I modelled the shoe in ProEngineer, had Rapid Prototypes made which I used to create silicon moulds for vacuum casting in a polyurethane resin to create a flexible and wearable prototype.

I have just cast it in a white and blue colourway as well which I’m really pleased with, i’ll post it too when its cleaned up and assembled

I would really appreciate your thoughts/opinions/feedback/critisicms…

ps. If anyone has a spare couple of minutes to fill out a short questionnaire regarding my shoe I would really appreciate it, heres the link to it 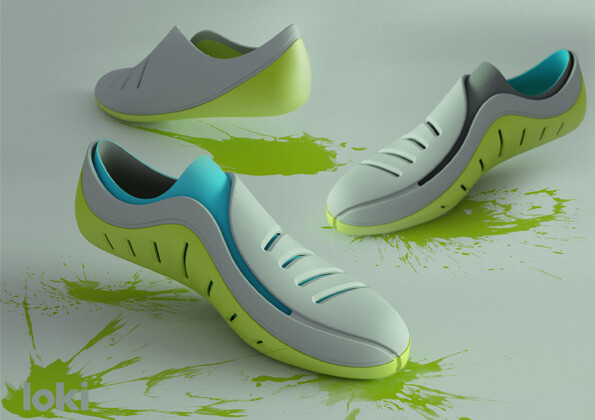 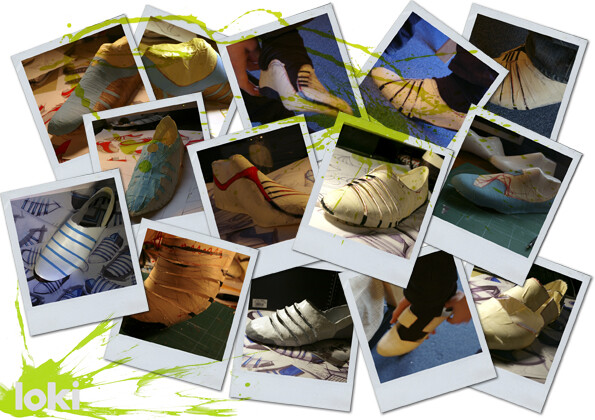 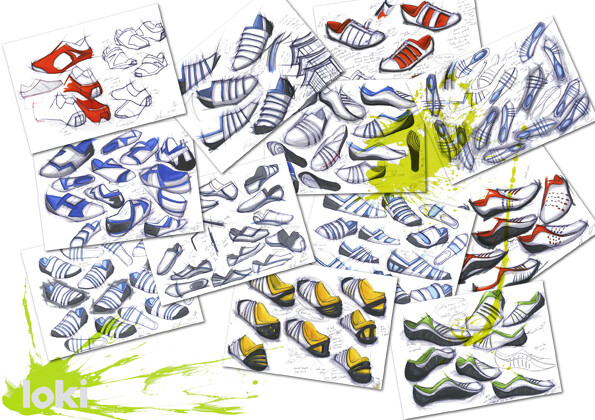 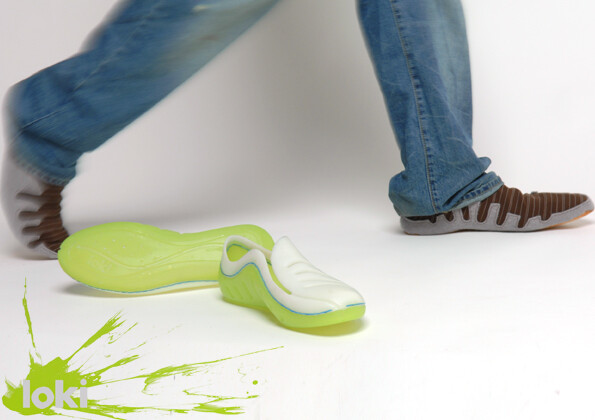 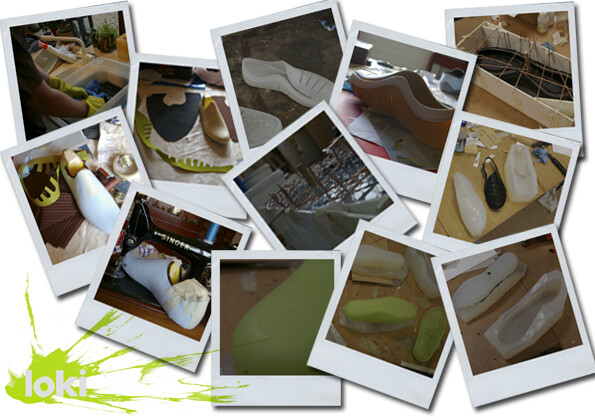 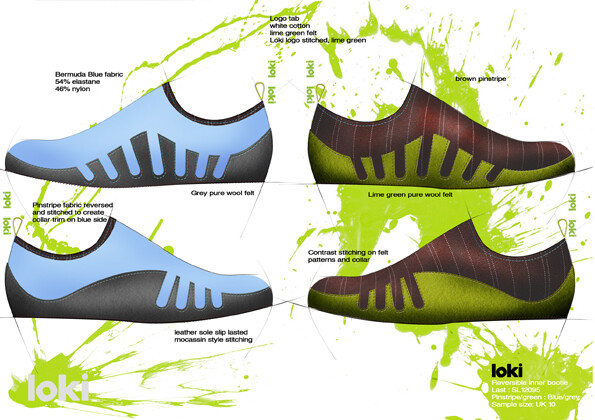 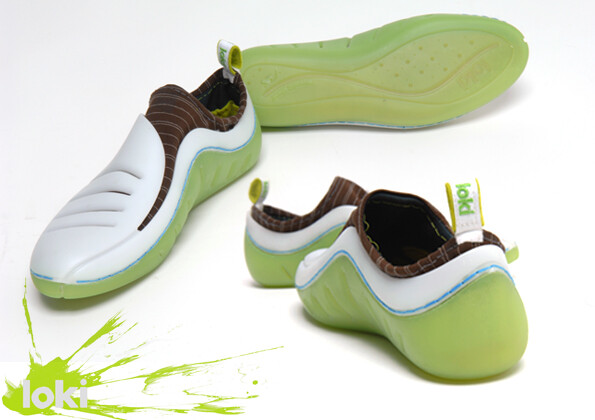 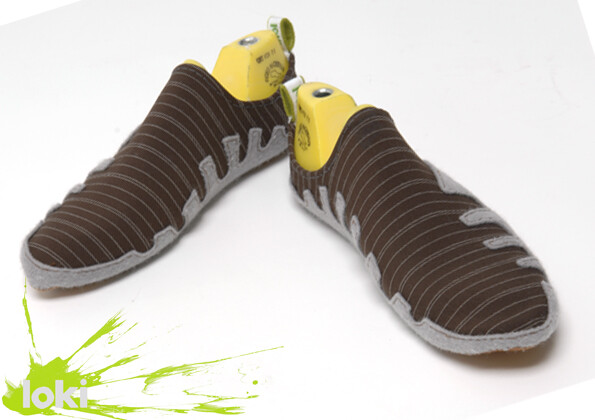 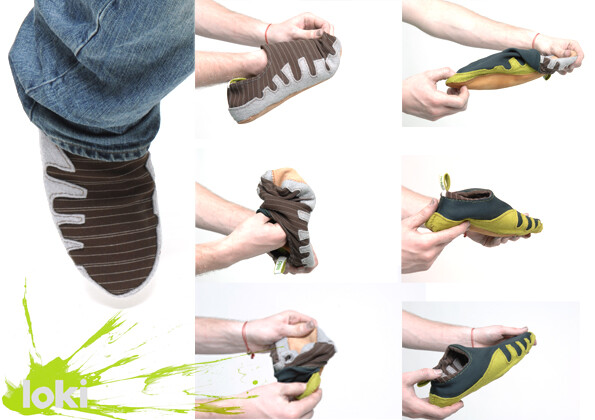 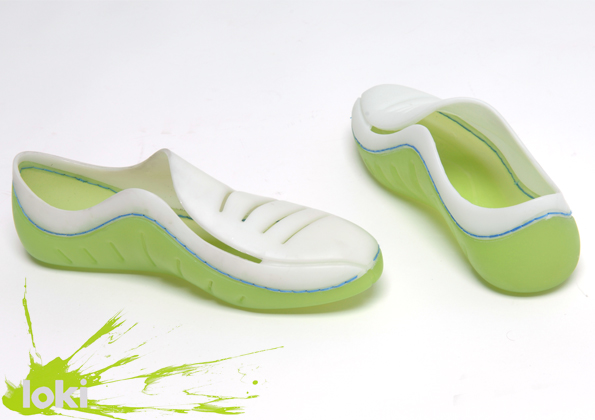 Well i really like the idea personally, i’m definately a slip on man. Looking forward to popping up to the show and seeing Lboro’s stuff this year.

Not the most in depth comment or critique but yeah really liked it, i’m also impressed how you made it, but then i know nothing about shoes.

Love the photos as well, how did the final year go?

are you an ex-loughborough student?
The final year has been really good (touch wood!), lots of late nights though and with a week till this is due in im sure there will be some more!

It will be updated with some examples/preview of students work and other information very soon. Oh and move your cursor over the image on the website its fun!

I’m on placement at the mo, finalist next year! best of luck with the submission and degree show.

nice, but do you have any photos of the Lateral side of the shoe? it seems like all the shots are of the medial…

sorry yo that was an oversight, here are a couple… 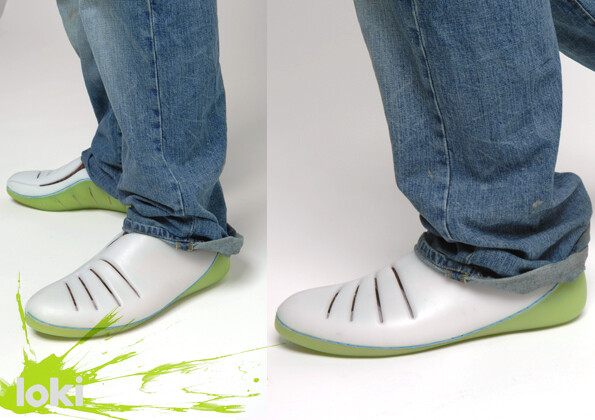 nice, i like. really dig the modern style and the colors/detailing looks great too. very interesting to also hear about your RP/casting process to make the prototype. would love to see more pics of the process…

only thing i wonder about is the practicality of the design. I would think the TPU exoskeleton would get pretty hot on the foot, and not sure about how it would flex/wrinkle. I can see you’ve got some slits on the front which is a good way to address the issue, but wonder if less solid approach would be more appropriate and also show the inner bootie better. sorta like the marc newson shoe which is very similar in construction. 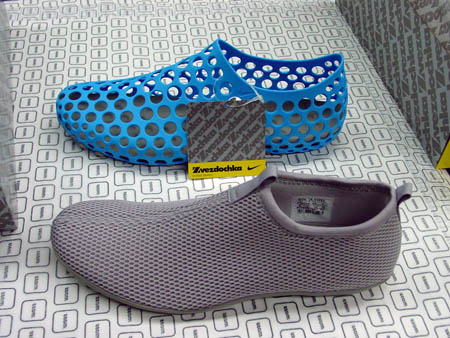 Funny, that’s the only thing I don’t like about it. At first I was thinking that the blue was a leftover marking from the modelmaking process. I liked the cad rendering where it’s more of a pronounced parting line gap there, perhaps the stitching would stay white like the upper or match the green and rest inside the “valley” of that parting line.

Then again, I’ve always been into the more subtle details and color schemes so take that as you may.

Thanks for the feedback Richard, its much appreciated

As you pointed out the flex of the material is an important issue and that is why there are those slits to help the shoe flex. These and the slits through the medial side are an attempt to allow some ventilation as well as to show the inner bootie colour through.

My first castings used a much softer PU, it didnt support the foot or hold it in at all, it was pretty much like a jelly shoe. The final prototype is prehaps a little too stiff, though not uncomfortably so. With a bit more time (and money) I would have liked to investigate the material choice further and played around with this, prehaps using different materials for the upper and sole parts.

Stylistically I wanted the exo-skeleton to feel like it wrapped around your foot, encasing it just like an exo-skeleton. I tried to strike a balance between this and showing through to the inner. It was also important to communicate that the two parts created a hole and that the exo-skeleton is ‘empty’ without the inner

As you suggested it may be better to open up these slits slighty wider which would help flex and ventilation as well as expose the inner more, emphasizing that the exo-skeleton is incomplete without the inner bootie.

I have not worn it for an extended period of time yet but I am planning to conduct some user and fit trials early next week to see how it performs in terms of comfort.

Thanks for your feedback skinny, again much appreciated.

The stitching was left out of the CAD model for time’s sake really. I am assembling a second colourway right now with a blue sole, white upper and lime green stitiching (il get some pictures up of it soon) which I prefer to the one posted above actually. I have another set of mouldings still so its definatly something I can look at.

here are some more images from the vacuum casting process.

First the RPs were produced, these were then primed sanded and finished with a matt paint
Polystyrene boxes were made the size of the moulds (about 15mm bigger in each direction than the part)
Sellotape was stuck in a strip around the top of the parts and marked witha black marker pen. This helps split the mould later. All the slits in the moulds and holes for the thread were also taped over.
1.5mm welding rod was glued at roughly 30mm intervals all around the top edges of the parts. These created air vents to allow bubbles to escape the mould during casting.
The parts were suspended in the boxes using 10mm dowell rod and a cross brace. The rod created the sprue for pouring the PU resin
The silicon for each mould was degased for 20-30minutes in the vacuum chamber before pouring into the box. Each mould weighed around 4kg.
The silicon was left to set for 24hrs on a work bench. Leaving to set at room temp. rather than using an oven allowed any air bubbles to escape.
Moulds were cut apart with a sharp knife, cutting to the sellotape.
Moulds now ready for casting!

This was quite a lengthy proceedure and the moulds needed a little modification before good castings were obtained. Extra air vents were added to the upper moulds with a sharp knife.

here are the blue and white colourway, just finished them. 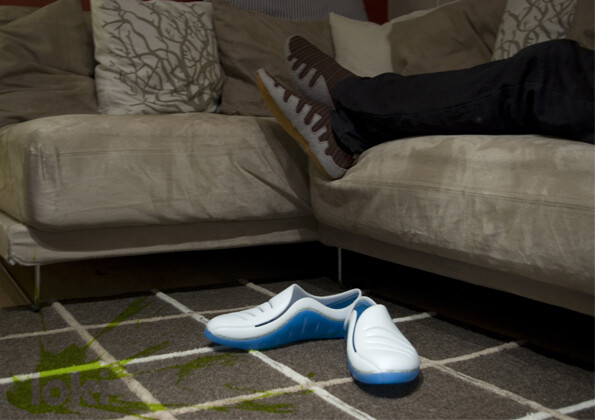 my only question or concern is about the two part system…
in the zvezdochka by nike…i understand switching of bootie in the modular system allows for a dramatic change in appearance due to the porous nature of the shell…
but with your shoe, switching of the inner “sock” doesn’t change the appearance much… i was wondering what the primary function of it was or if you could explain it a little better…

to me, the molded upper, with a moisture wicking lining perhaps would seem to be sufficient enough
anyways great work if u could add some clairty that would be great

The main function of the inner slipper is the ability to remove the exo-skeleton when you are indoors/at work/travelling etc. The secondary concept with the reversible inner is that switching it would alter the appearance of the shoe, prehaps co-ordinate it with your clothing. The thin slit cuts are meant to create stripes of colour whilst the larger throat opening has a larger impact.

However with hindsight, and comments such as yours and richard’s, I think the slit cuts on the exo-skeleton need to be wider than they are presently to reveal more of the inner bootie

Unfortunatly the dark green side of the inner was not my first choice colour, originally I had a bright sky blue, the difference between the two states was more marked then. It was in the same material but it was a little thicker and proved too thick for the allowance I had inside the exo-skeleton, as the materials were remnants from the fabric shop I had to use what I had available.

As for the footy, I was juggling a ball in my living room earlier and they do feel pretty nice for it!