Is it just me or it is out of control? They’ve finally found a movie franchise that targets from babies to older adults.
I’ve been seeing so many Star Wars branded products that I’m starting to lose interest/hate the movie…and it’s not even out yet.

I could do without seeing movie characters on my coffee creamer & who would buy Stride Rite adult sized star wars shoes?
I wonder how designers feel having to do so many star wars branded products.
Can wait til my grocery store carries Storm Pooper toilet paper…

Imagine working on all this stuff. Dream projects that spiral outta control.

There’s a fine line between inspired by and costume world. Interpretive vs literal translations. Constant battle between all parties to figure out where the best line is.

As father to 7 and 5 year old boys, I welcome all of this with open arms.

It really always was like this. That’s what made the franchise so damn valuable in the first place. It’s an inherent part of the business around it.
Check this out, the toy sales of Star Wars totally DWARF the actual box office performance. Star Wars Total Franchise Revenue - Statistic Brain

I’m glad I live in the People’s Republic of Canada. I think I miss 95% of this.

Those shoes are horrible.

I understand toys, clothes, maybe cereal. But coffee creamer? And adult shoes that look like toddler shoes? I also saw some vitamins branded with star wars.
I guess the consumerism is what’s bothering me. I wonder how many people are buying them just because of the branding not really knowing anything about it?

I just bought Star Wars yogurt tubes for my kids tonight at Target. Are any of you really surprised by this at all? Remember, it’s a Disney movie now.

I understand kids foods and snacks. I even bought my wife a few star wars items a couple of years ago. But coffee creamer? It bothers me. How about this: 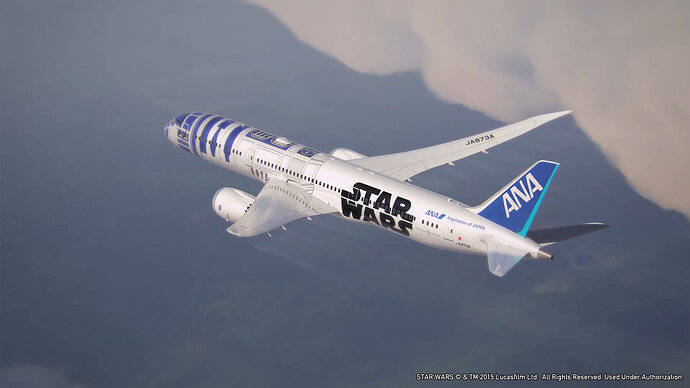 Star Wars is the most universally loved pop culture icon now. It’s inevitable. The other shoe will drop eventually though.

Disney will be able to (over) kill that one, as well. No problem with me. Never liked that white vs. black simplicity. Never telt right at home in postwar Europe. 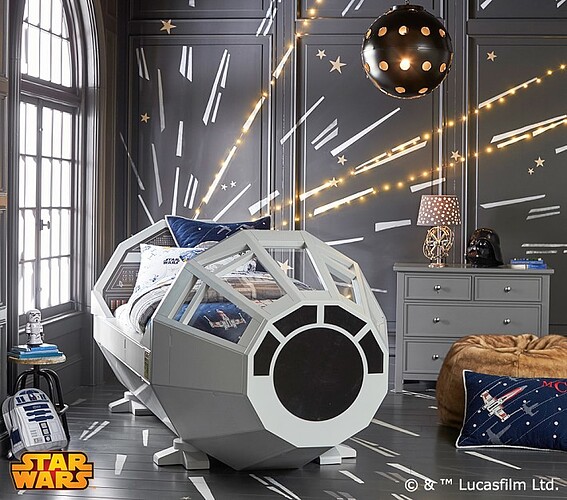 Yeah, my wife and I saw that on the catalog, but we would need a really big room for the kids + expensive.
These products don’t bother me. I actually really like them. They are tastefully done and they target kids. Well, probably the parents of the kids, but the product is for the kids.
This morning I realized my wife had bought a set of star wars mugs a couple months ago for my birthday. I already have my boba fett branded coffeemate. Now I just need to get some Mocha Java the Hut coffee to start my epic morning. 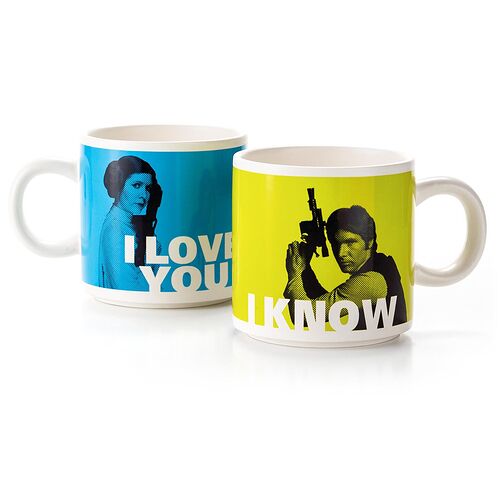 The bed is awesome, the mugs are great. As with any of these kinds of things, there is going to be good and bad (those shoes…) but eventually people vote with their dollars and it runs its course.

Luke:
Ben! Why didn’t you tell me? You told me that Darth Vader betrayed and murdered my father.

Obi-Wan:
Your father… was seduced by the Dark Side of the Force. He ceased to be the Jedi Anakin Skywalker and “became” the Sith Darth Vader. When that happened, the good man who was your father was destroyed. So, what I told you was true… from a certain point of view.

Luke:
A certain point of view?

Obi-Wan:
Luke, you’re going to find that many of the truths we cling to depend greatly on our own point of view.

Its hard to not be cynical about the level of consumerism and merchandising using the Star Wars ‘brand’.

By way of contrast, I’ve been learning more about what is considered part of the Star Wars ‘Canon’, and what is outside of that, and therefore not ‘officially’ recognized. There is now an entity called LucasFilm Story Group, “a committee whose job is to keep track of and define the “canon” in an effort to unify the films, comics, and other media with the existing canon”.

There are gobs of opportunities for Disney etc. to make piles of money, without doing coffee creamer. The brand design side of me would appreciate a similar ‘canon’ for licensed merchandise that could add a dimension to the stories, be similar to movie/canon actual products, or be part of some new branch of continuity that enhances the story. Mos Eisley Cantina coffee creamer complete with authentic-ish serving utensils and a mug that says “I’VE GOT A DEATH SENTENCE IN TWELVE SYSTEMS!”

Wow, that commercial just made me cringe. It’s almost like seeing everybody wear your favorite sneakers or listening to your favorite song. I think it’s gone beyond mainstream.
“Marketing is the path to the dark side…marketing leads to sales…sales leads to profits…profits lead to suffering (more crappy marketing & products).”

That commercial…wow. Im having a hard time which is worse, the products or the gratuitous use of lens flare. I wasnt sure if I was watching star wars or JJ abrams Star Trek.

I’ve got to get those mugs!! Seriously!