Saw this on Design Observer:

It’s being pushed as being designed by ex-apple and ex-frog designers. The tone of the Design Observer blog post is that this is a great product. Or, at the very least great design.

I have to ask, why would you push the idea that it took a team of “great designers” 3 years to design a water bottle and the main take away is that it won’t roll away? Isn’t it exactly this shit that devalues our profession?

This is why Kickstarter has banned renderings…

The general public sees a design concept rendered well and assume it must also work well and be already in production.

IP: I was thinking all week about the crappy tweets I see from design organizations (I follow quite a few). Crap like, “Good design IS good business” and “It’s all about experience!” Many blogs are equally trite. If I didn’t know better, I would assume that design was a dying industry that has no where left to go.

There are so many real problems out there. Crappy products that are ugly, poorly made and hard to use. Plus, I wouldn’t hire someone that couldn’t get that water bottle to market in over 6 months. It’s a few injection molded pieces and an extrusion (it looks like). Maybe 60 days tooling, 15 days in CAD, 15 days prototyping and QC, 30 days transport and 30 days for a buffer. Graphic design and marketing materials can be created in parallel.

Maybe we need to start a disgruntled designers group…

That thing looks way over engineered… ironically it’s also what makes it so much harder to clean than it could’ve been… and they seem proud of it:

PRECISION ENGINEERING
The Square is designed from 16 different parts and requires 65 separate steps to manufacture.

Oh and, I wonder what happened to his former adventure?

PS. GOD I hate this US version of Dragon’s Den. What’s with the background jingles and intense editing?! Stop.

Should work well with round cup holders, amirite?

This reminds me of the Kor water bottle that Eastman was pushing a few years ago at the IDSA conferences.

It was an aesthetically pleasing piece of sh*t.

They used plastic that was so soft it made a horrible noise when you opened it, it was made using a bunch of co-molded pieces of plastic which probably killed any ability to recycle it, it was difficult to clean and so complex it made you wonder “what problem were you trying to solve, other than peddling some new plastics?”. And they all had an awkward tolerance where the lines of the top and bottom would never actually line up, and it wouldn’t fit in most cup holders due to the size.

I have a whole load of water bottles. Most of them have 2 or 3 pieces at the most, and they work just fine. It’s kind of morbid at a design level when you lose such track of an actual problem that you go and create landfill like that.

Hadn’t someone on here posted a
Square coke bottle as one way packaging?

That was clever as it increases density in
the whole transport chain. The multi use
aluminium “bottle” I don’t understand.

This is all it takes to clean a bottle: 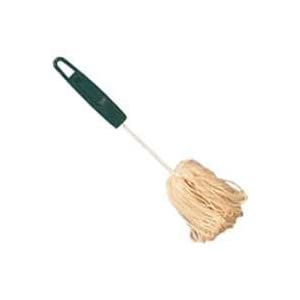 I wouldn’t call this over-engineered, I’d call it bad design. All those little nooks and crannies are going to hold dirt and require a toothbrush to clean out adequately. Either this guy was hosed by some bad designers, or the designers were held back by bad design brief. Someone failed.

To be fair, you could make some big ass ice cubes, but then how out of the bottle would they come?

I’ve always thought those dual-openings on waterbottles were a useless gimmick. This one is extra bad, because the cleaning aperture is still circular, leaving a big ledge. Shame they devoted so much engineering effort towards it.

That said… It looks hot and I want one. I prefer metal bottles, and my beat-up kleen kanteen looks a little out of place on a conference table.

I’ve always thought those dual-openings on waterbottles were a useless gimmick. This one is extra bad, because the cleaning aperture is still circular, leaving a big ledge. Shame they devoted so much engineering effort towards it.

That said… It looks hot and I want one. I prefer metal bottles, and my beat-up kleen kanteen looks a little out of place on a conference table.

I’ve always thought they were a useless gimmick followed shortly by “I want one”.