Didn’t know whether to post this in the Transportation section, the Furniture Section, or the Project Section.

You may recall this project, it was posted on Core in 2007 at the beginning of the project; NC State ID student Joe Harmon’s graduate project was initially inspired by WWII era all-wood aircraft like the de Havilland Mosquito. Keep in mind, North Carolina is a furniture center in the United States.

“Three years ago, Joe Harmon, a twenty-eight-year-old industrial design graduate student at North Carolina State University, thought it would be instructive to make a wood supercar for his master’s thesis, including some of the running gear and-unlike the Marcos - all of the bodywork. ‘I wanted to show that wood isn’t an antiquated, low-technology material,’ Harmon says. – The transverse leaf springs are formed of osage orange wood. Even the tie rods are hickory. There is extensive use of plywood, as in the suspension control arms, but every square inch was laid and press-laminated in-house, including the impressive spiders for the composite nineteen- and twenty-inch wheels. – To get heat away from the wooden structure, he has swapped the cylinder heads left to right so the exhaust ports are inboard, with the headers coming out the top of the engine below huge vents.” - Automobile, December 2008

If you notice a resemblance of some of the molded body components on the vehicle to “carbon fiber”, realize that the material is actually woven wood (made in his shop on an old loom). 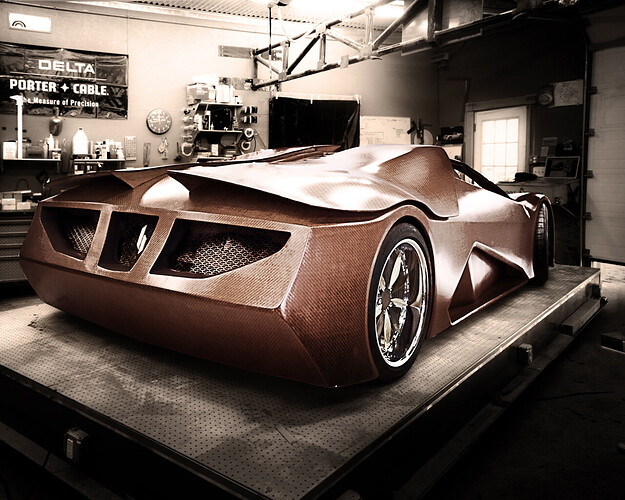 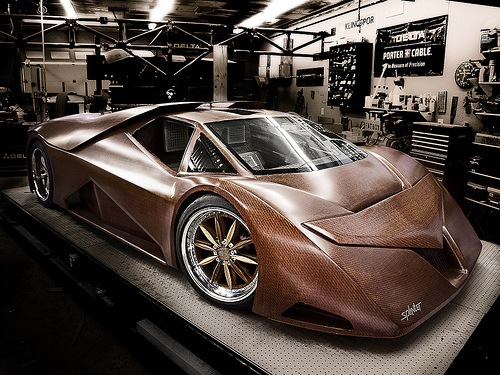 I saw this in person a couple months ago (it’s kept at a CFD consultancy in Charlotte where the guy works). Really, really cool. The woven wood composite is a particularly great idea.

cool idea. too bad the design looks like a terrible fake labmo kit designed for a lowered civic or something. I would have like to see the design take more advantage of the unique properties of the material. imagine showing the beauty of the grain, or have panels of awesome rosewood veneer, or even laser etched or carved detailing, with panel connections using cabinet joinery.

this unfortunately just looks like a wannabe supercar with a poorly done sticker of brown carbon fibre on it.

cool idea. too bad the design looks like a terrible fake labmo kit designed for a lowered civic or something

To me it looks more like the ford GT90 concept. 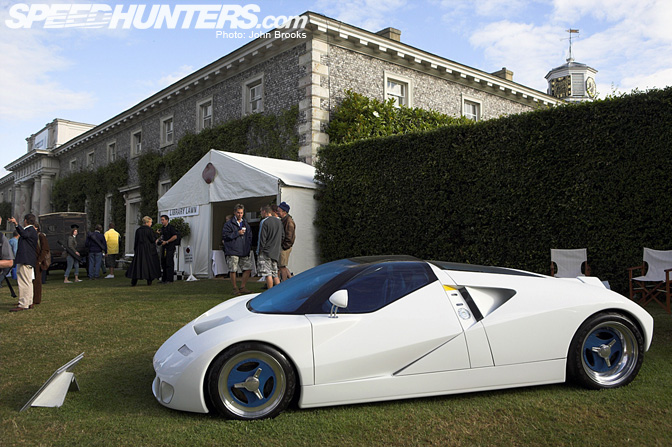 they did all that to make the point that wood is a still competitive with metal for many uses… that’s a hell of a grad thesis project. As far as the styling, I think its impressive, but some of the detail seems strange - woven wooden seats? Seems out of place with a sleek supercar exterior and is something you’d never see on a s3xy italian wooden speedboat. As far as looking like it has a faux wooden exterior, I bet it’s something from the photos… my guess is that in person, when you could touch it and feel that it’s wood, it would be awesome. I’d like to see it driving too…

cool idea. too bad the design looks like a terrible fake labmo kit designed for a lowered civic or something

To me it looks more like the ford GT90 concept.

Sorry. You are right. I didn’t read the whole OP so didn’t realize it was a student project. For that it’s an amazing amount of work so I could how with all the engineering and build there might have not been as much time perhaps for styling exploration.

An amazing project from a construction standpoint, but the design looks unrefined… it does look like the GT90, except the GT90 is awesome. Look how short, yet resolved the front overhang is on the GT90… look how long and awkward the front of the splinter is… the “Decepticon eyebrow” isn’t helping it either.

If you are going to spend a year building something, spend a week really working out the design. It the design equivalent of measure twice, cut once.

the “Decepticon eyebrow” isn’t helping it either.

maybe even a Decepticon unibrow

I just noticed there don’t seem to be headlights

This is a pretty cool project, but I’m not to sure about its purpose. I guess it shows that wood can be used in that type of application, but is it really practical or cost effective for anything other than a one off project? There’s a reason why airplanes and cars are no longer made of wood, it takes a lot of time and labor.

Oh and one more thing I hope no one in their right mind thinks that this thing is a “green” car because its made of wood.