Is or has anybody used Space Claim? It’s a “direct modeler” a sales rep showed it to me and hooked it up with a trail version. So far the nicest thing about it is that you can open just about anything in there and mess with it. The way you build things is a little rudimentary but maybe for some that is good. I heard people saying that it will allow users to build things that cannot be manufactured, where as solidworks tends to freak out if you are going down that road. Do any firms or freelancers use this for modeling? If so how do you like it when compared to Autodesk (inventor) or Solidworks?

Tools still (for now) need a brain behind them.

You are right about that. But to the larger question, does anybody use it? I feel like it is a bit like FormZ, it’s something you have heard of but you don’t really know anybody who uses it. (Karim Rashid is the only person who comes to mind with I hear FormZ).

I’ll take it at face value that this isn’t just a trolling and say that there is no one best software and everyone across the board will agree to that.

That said, why would you want to be able to build something that’s not manufacturable? Then it’s just art in the computer rather than being a usable product in the real world. You want something to “play” with then try Rhino, Modo, Zbrush as those are programs that you can use to just ‘mess around in’.

Direct editing is nothing new. SpaceClaim is above Sketch up, but it below Inventor, Solidedge, and Solidworks in the BIG picture of what the program can do. it’s absolutely amazing that you can just bring in a good 3D data set and just start working on it, but do not think that having no history is this be all end all that a sale rep is trying to sell you on.

As Asango said, ALL of these tools still need a brain behind it otherwise anyone would be able to do YOUR job.

Thank for the reply, I’m not trolling. For work we are looking at it to use with a STEM education package for a DARPA MENTOR contract we have. The advantage is that it can open whatever, and it is cheap. I’m not going to Okay something that nobody uses, as it would be pointless to learn a package that nobody uses in the real world.
I have no intent to make things that are impossible to manufacture.

If you want to “open” anything, ALL of the packages can do that. Solidedge, Inventor, Solidworks, Creo, Space Claim. If making changes is your only criteria, then your using the incorrect ruler. Imagine you want to bring in an .stl, .3DS, .OBJ, .VRML file, NONE of these programs handle that with any type of grace. Then your up the creek with no paddle because you can’t make the changes to that data set. Point being that 3D data right now needs a multi-tiered. All of these companies have to get over that there will no longer be a #1, there will just be their portion of the pie.

So if the plan is to not make something that is not manufacturable why harp on the notion that any of these packages would “choke” on a design creation? Because the sales person said so…yeah cuz his/her interest are to tell the actual truth. There isn’t anything that, and this is with in the realm of manufacturing, that any of these CAD packages can’t make. So now start asking yourself about resources? If we hire someone new what are they going to “know” how to use? What are kind of tutorial videos, blogs, and community is available.

One of the best sites that has come along is www.grabcad.com. They support all of the 3D packages. Start taking a look around there, in their forums and see what kind of files people are uploading.

Importing stl files to the space claim demo I have been playing with works alright. As a side note.

Not saying that there will be much need for you to have to work with .stl data, but there’s a big difference between working with real scanned data and converting it to something needed for a CAD package. Can it be converted from a mesh to something that’s really usable? Both of these videos are showing VERY prismatic models being turned in native geometry. This is SO easy, this is no way representative of any real world problem when it comes to .stl files. A part like this shown in the video would probably be faster to just have measured it rather than have scanned it, cleaned it up, import it, then reverse engineer it. 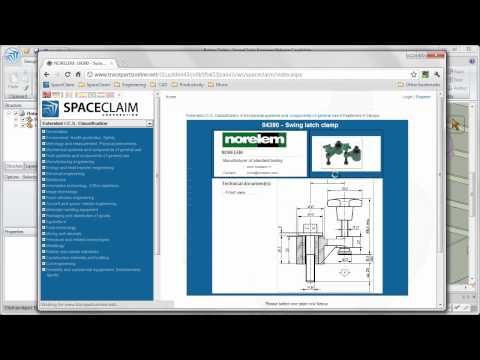 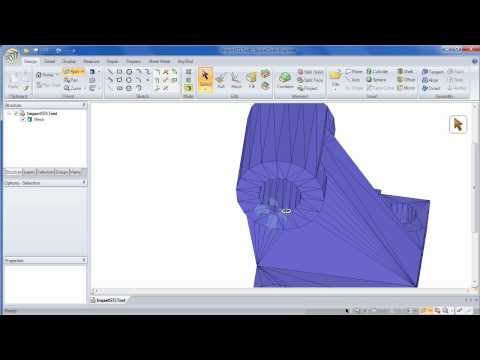 This is how ALL of these packages would handle the conversion. None of these is, for instance, Geomagic, Polyworks, or Rapidform that are truly built for heavy scanned data and translating it.