sometimes it's the small innovations

Not every advance in technology aims to change the world, some just get the top off faster…those Italians. 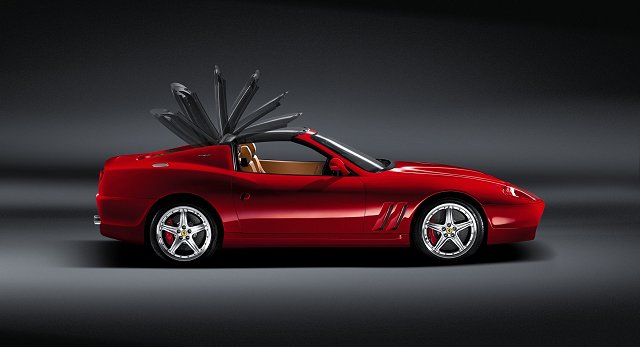 Don’t you just love the Italian language? Take Ferrari’s new limited edition Superamerica: its roof has been dubbed “Revocromico”, illustrating the fact that it rotates and it uses electrochromic technology: simple, but it just sounds so good.

You may recognise the cool rotating electric roof from Fioravanti’s Alfa Romeo Vola concept at the 2001 Geneva Motor Show, and indeed Fioravanti owns the patent. In exactly 10 seconds, the roof rotates from open to closed, nestling on the modified rear bodywork. The rear window simply rotates through 180 degrees to provide a useful wind deflector, which is just as well with the Superamerica’s 200mph capability…

The Superamerica is fitted with the sonorous V12, putting out 540 Italian horses. Customers can choose between manual or F1 (paddle change) gearboxes and can even fit the superb GTC Handling pack, which includes Ferrari’s carbon ceramic brakes. Not a bad specification for an open-topped car, though you should think of the Superamerica as more of a targa-top than a true convertible.

As well as a stylish and practical opening technique, the electrochromic aspect of the roof allows the passengers to choose the level of light entering the cabin, with five different tint levels, presumably titled in Italian, from “Show Off” to “Shy Celebrity”…

Ferrari will reveal the Superamerica at the 2005 Detroit Motor Show.

Very elegant. I always thought that the Targa was the best mix of a hardtop and a convertible…and this seems to have the method down perfectly. I’d like to see this technology trickle down to affordable cars, though.