Someone thought this was a good idea...

These ads have been around for years, but I’m shocked every time I see them.

The ad copy is like a face palm on repeat.

Will G-Defy be banned from athletic competition? Should they be considered as unfair advantage? We don’t know, all we can tell you is that this new technology in footwear will take your performance to the next level.

Slick seed of life logo because its cool… 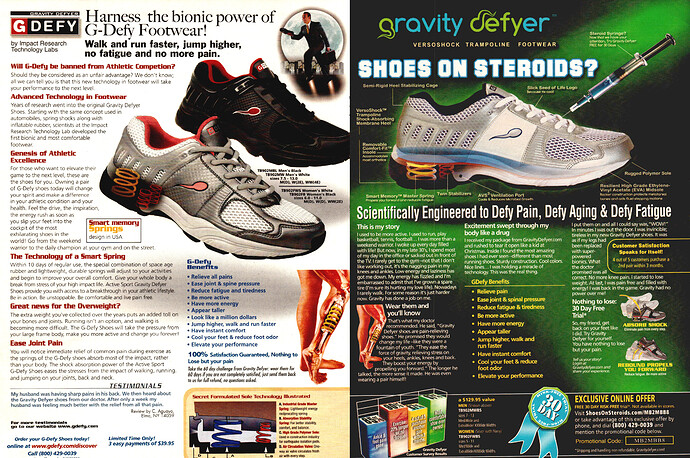 Slick seed of life logo because its cool…

LOL, this is hilarious

I am sure those marketing people had a laugh or two as well.

And what works as a bluetooth speaker maybe works as a logo as well, who knows?

Circulates fresh air with every step!

This is all so bad that it actually hurts my feelings.

LOL, I hear you. So odd. Who is the target consumer? Older folks who are sedentary looking to “take their athletic performance to a new level”?

I think the back of a magazine, terrible infomercial copy may actually appeal to a very specific demographic at the low end of the bell curve.

Just when I thought it couldn’t get any better, I saw it.
“Slick Seed of Life Logo”

That blew my mind too. I mean, was the idea to make this ad read as satire? If so, they didn’t even do that right. This thing is such a disaster, on so many levels, I honestly am having a hard time thinking of something worse.

But then again, here we are all discussing it, so maybe mission accomplished???

“…gravity had no power over me.”

These ads have been around for years, but I’m shocked every time I see them.

To paraphrase Mencken, no one ever went broke underestimating the intelligence of the American public.

To paraphrase Mencken, no one ever went broke underestimating the intelligence of the American public.

I think PT Barnum beat Mencken to that one.

These ads are the graphic design equivalent of the emails I keep getting about receiving gold from a Nigerian prince. Most people won’t bite, but someone somewhere will, despite all of the ridiculous claims.

For me, the force is not attractive.