some of my old stuff

This coffee table was constructed of a hollow steel pyramid that had its surface roughly abraded with a disk grinder and then coated in clear polyurethane. The top is 1 Â¼ inch Lexan. The effect explored was to give the illusion of no support using the old puppeteerâ€™s trick of black wires. The high tensile steel wires are black coated and in tension making the table top very ridged in pitch but retained an odd but nice feature in that it would â€œgiveâ€ and pivot on its point a slight amount. This â€œdodgeâ€ prevented one from a bruise when knocking a knee against it. The Lexan edge also picked up and fiber optically distributed ambient or mood lighting so it would glow. This effect I used for some evening parties where I would set up a laser pointer across the room aimed at an edge, the edge of the table would glow red or green unless a person walked or stood in its way causing the table edge to go clear. This confounded many people and provided a nice conversation piece. 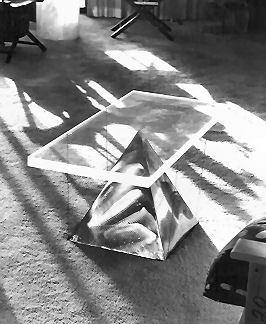 This end table was built of powder coated bent steel tubing with the table top of 2 way mirror. Under the mirrored top as can be see was a light source with a light diffuser made of blackened aluminum foil that was crunched up and punched with large holes. The effect when the light off was a mirrored top however when the light was on was a star field appeared below the top with a number of point light sources that appeared on the ceilings and walls. The point light sources could also be used to illuminate such objects as the crystal candle holder as in the picture. The table also gave wonderful low level mood lighting. The combination of lighting and furniture is not new but when done this way offered much In the way of added emotional impact. 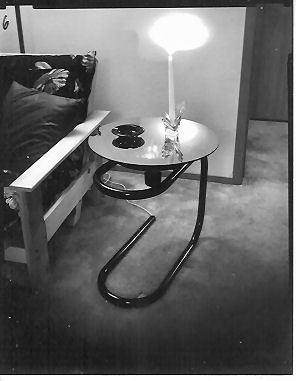 This is a sofa table version of the end table, exploring the asymmetrical layout and shows the area below the glass tops clearly. 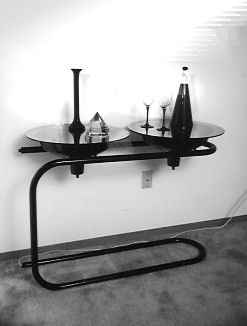 This next piece also used internal integral lighting to provide for mood enhancement. The base of the table was just roughly sanded Lexan sheet pulled into a tear drop shape and held together by a spine. Inside the table base was a loosely draped string of white Christmas lights suspended from a cantilevered spring rod. The effect when turned on was that there were hundreds of softly illuminate point light sources that would at times move due the cantilever spring supporting it reacting to vibrations. The total light amount was sufficient to form a very intimate space even in what was an open plan form living room. The table top was of diamond point slate, a rough slate with mica and iron pyrites flecks in it giving it a nice natural contrast. 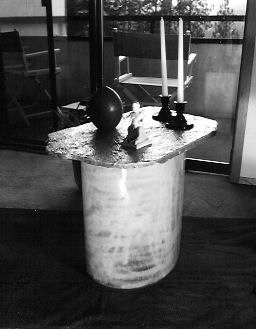 yup, been thininking that clad in wound rope like you see on old yachts might be intresting or clad in wood. I still like the aysemtical design and the stuff was great in that you didnt need table lights cluttering up your space.

i can’t see the images here at work, i’ll look at them over the weekend at home.

the tubilar tables would be interesting as sofa laptop stations. the cantilever would fit easily under sofas and residential seating.

the downside to tubing is the perceived value of it.

the tubilar tables would be interesting as sofa laptop stations. the cantilever would fit easily under sofas and residential seating.

the downside to tubing is the perceived value of it.

Yup, hidden in milled wood it then becomes percived as uber expensive…silly wabbits.