There was a thread on core sometime back about doing this real comparison of software packages. Ive always said Soldiworks lacks in so many areas. Now that SW2010 is out it seams many of my issues have been addressed. Maybe those SW program managers have been listening to our rants. Actually I know they have.

Wednesday, June 30 IDSA Chicago is planning an 2+ hour event at Design Engine where we will proceed to model the same products simultaneously on two separate over head projectors using Solidworks and Pro/ENGINEER. Using the latest versions of both Solidworks and Pro/ENGINEER we will model a Whirlpool refrigerator door pull opening up the floor for discussions. Then we will make 20 modifications too the geometry trying to make those modifications all in 10 minutes. Afterwards we will manage a group discussion of technique… differences… simulates. This discussion will segway into the second half of the discussion by modeling functionality differences with examples. This should be a heated debate and fun all at the same time. All are welcome.

We should web cam this but were not.

Can you post a re-cap of your findings after the big event?

I suspect we will take pictures and post an article of the findings. We will even interview folks to see if their opinions have changed… if their individual workflow might have changed?

Got any good questions for us to ask everyone?

I’ll see if I can’t come up with some… I’m sure someone will chime in here, too.

That’s awesome. How are you going make sure this is really even? What if one of them is better at Solidworks than the other is at Pro/E?

Good point… Who are the two individuals doing the modeling? Could you give us names and credentials?

Have 1 guy in there running Alias.

It’s all fun and games until one guy crashes.

Running Solidworks:
I am thinking of doing the solidworks actually. The point I hope too make or the idea to get across is that there are so many solidworks fans out there that don’t really know solidoworks (or they love sw for improper reasons as noted in many Pro/E vs SW threads in the past here on core talk board) And I’m going to share a workflow and workaround techniques that should prove impressive and interesting to industrial designers… The same techniques in both packages.

As for Pro/E: I have several ID professionals that are students that week that will be in from Karcher in Colorado. One of them will run Pro/E.

The Challenge: There will be some professional SW folks and people from Solidworks sales groups etc in the audience. We thought it would be interesting for everyone if we make it so that anyone from the audience can come up and grab the mouse from my hand. I doubt anyone will.

Neither package will be made too look bad and the whole event will be positive and techniques oriented.

Maybe it’s included, but I would really like to see part of the shootout deal with surfacing challenges between ProE and SW too… the Scott Wilson’s swingline comparison about 10 yrs ago really helped me understand surfacing in Pro. Come to think of it, the models were available for download as a well, which really helped by stepping through the construction

I was the one running Pro/E then for that event and that Pro/E ACCO stapler was my model. i did a search for ‘battle of the bands proe’ in goggle and found this http://www.design-engine.com/battleofthebands.htm

We should web cam this but were not.

It would be great to see. Maybe you could record the screens and put them on Youtube.

we will look into the web cam. We will have to do two since we plan to do both at the same time.

Does solidworks have any equivalent to ISDX or top down design? If I was a betting man, I think my money’s on pro/e. Wait, I am a betting man.

I was the one running Pro/E then for that event and that Pro/E ACCO stapler was my model. i did a search for ‘battle of the bands proe’ in goggle and found this http://www.design-engine.com/battleofthebands.htm

Sorry, I didn’t mean to say he did the model, just the original design (I believe)… great work for that by the way, that particular model really helped me

Then, a few aspects which interests me personally:

*I’m asking this question out of personal bias, of course, in that I think Solidworks caters quite well to designers, but I bet Pro/E have better functions for engineers, so I bet Pro/E will come out winning. I’m still fairly certain which tool I’d enjoy more to use, though, which is something which cannot be measured by a stopwatch.

Hey, I just checked that link - Emmit’s is a great place - used to be my favorite watering hole during my single years. And prominently featured in a certain major motion picture. Another plus for the West Loop in the Chicago discussion.

Pro/E has direct editing of its base features like extrude and revolve. Pull the handle and watch your rectangle grow in one direction or the other type of thing.

But the big thing it’s got now is direct surface editing of the UV flow lines. A very powerful tool in the hands of a skilled user. This is contained in the ISDX module. Also very easy to create C2 continuities. How does solidworks handle this type of thing?

Pro/E, in my humblest opinion, has got the goods for complex surfacing, but not apparently Class A. Can you provide some further information about SW’ s designer-friendliness?

Now, I’m usually of the opinion that hokey religions & ancient weapons are no match for a good blaster at your side. But whenever I’m in doubt, I always come back to a certain feature called variable section sweep. This is where the world of designer & engineer get blurred. I guess this is similar to a loft? The real deal is combining it with what’s called the trajpar relation, for mathematically controlling shape & parametric connections. Amazing results.

But the big thing it’s got now is direct surface editing of the UV flow lines. A very powerful tool in the hands of a skilled user. This is contained in the ISDX module. Also very easy to create C2 continuities. How does solidworks handle this type of thing? 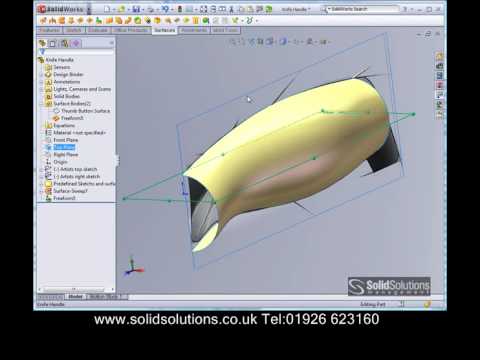 We will be pushing the Surface Edit - internal CV of the surface editing - Free Form functionality in both programs the night before.

I invited several from both Soldworks and PTC however only PTC AE’s confirmed.

I pushed the crap out of Solidworks this week to do some impressive modifications like my one week surfacing students might do in Pro/E. There are a few connections that just fall apart and that frustrates the hell out of me. In SW I expect these connections to work and not like Rhino fall apart. That’s frustrating.

Let me explain, that in my experience I have noticed industrial designers want to prove form when developing a product as opposed to simply capture form. I have noticed however many industrial designers are happy to just model a forum (capture form) hence their use of Rhino where they can’t leverage strategic advantage of parametric controls nor participate in an intense study of parent child relationships. If we can leverage parent child relationships then we can make 20 modifications in five minutes like we teach ID’ers in my week long Pro/E surfacing intensive. Hence prove the forum in the light reflections.

My techniques for forcing solidworks to swallow twenty slight modifications in rapid fire all in less than four minutes is giving me a problem in a spot or two. Choking on one part and several of my beziar curves will not maintain their parent child relationships. Chris Thompson from Ohio an ME with significant product design experience will be here at three to sit in my corner running Solidworks and will help me through the issues.

My end goal is to make solidworks look great after so much development over the past three years then share workflow techniques with the crowd. A workflow we teach in our classes. One that I’ve stated on this forum that some may not have discovered yet.

On the Pro/E side I have two of my past surfacing students from Colorado’s Karcher Corporation. Adam is an industrial designer with two plus years on Pro/E surfacing and in his corner he has Vaughn an engineer with significant product design experience also from Karcher. Vaughn is quite good at surfacing and sits on the surfacing technical committee at PTC on Pro/E. Vaughn is maybe more experienced than Adam who has also taken past surfacing courses. http://www.karcher-usa.com/ Karcher works on some interesting surfacing rotomolded products.

In my corner running Solidworks I have Chris Thomson an ME who is driving from Ohio today. He has significant product design experience using both Pro/E and Solidworks. We both have different modeling techniques and he has not seen the Design Engine workflow for proving form in Wildfire by modifying parts in rapid fire, he has looked at our Pro/E parts and we will have an hour before the event to work out our strategy together.

As I learned Pro/E at Design Engine Bart would repeatedly say “You can’t do that in Solidworks”. This was several years ago, however I recall him also saying that a few months ago as I sat in on a surfacing class. I’m looking forward to the “Battle of the CADs”!