Hi all,
is it possible for us to create a mirror on solidworks but not neccesary as geometry?
what I want is to have “always on” mirror like in alias for visual check not for geometry building purpose.

this would be useful for ideation process. its quite trouble some to mirror every time we have a new geometry.

The best way I can think of is to turn on floor reflections (Go to the Display Manager tab, click the “View Scene, Lights, and Camera” button at the top, right click on Scene). I think you need to have RealView graphics on. If the floor isn’t in the right place right click on Scene again and click Edit Scene to edit the floor position. As you can see in the image below the image fades away so it isn’t perfect, but it doesn’t require you to refresh the geometry selection.

If the fade makes that unusable, mirroring components shouldn’t be that time consuming. In a part you can do mirror bodies and keep that feature last in the tree (add your features while rolled back just before it). For assemblies you can do mirror components and press ctrl+A to select everything. 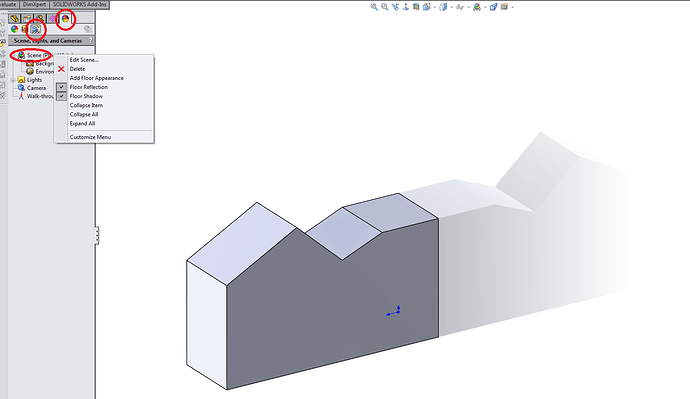 I haven’t tried this, but there might be a way of by inserting a mirrored part in assembly. Create a mirrored part following the second method in this tutorial, then mate them in the assembly and work in edit-part-in-assembly mode. 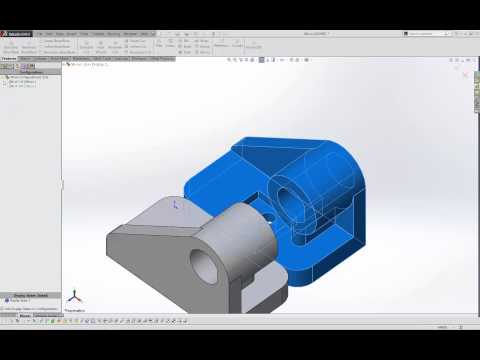 Let us know how it goes!

Engio, that’s a good idea, using the edit-part-in-assembly mode. However, I think it’s easier to just put the part in the assembly and use the “mirror components” command (Insert → Mirror Components or it’s in the drop down with the “Linear Component Pattern” button). I happen to be working on an assembly now in which I’ve mirrored components and I checked to see if the mirrored part updates as I change each feature, and it does successfully.

Two things you’ll want to do though:

That sounds even better, I’ll try to remember that till next time