Hello Mr. Brejcha? I wouldn’t mind visiting your Chicago site one day and trading some SolidWorks surfacing tricks for some questions of my own…mostly regarding Rhino…or err…any other program I haven’t picked up yet…

My name is Marco Serrano…I teach SolidWorks down in Oakbrook Terrace…but I live close to Chicago…let me know if you’re ever interested in trading secrets…although that somehow sounds a lot like espionage for some reason.

build the 2x2 surface, then Build the new curve (3rd), then move it up the history tree so it’s before the surface, then edit the surface feature, adding in the new guide curve. Just make sure all the end points and intersections touch.

not sure what you mean in the second question.

sure anytime. Bring beers tho.


about the thrired curve adition… how do you drob it in when editing the surface? There is no add option. It will not let me click it in there…

Actually, you need to use a loft, not the boundary surface to add in a 3rd curve.
A lot of the SW surfacing tools do similar things…

Wait, you can have more than 2 curves in 1 direction in a boundary surf. Welcome to SW, king of redundant toolsets.

It worked for me this time… humm

Why cant I project a 3d sketch onto surface? Or can I somehow? I am borrowing techniqe from alias studio and trying to apply that technqie to SW… Just pushing it some.

Oh… and for split lines. Should i not be able to take a 3d curve strait to that and force tangency to that? and if not is there a work around like using the convert entities option in sketcher?

The 3d sketches in SW don’t have any implied projection direction to them. That’s why you can’t project them onto a surf. Remember in Alias you have to go to whichever view you want the curve projected in before you do the project command, otherwise the resulting COS gets all weird. I have yet to find a way to assign a project direction in SW using 3d curves. When you use a regular sketch that’s sitting on a plane, SW just projects onto whatever surface normal to the sketch plane.

Sometimes if a 3d sketch has nothing to align to, I project a small straight line that runs over the end of the surface. Then, the 3d curve has something to snap to, and it also has a curve on the surface to align to.

I did your last sentence often on the above model. I call those projected curve ‘curve tools’. I have deemed many words for for specific curve tools that we use in both Alias and Pro/E surfacing exercises. I even go as far as to color those projected curve tools so others can see quickly that they are curve tools.
lattice structures: help users prove form with parametric modelers
stair heights: ‘L’ shaped curves that aid in free form surface manipulations. giving something for the four part boundary to adhere to that is still parametric. Kinda giving the designer something parametric and free form all together. solidworks is not ready for those tools yet i don’t think. next year I hope.

I also segregate projected curves from curves that have not been projected with layers.

I also have a bunch of tools for using Alias geometry as iges files (after the designer is done) so the engineers can quickly capture the model parametrically since they are responsible for modifications before tooling.

On other tools like proe the software will also prompt what plane relative like in alias it depends upon which window makes your projection normal too.

The blue curve has been trimed back (I wanted to use a projected 3d curve) with a projected curve.

I still have one part of my original question not yet answered. Let me try to make it more clear with picture and words. Thanks in advance BTW. I will do my best to pay back to the board anytime I can.

so now my question if you guys are not sick of me yet
what if the underlying layout curve… the ellipse sketch were broken into four quadrants before it is projected. Then I would require some fancy finger work to make my selections when creating that last loft or boundary surface I have been calling scallop. I want to know how to make those selections. Thats what I meant in question #2 … Selection Sets… When selecting curves how do you add to one curve in one direction w/o doing a workaround of changing the underlying curves.

I am prepared to discuss work around but only after I exhaust my efforts.

I have a third question…
3. Alias will display isoparm data where Pro/E does not. Pro/E will display tangency data visual on a surface. Seams SW does not display either. There must be a setting someplace? My work around in Pro/E is to export the geometry to Alias and take a look.

For your hemisphere ellipse question, I’ve had to do just that. Draw a Master Ellipse in one discreet sketch. Then make 4 new sketches that use that copy entities from the Master ellipse. Each of the 4 new sketches should represent a different segment of the ellipse. Then when you build in the surface, you have 4 discreet sketches, all parametric to your original Master Ellipse. In alias you can just do a “detach” command to break up a curve…very handy indeed. But SW you have to do a few more steps. Alos try selecting your curves from the history tree as opposed to the model window. It will let you pick exactly which curve you need. You can even label the 4 boundary curves so you kow which ones to pick in which order.

“Fill Surface” tool shows you isoparms when building the surf. Don;t know of a setting that turns them on and off though like in Alias. SW displays tangency only when you’re creating the feature.

Here’s how I did this…

surface loft to create main surf
elliptical surf extrude to be used as a trim body. (currently hidden)
2 new curves based on the master ellipse
project each curve individually onto the surface
make a 3d sketch to add points where the 3d sketches meet.
add a center line sketch
use Surface fill to create the surf. 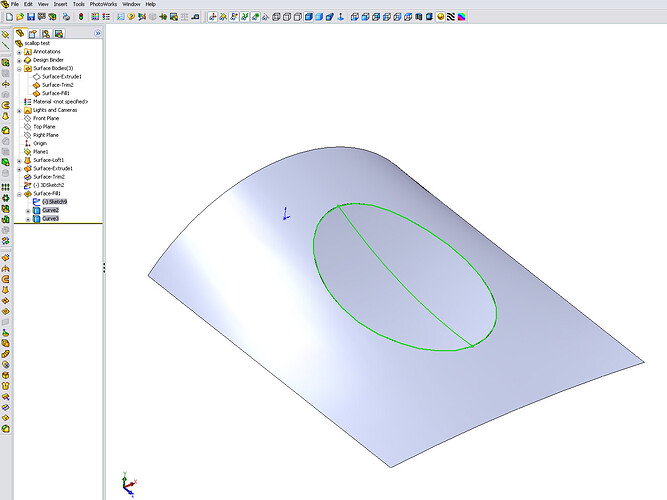 which is how I built it. My question is about creating the the last loft/boundary surface if the underlying curves are not broken up perfectly. If the elipse is made into four instead of broken into two. How do you select one edge of a surface and add to that edge to get a longer edge past the tangency?

I am just pushing this thing. Maybe the work around is to modify the underlying geometry to be the precise two curves like we did. On Pro/E using the shift key adds another edge to the selection of one curve in the first direction. I hope this makes sense. There must be a key selection option to get across the broken curve tangency issue.

About the fill surface. I have been playing with that quite a bit. I am thinking of some applications for that to make some tutorials. I just noticed now it shows the tangency line. Cool. Thanks so much.

What is the best way to insert a jpg or tiff into a sketch? “Path plus ID sketch” as pointed out in that hair dryer camtasia capture. Insert Picture does not allow you to rotate out of flat. And the camtasia video capture looks looks like the insert is a separate sketch feature.

great. now how do you get reflective geometry into the geometry. I want to evaluate the curvature continuity and study how light reflects off the geometry w/o using zebra stripes.

I want to paste hi-rez imagry into the light reflections as if real time render. Is it “Real View Graphics” … so where do I add the images to be projected onto the surfaces.