Did you identify with the tale?

hello green room! I work for a webmagazine on sustainable development and we’ve just published a designer’s tale to start a conversation on social design, would love to have you guys comment if it could be of interest, anyone?

THE KING OF BLUE AND YELLOW

PS The english version is towards the bottom, we’re still mainly in italian unfortunately

Had some people tell me it was hard to find so I’m posting the tale directly here:

The story that follows is an attempt to personify and clarify one of the most challenging situations we as designers find ourselves up against when we try to present or implement sustainable solutions. It is meant to inspire, provoke and possibly indicate tools and resources both internal and external that can help us resolve and effectively communicate sustainable solutions that necessarily involve a 360 degree vision and exploration. Based on the work by Paola Santagostino on the use of fables as an instrument for problem solving on many different turfs; â€œThe use of imagery in a story is able to convey a message more incisively making it echo on an emotional levelâ€ and hoping to contribute a new approach to some of the problems faced by the sustainable design community.

THE KING OF BLUE AND YELLOW

Once upon a time in a far away land lived a king who could only see blue and yellow. One day the artisan of the kingdom brought him a bowl, a wooden bowl he had just turned on the lathe, he was so excited about the intricate patterns the shape and wood grain had created that when the king said â€œCould you paint it yellow?â€ he was deeply disappointed and frustrated. Think of it! Ruin the beauty of his work by painting over it!. The kingdom had become dichromatic, everything was either blue or yellow nothing in between for the king could only distinguish objects in these two colors and pretty soon the people of the kingdom began to forget that other colors existed.
One day while taking a walk through the forest far from the kingdom where he no longer found inspiration nor felt at home a dove came flying down to rest on his shoulder. He was curious, astounded by the fact that she had chosen his shoulder out of all places to rest on. He sat still listening to itâ€™s gurgling sounds, had she not been a dove he wouldâ€™ve sworn she was talking to him.
Suddenly, she took flight towards a part of the forest that had long ago been very familiar to him, he decided to follow, she seemed to be waiting, flying from branch to branch until they got to an old cabin, he rememberedâ€¦ this was the cabin where his father had once worked making essential utensils for the townspeople long before the kingdom had been established. Memories of his childhood came back to him along with the words: â€œShould you get lost, go back to your roots.â€
He looked around the abandoned shed and a peculiar box caught his attention, drawn to it he opened it and found what he was looking for. Inside was the egg shaped crystal. The legend he had heard so many times from his father said, â€œif you look into it with deep desire in your heart, you will find the answer youâ€™re looking for.â€ Hands unsteady he took the egg and looked into it, his heart pounding wishing to become what he was meant to beâ€¦.
Suddenly all was clear, he understood why the king had him paint everything in the only two colors he could see and he set his hands to work at once.
He worked all night and what he made was of indescribable beauty an object so desirable even the king would be able to appreciate. He went to see the king immediately, when he arrived he said â€œI have something to show you your majestyâ€, â€œWell, go onâ€ said the king. The artisan gave him something wrapped in blue velvet so soft to the touch the king was seduced and eager to see what this precious material held inside. What he saw bewildered him, he had never seen such intricate details and so many shades of blue!, he stood there looking at it for a long time enjoying every minute when finally the artisan said: â€œWhy donâ€™t you try it, your majesty?â€
â€œWhat is it?â€ asked the king
â€œIâ€™ll show you, come with meâ€
And so the artisan took the king to the forest, his favorite spot surrounded by many shrubs and flowers of many different kinds. The king was hesitant, he hadnâ€™t been in the forest for the longest time, it made him anxious for he could not discern shapes, green was not a color he could see.
â€œHere, let me help you, your majestyâ€ said the artisan helping the king look through the object he had so carefully designed and made. For the first time the king was able to appreciate every detail, he could see greens, reds, oranges, purples! A world of color he could never have imagined existed, he was so excited, like a child exploring the world for the first time.
From then on the artisan enjoyed his work greatly, his sensitivity for the needs of people were heightened and he was continually stimulated by the king who had become his best critique. The people of the kingdom lived happier better lives and he was able to create knowing that his work would be seen through the eyes of the seeing. 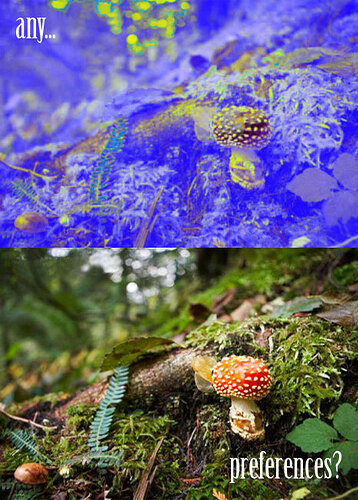