So, this kind of upset me

Is it just me or does this offend your sense of integrity as a designer? I thought we worked hard for the last 5 decades to show that what we do is more than this, and then an advert for essentially enclosures with free ID is on a design website… 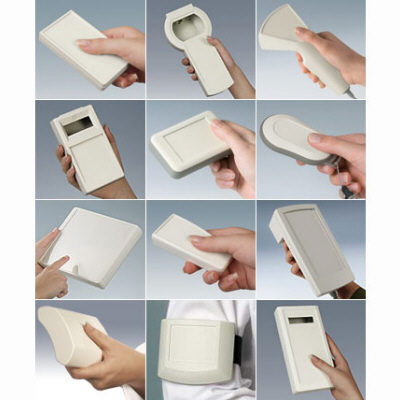 You design the inside, OKW Enclosures will take care of the outside - Core77

Part of the pleasure of being an industrial designer is getting to determine the exterior form of the object you're working on. But let's say you're designing an electronic gizmo--something like the scanner/signing board the UPS guy carries--and...

Yes. But I imagine that if a client chooses this route, the end results can’t be compelling to move the product. These designs are already antiquated right from the catalog. There’s nothing compelling. Plus, I’ve always had to design for DFMA and I’ve never met an engineer who will create internals based on an existing enclosure design. I’d get b*tch slapped if I told the design engineer, “I’ve already surfaced the casing. Can’t you just fit your boards inside?”

…Last, I believe the earlier video posted on another topic describes this best:

I do not take offense. The cases they sell look acceptable in a basic way, come in a wide variety and are tooled up and ready to go. For the ID they are talking about, a function, a purpose, “like the scanner/signing board the UPS guy carries”, you need to get it out in the world and try it out, see if it works. What is the failure rate of new products? 95% or greater? Does the world need another unique solution ABS enclosure for basic electronics?

This approach saves tens of thousands of dollars and months for a start-up. I like to know this company’s products as a resource for when I need 10-20 cases for prototyping or experimenting.

I don’t take offence either… companies have had this choice before this blog post as well, there’s plenty of off the shelf enclosures available for companies. Asian parts catalogs have tons

If companies don’t understand the value-add of a designer creating a custom design for their product, they can suffer the consequences of a poor ID. It seems like a similar argument for someone saying an engineer can do the ID - let’s not hire a designer. Or using that guy who was ranting about generative design.

I’m with travisimo, these are essentially Radio Shack project boxes. These are for projects where the production is going to be in the tens or prototypes.

Think of it this way, this type of stuff only makes your stuff look better. As was mentioned above, there may be a place for this type of thing for smaller companies not looking to mass produce a product and don’t have the budget to spend on an ID firm. It falls into the “you get what you pay for” category.

My Dad works for a company that manufactures concrete pipe machinery. Most of the control systems they develop are job specific, and I could see them using a housing like this to control some aspect of the machine. They don’t care how it looks, they just need something to hold a board and display and a button to push. It works, and the guy operating the machine can do his job. Is it the best solution? Will it work better than one designed for the task? Maybe, maybe not.

It cheapen’s any value on design, and makes the designer far less important in their roll in the company and the work they are doing.

Considering we designed the thing that the UPS (and FedEx, and USPS, and DHL) guy carries, thats a pretty big F— you.

It cheapen’s any value on design, and makes the designer far less important in their roll in the company and the work they are doing.

Sometimes, design needs to be cheap.

My point is that it is on a design blog and the suggestion to designers that read the blog is:

"Part of the pleasure of being an industrial designer is getting to determine the exterior form of the object you’re working on. But let’s say you’re designing an electronic gizmo–something like the scanner/signing board the UPS guy carries–and you’re too consumed with the interface to deal with the form. Then what do you do? …What you do is go to an Enclosures Specialist company "

I’m upset at a good 10-20% of what’s on the blog that seems to either be not-design or too art driven. This is a good example. Join my club!

I dunno. I think it is very appropriate.

Not at all explicit in the post, but I see how it is relevant to designers as a practical solution and perhaps has a message. Not all things need to be designed, and not everything should be custom. Lots of projects use off the shelf components and this may be a good resource for them. Same as any McMaster catalog for screws or hinges.

Also, personally I kinda like the idea of this. Some of these beige boxes are nicer than some over-designed stuff I’ve seen in real life. Sure the quality of them isn’t so hot, but imagine if there was a company that did this, but nicely? Like Muji/Braun/Apple quality enclosures.

So many kids of tech these days is just a box with X functionality, why have so many custom boxes? I’ve love it if all the boxes beside my desk were the same black box and could stack. Cable Modem, Harddrive, Wifi,…

Cyberdemon: Any of those boxes would look like crap next to the UPS handheld

Yo & 914: totally agree… didn’t understand your point at first. Much more appropriate for an engineering or hobbyist blog (on second thought, might not be a good idea to put in front of “some” engineers)

RK: I always wondered why so much design went into the boxes next to TVs and plugged into PCs too. They never look nice together and seem to scream for attention when they are just a gizmo you have to have, but don’t want to see

I used to do a lot of work for startups that just needed a custom designed plastic for 5-10 RTV prototypes, to sell their product. They might have considered this kind of thing, but in overall the designed protos were more effective because it didn’t “look” like they just picked some generic box out of a catalog - they looked like a real and considered product, even if they were quick designs. I guess as the off the shelf stuff gets nicer and nicer, using them might make sense for more simple products.

My point is that it is on a design blog and the suggestion to designers that read the blog is:

"Part of the pleasure of being an industrial designer is getting to determine the exterior form of the object you’re working on. But let’s say you’re designing an electronic gizmo–something like the scanner/signing board the UPS guy carries–and you’re too consumed with the interface to deal with the form. Then what do you do? …What you do is go to an Enclosures Specialist company "

I guess my issue is that the real answer would go something like this:

"But let’s say you’re designing an electronic gizmo–something like the scanner/signing board the UPS guy carries–and you’re too consumed with the interface to deal with the form. Then what do you do? "

Then you work 80 hours a week, desperately try to hire a new UX designer, push the schedule back 6 months and get the design right because UPS is going to knock down your door for anything they don’t like and make you change it after you’ve already cut the tooling. And they don’t care that you don’t think brown isn’t a flattering color for the CMF. They want it anyways. Oh yeah and why doesn’t the battery last 28 hours yet? Get on it!

the idea of the company doing this, doesn’t bother me in the slightest. As many already noted, this is fantastic for hobbyists, very low volume or one off products, etc. Or, for those who simply don’t, and never will have a concern about design.

As for a Design Blog? I don’t have a problem with the blog posting it. It is the matter of the context. This kind of company isn’t a threat to Design as a whole…as long as it is provided as a solution to a specific need.

If its treated as, “I don’t have time to design the housing because I’m too busy on UX”…that undermines the wholistic belief that design is important.

If its treated as, “I don’t have time to design the housing because I’m too busy on UX”…that undermines the wholistic belief that design is important.

That is the point I’m poorly trying to make, thank you.

I’ve used “off the shelf” enclosures for one of my “industrial instrumentation” clients. NEMA 4X requirements, low volume, and budget combined to limit the time we could spend on the exterior (testing for the NEMA rating would have cost as much as tooling). My time on the project was spent on user interface (front panel membrane facia) and designing a mounting system for the motherboard that facilitated quick interchange of various PCB “function modules” that allowed the customer to add-on to the basic data logger.

The product got out the door, made money, and eighteen months later, I commissioned to design a proprietary NEMA 4X enclosure for the company. If they had not gone this route, nothing would have been produced. As “designers” we solve problems for our clients. Knowing how to cut corners and save money is another tool that can benefit the client.

OKW products aren’t that bad. At the very least, a designer somewhere, is working. … .

OKW products aren’t that bad. At the very least, a designer somewhere, is working. … .

Agreed, LMO. This is far less about the context of whether this is appropriate business model. It is…frankly.

It is that Core77 does represent the Design Community. And Hipstomp’s comment of saying, I’m too busy to focus on the wholistic design, is a comment that is a bit “et tu, Brute”.

Basically, Hipstomp is getting spanked here for a poor choice of words.