As a part of class I volunteered to spend a couple of hrs a week at an organization where they cater for the poor. They had this program where kids come to do something instead of hanging out having nothing to do. Since we are art/design students, we tried to contribute the best way we can.

So today was just a “wassup” session and we got them to doodle on paper. I brought in my freshman car renderings and stuffs and this mini-Eminem ( the only white kid in the group ) wanted to design an Escalade. So I was like," Yeah, your wheels ain’t big enough!"

He was talking about bigass spinners and joking about crack. 10 yrs old.

Then a girl drew this one-point perspective city scape that we all have done before, with a black pencil dot in the center and a sun half eaten by the landscape. She said her teacher is teaching 1,2 ad 3 point perspective and it’s really hard. So I asked her," What’s this line across the drawing?"
" It’s the horizon line"
“So do you know what’s the horizon line?”
“Hmmm… no”
“It’s the line of your eye-level”
“OH!!!” Her eyes almost popped out.

Then I went on to show her how to draw people on the same ground/space but in different distance.

She said she’s going to bring in her other perspective drawings in to show me. I think I am going to make her kick her teacher’s ass!

Those kids are between 10 and 14, although unfortunate but smart kids nonetheless. I wish this started a lot earlier, cus we only have 3~4 weeks left.

I realized that the older those kids get, the less confidence they have. Or rather, more afraid to try. This 14 yr old kid says he wants to draw shoes. So I asked him what sport does he do? Football. So I said try draw a football shoe. He didn’t know how to start. So we suggest him to draw from his own shoe. He wasn’t moving. so my friend put his own shoe on the table. That kid tried for like 5 sec and then gave up. It’s hard to get him started, but that’s what we hope to do, and get him to believe that he can take on the challenge and finish it.

Now I’ve promised to make copies of my bling car renderings for the mini-Eminem.

sounds dope
keep up the good work, I’d like to hear more about your experiences

Some of the people where I work have been working with the local Boys and Girls club. One day we did a workshop and broke up into teams to to do some basic modd boards and sketches around different products. I think the kids had fun, I spent most of the day preparing images, posters, etc. then had a meeting run way over and missed all the real fun. Looking forward to this year though.

It’s kind of hard to get them to focus to do something. We want them to feel that they are the ones taking charge on how this project goes, so we don’t want to make it sound like they are working for us. However, I personally want to make this purposeful for them. 2 hrs a week for 3 weeks isn’t much at all, and I really want to get them into a process which they can realize their own abilities.

In a group of 10++, it’s cool that they feel comfortable and were talking and joking around. It’s just hard to get them to do what they are supposed to do without putting it too direct. We are going to split up the group into smaller groups according to their interest and what we can offer. Hopefully, in a smaller group of people with similar interest, they will be able to focus better.

I think getting everyone on the same page (similar interest) should help get things going in the right direction.

You might also try turning some of the group talking and joking around into a brainstorming activity. This way the kids can still get some socializing in while contributing.

I feel for you though, in high school art class, I couldn’t focus for more than 4 or 5 mintues with out getting totally distracted and talking to everyone around me, and I loved to draw!!!

Well, the others in the group are all illustration kids. They do things the spontaneous way. I was trying to push from the side to get them to get things going.

I personally would like this to be more fruitful. I wanted them to decide a project they want to pursue and I will be there to guide them through. It’s more like a mission and something they will use as a challenge for themselves. I want to let them know that they can and have the right to take on challenges that they never believe they could do.

NAh, the group ended up just wanting them to make a scrapbook for themselves, like painting the cover and crap. Same old trick. I don’t know. The kids are having fun, but I’ve got my anticipation too.

The kids were told to draw their self-portrait for the cover. Many of them began with saying that they don’t know how, and wanted to do cars or shoes ( as expected ). Basically, I wanted them to be doing something that they can’t wait to carry on. I even wanted them to think about it, or even work on it between sessions on their own time. Right now it’s merely a once a week thing where they come, draw some stuffs and we keep it for them. Then they come back and draw more stuffs… I kind of want them to be doing what they can/want to show around constantly. We keeping their work for them may sound like it’s a homework. I think we need to have the mindset that this is really more for them and less for ourselves.

There are 3~4 weeks in total. I wanted this to be a process(doing a project like designing something they like), not the final result( making a scrapbook cover). I want them to have things to tell their peers, things that go beyond what they show on the final day.

Seriously, what if you had your class turn the drawings into cardboard models or make the scrapbook a fold-out book with fewer pages. Maybe they need something more accessible for inspiration like those Rides TV episodes where they document the design and development of a concept car?

Dude, this kid is awesome. He cracks about cracks from time to time.

Today while he was drawing away, he said there were SWAT teams by his house the other day going after crack heads. Yes, he said “Crack heads”. He then said the SWAT team had bullet proof vests and shotguns.

The kids next to him just continued the conservation saying,“Yeah, there were SWAT cops at my grandma’s place the other day too”

What’s amazing is, they just talked about it like it happens everyday, no surprises. It was more like a chat between co-workers in an office over the cubicals. Detroit rox!

Seriously, what if you had your class turn the drawings into cardboard models or make the scrapbook a fold-out book with fewer pages. Maybe they need something more accessible for inspiration like those Rides TV episodes where they document the design and development of a concept car?

That’s similar to what I would like them to do, but I am out numbered 4:1. All the others in the group are illustration kids. I don’t know how much thinking do them put into their work, but I have dealt with 3 dimensional work most of the time and it requires thinking that goes way beyond the piece itself.

I’ve got it… robots, walkers, mecha.

Draw them. Transfer to cardstock, cut out and stick together. Start with something simple like an Optimus Prime then the more esoteric.

Is that you in the green?

No, I’m behind the camera. I thought you’d be smarter…

You should really help that football shoe kid out, his shoe looks like a damn parrot.

He’s looking at the pic on the color pencil box.
Haha, no. The football shoe kid showed up for a bit and left.
I did this when I was a freshman though, brought it just to spice things up. 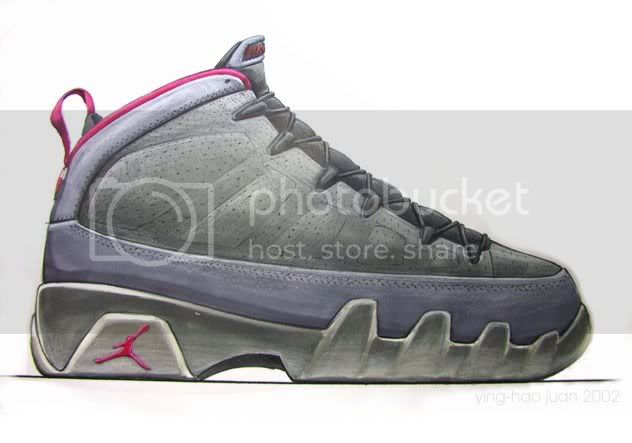 kickass for a Freshie rendering.

There’s no way that I am going to spend 3 hrs on this kind of thing now, but it was fun.