Hi all, I wish I found Core77 a long time ago! It is a treasure trove of a lot of stuff that I had difficulty finding online before.

I was sketching a table lamp concept and I am having trouble rendering the glass in photoshop. In class, we saw demos on how to represent thin sections of glass – such as cups and thin-walled hollow cubes. However, I’m having trouble because my idea involves more solid plates of glass.

I’m also having difficulty rendering the idea of a lamp. Are there any common ID sketch conventions covering how the table surface should be lit, and how to render the light coming from the lamp?

Any help/critique would be greatly appreciated, thank you! 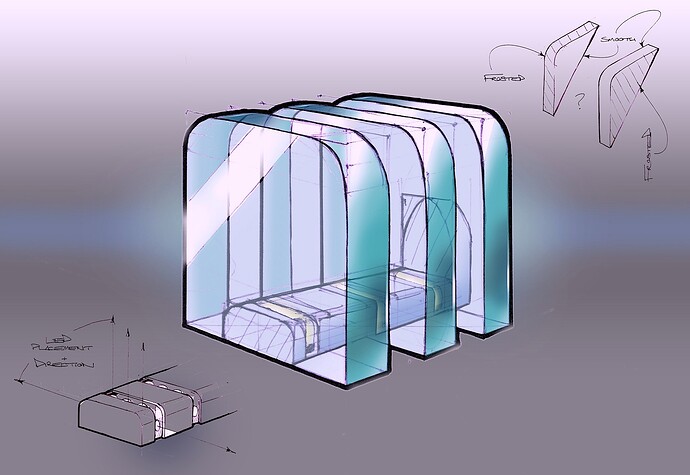 If you can’t find photos of what you’re trying to replicate, go to a glass shop (Home Depot even?) and find a thick piece of glass and observe how it reacts.

Try to replicate exactly as you see it in a photo and then move that to your rendering.

If you can’t find photos of what you’re trying to replicate, go to a glass shop (Home Depot even?) and find a thick piece of glass and observe how it reacts.

Try to replicate exactly as you see it in a photo and then move that to your rendering.

Thanks, I will try looking for some more pictures of thicker sheets of glass.

If you’re interested I could CG render it according to real-life values, which would be accurate enough given you’re drawing it by hand… The other thing is that sometimes drawings are purposefully non-physically realistic because they emote what it is rather than trying to emulate it and humans understand that better in some cases (reflections / refractions come to mind here).

How thick is the glass, exactly? What kind of light source is inside the base / dimensions for those slots etc.

Just vague dimensions, the rest can be made up pretty easily.

IceCalibre – Thank you, that is a very generous offer. However, I am still working on this idea (and it is currently on hold until schoolwork eases up), especially since I have found out about a lamp that has a lot of the same ideas, the Louis Poulin D1 desk lamp:

I’m currently thinking about ways of making my lamp different enough (probably both looks and function) from the above lamp. So I wouldn’t want you to waste your time when I am iffy on my own ideas.

Do you have a Coroflot or other site with your sketches and models? I’m playing around with Rhino and your recommendation about sketching and 3d modeling helping one another sounds nice. It would be nice to see others who have combined the two. It’s fun when sketching to think “okay, let’s extrude this curve” and “let’s trim using this shape.”

Here is my idea for the interior. The glass is going to be .75" thick to accommodate the LEDs, but I might look at those 2x3x4mm square LEDs. The thin glass on the side could be too weak so that will probably also change.

I’m in the process of bringing Brennanletkeman.com up to speed, so unfortunately it’s lacking in complete works, but there is some 3D stuff there. I’m still trying to find a nice way of presenting sketches since straight scans of my various notebooks aren’t exactly presentation quality and photoshopping pages and elements together looks and feels fake and wrong so.

But! You’re welcome to check it out.

Are those bottom renders yours? They look good! but aren’t exactly physically accurate (I’m not sure if Rhino does more internal ray bounces than that?)

Either way, yeah, let me know and I can try to help out. I mentioned before sometimes sketching how light behaves looks wrong and so artists often cheat to appeal to the human conception what it should look like vs. How it actually looks.

Thanks! They are mine but I will have to find out what options there are for Rhino/Vray internal ray bounces.

I love your renders, especially the aqua engine desktop one. The “Abandoned” photo series really caught my eye too.

Thanks for the tips too. However, I think it might be a little while before I get back to this desk lamp idea. Sometimes you step away from something for a little while and the idea doesn’t hold your interest like it did originally . . . which will hopefully let me look at the idea with a more critical eye.

Thanks, I wish I had more of my work to show; that stuff is getting years old already, haha.

But yeah, If you aren’t fired up on a personal project it’ll show in subtle ways in your work. Since you don’t have a client / deadline, take some time and come back when you have awesome inspiration. I like the idea, there are others around, true, but there’s definitely room for a cool aesthetic there.

And if you ever need, my offer always stands.