So I had some time to revise 1 more concept over this break and I thought I’d share. Based on some of the comments from the previous concept sketch mileage review, I thought I would work in piece meal and try and see if anyone had ideas they would like to see for an interior and or some front/back end designs. Let’s see how this goes… 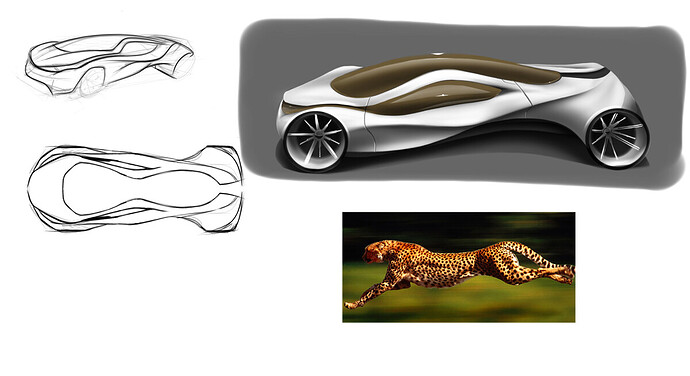 I would suggest maybe doing another round of refinement on the exterior side view. There’s a lot going on right now, I think you could edit/tone down some of the features and focus in on some of the main themes better.

Your wheelbase is really long right now, probably 4+ wheels, when most supercars are 3-3.5. The stretched wheelbase might work since you have so little overhang, but I think right now it’s looking a little too exaggerated.

thanks for the feedback, choto. I think it may be easier to start a new side view sketch and refine it. Tandem seating is a good idea and I think it will preserve the proportions a little better. However, I think I may do a 2+2 coupe version of this and see how things turn out. I think I may try and refine this design in CAD and see how the final development works out. It’s easier to capture the main themes in sketch form but translating that in CAD may be another beast…thanks again.