Yurri87: Clean rendering man, what did you sketch on? what paper? Kind of markers?

Crewkid: I like the designs, maybe you could add a little bit of black somewhere.

Humancargo: how is your lebron concept going?

jknodell: Where do you get your textures from?

I get textures from anywhere I can really. Sometimes I’ll scan things I already have or from my materials library at work. A lot are just internet searches. Flickr, Google, Yahoo. Sometimes I’ll make my own, or combine textures. But usually it is easier to fine one somewhere then modify it to my needs. I try to be sure they are free to take.

you could go there for free high-res textures. But I think the site shut down a couple days ago, sadly enough. Hopefully it will come back online soon.

I said I would do this a while ago but never did.

I created a little demo for my process.

Hopefully it makes sense and maybe is even helpful. 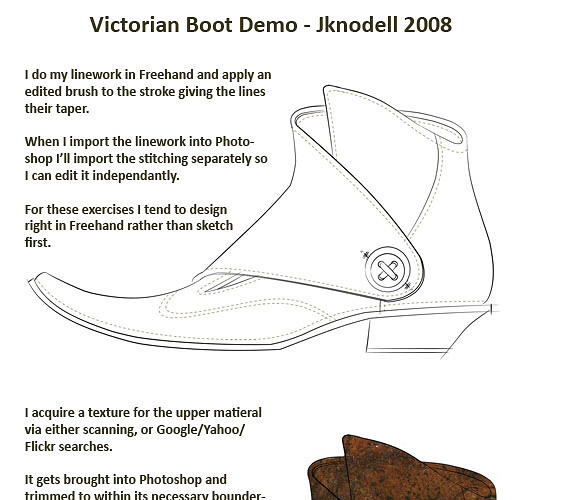 thanks flight, any feed back other than color? Color can be changed at the snap of the fingers, i was hoping for some feed back on the designs. a favorite or a least favorite at least.

jknodell:
Thanks a bunch I am in the rendering learning stage so this will help tremendously.
I’m also going to follow this very informative post and tutorial posted here:

Just a quick post, to let everyone know Im working on a Footwear Photoshop rendering tutorial over at my blog, First Pullover, http://www.firstpullover.com I was planning to also post it here, but ther eare just too many images to do it easily (40+) and uploading all through flickr is a pain. Please see the blog, but feel free to comment and add anything here. If you have any specific hints, questions, etc. throw them down here and ill try to address them in the tutorial. UPDATE- Complete tut…

flight:
I went special ops with the Lb joint, I’ll post secret spy shots later and thanks for you input although you eliminated the support device altogether

I hope you saw the few posts after yours where I started doing the three versions of the same idea layout.

I’m still trying to find the best shoe design to learn rendering on. I need something with multiple textures and material usage while trying to keep the styling fairly simple. It’s going to be a long day.

jknodell,
I was just riffing on your cowboy boot reference. I wear cowboy boots constantly myself. After I posted, I thought, who the hell am I to say to add some height to the heel. I love 'em just as they are and would buy pair in blink if I could.

JK: Thanks for posting your process! So when you say you are doing your lineart “freehand”, you mean as paths in PS correct? So are you using the magic wand tool to select your areas and trim your swatches etc???

yurri87: I think the one you didn’t finish is the most interesting profile shape,(lower left). What type of shoe were you thinking of there? Runner? Trainer?

humancargo: I have heard a good place to start rendering is to take an existing photo or shoe and try to render it realistically. Also, remember that there is no rules to rendering. Once you have the basics, create your own style. The tutorials from jknodell and rkuchinsky are a very good start.

jknodell: I love to see everyone’s methods. Your results are impressive, so I am sure everyone can learn a thing or two from you.

Heres a little more progress on my Lebron Soldier. I went with his high school colorway: 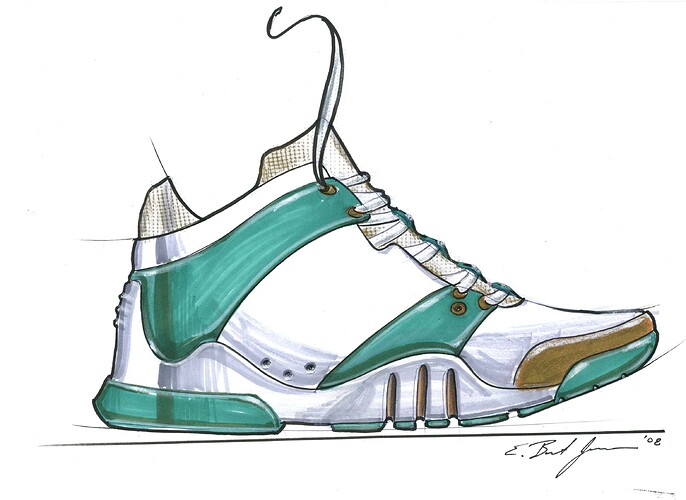 Hey guys. I finally redid this shoe that I posted earlier and did a medial view. Top image is the lateral. Let me know what you think.

JK: Thanks for posting your process! So when you say you are doing your lineart “freehand”, you mean as paths in PS correct? So are you using the magic wand tool to select your areas and trim your swatches etc???

freehand is just another program, similar to Illustrator - vector based so similar to doing paths in PS or line art in Illustrator

My revised Lebron Soldier. Any comments?

Nice 1ofthesedaze, what is the shoe made of?

Reggie: make sure that all your red lines are moving in the same direction, or are parallel to the red support piece on the heel.

as IDiot stated, I use the program Freehand. I’m a little bit old school, still getting on the Illustrator band wagon but I learned Freehand in college and in my field, didn’t need to learn illustrator.

Someone else asked about trimming out materials. I don’t often trust the magic wand tool, but it can certainly get you started. In fact, you could probably use the magic wand tool then expand the selection area by a few pixels and be good. But I tend to use the polygonal lasso tool or simply the eraser and a round brush with no softness. There’s more than one way to get a job done though. This works for me.

thanks for checking it out.

snickgrr: it’s cool about the heel…I thought that’s what you meant. many of my designs have a typical cowboy heel so I thought this would be a more casual approach… i.e. a loafer style cowboy boot.

Thanks ID and JK. I hadn’t heard of Freehand.

Flight- It would be leather with the blue being synthetic. Then there is mesh around that and lycra underneath the mesh for the tongue. The dots would be little plastic pieces, I believe it is called RF weld, but not certain.

I wish i had time to work more on it this week.

Kershaw- thanks alot man, your right about the laces,definately overlooked that when i was sketchn them

flight- thanks alot, umm i think i jus used some regular hp printing paper, i used prismacolor markers and pencils and ink pen for the lines so that the marker wouldnt bleed into an unintended area

ScriptD- really? its a running shoe, when i scanned it in it didnt show up because i started with a 4h pencil, but ill finish it and repost it later